Share All sharing options for: MARCHIFORNICATION 2012: The Fourth Man 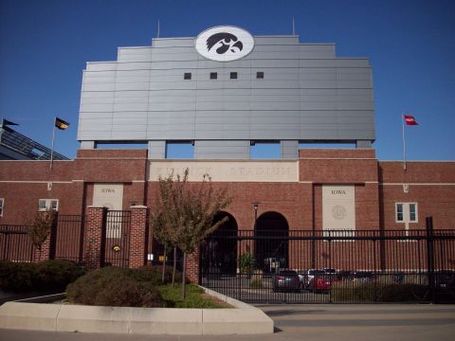 On the field at Kinnick Stadium, Kirk Ferentz, Ken O'Keefe, and James Vandenberg are talking

Gentlemen, we face our most formidable opponent yet.

Gatens and Brommer are formidable enough by themselves, but McCaffery doubles their effectiveness.

And Barta is...well, he's Bloodpunch. He's ruthless, and he's power-hungry, and he'll use every one of his connections and every bit of his cunning to win.

We need a fourth man, and he has to do something we can't do ourselves.

What about Canzeri? He's a Danny Woodhead-type player. They don't have one of those.

Get him in here.

/runs out of tunnel

AIRBHG has been eliminated by technicality

We need to brainstorm.

Getting ready for the draft.

Transferred, and kind of hates you for beating him in the first round. Also, you sort of made him a linebacker.

Where you goin', what you lookin' for?

We could promote Soup Campbell.

Non-starter. No experience at this level.

What about Greg Davis?

Yeah, like I really want the fourth member of our team playing from the press box.

You know those boys don't want to play anymore for you

Seriously, what is that?

Coach, I'm pretty sure that is "Sister Christian"

Did you say "Sister Christian"?

Yeah, they really need to upgrade the music around here. If I hear "Black Betty" one more time I'm going to --

Call the Commissioner. We have our fourth man.