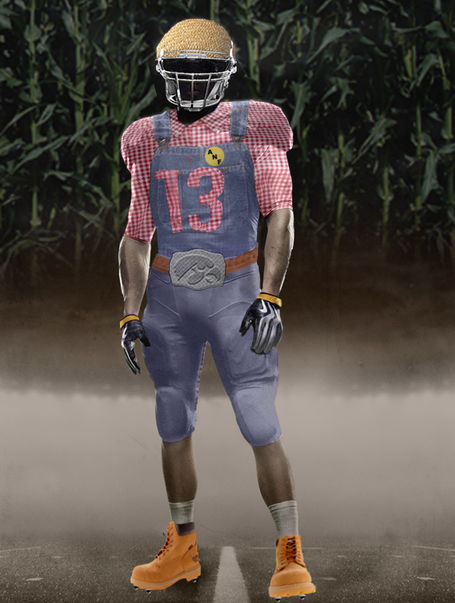 The Hawkeyes are going into combat -- Pro Combat, that is. Nike has announced that the company will be producing a version of the hyper-stylized uniforms in connection with the Iowa's "America Needs Farmers" game against Penn State on October 20th.

"When you think of Iowa, you think of farmers," said Nike head designer Christopher Polyblend. "So our challenge was to combine the vaguely futuristic, Tron Legacy-esque look of the Pro Combat brand with the traditional agricultural values of a state where, as I understand it, 99% of the residents spend their days covered in hog shit."

"We think we pretty much nailed it." 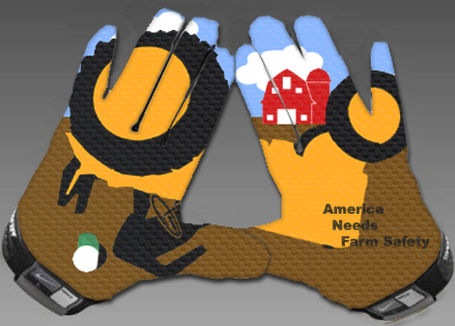 The gloves that will accompany the Iowa Pro Combat uniforms promote farm safety.

The uniforms feature several advanced technological features (see infographic below) and will be used only once at the 2012 ANF game. When asked about the uniforms, Iowa athletic director Gary Barta reported mixed feelings.

"We certainly appreciate Nike's generous donation of the uniforms, and it's always good to know that Iowa is thought of in the same breath as the other schools that wear the Pro Combat uniforms -- such as Ohio State and Oregon -- but... you know, the days of the gingham-clad, straw hat-wearing family farmer have pretty much gone by the wayside. Farming is more of a corporate concern these days."

"Still, it is nifty the way they incorporated polyester and denim in the overalls."

When asked, the Hawkeye players had mixed opinions concerning the new uniforms.

"I am not wearing this," said Iowa tight end C.J. Fiedorowicz.

"I am not wearing this," said defensive back Nico Law.

"I am not wearing this," said quarterback James Vandenberg.

"I am not wearing this," said defensive lineman Carl Davis.

"They look like jeggings," said linebacker Christian Kirksey. "I am not wearing this." 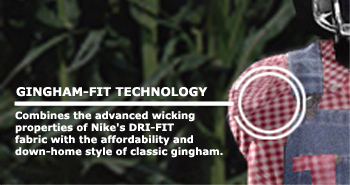