It's Not Plagiarism If You Link To It: The Brian Ferentz-ification of Iowa Football?

Share All sharing options for: It's Not Plagiarism If You Link To It: The Brian Ferentz-ification of Iowa Football?

THANKS ROSSWB FOR THE TITLE. Kirk Ferentz met with the media for one final time to wrap up the spring session yesterday. (Full transcript | On the side transcript | Ferentz video). He was in a joking mood and perhaps, this spring, we saw glimpses of a new Iowa Football and new Kirk Ferentz. There were weekly press conferences with all the position coaches and new offense and defensive schemes. There's also a new commitment to recruiting that's hauled in six verbal commitments before the end of April. There was even talk of Nike Pro Combat uniforms.

When Iowa hired LeVar Woods and Brian Ferentz we believed that the program would be injected with youth and enthusiasm. It's what we fans wanted, a change from what had grown stale. Is that what's really happening here?

LeVar Woods had been in control of Iowa's social media accounts and assisted the staff with recruiting prior to his promotion to linebacker coach. He's definitely an asset to the staff but the employee to boss relationship may be no different than for you or I in our careers. I believe there's influence from LeVar but not as much as can be from Brian, Kirk's son. If Kirk starts to wear his pants too high I gotta think there's only one person on the staff that's going to tell him he looks ridiculous. That's his son. Hierarchy be damned.

Changes needed to be made both on the field and off. Iowa's brand takes a hit when media labels your program stale. It's recruiting and talent that wins football games. If today's youth wants to wear Pro Combat uniforms or interact via social media you have to have personnel that can understand and communicate on their level. They have to accomplish that and still develop Big Ten caliber football players.

It's a new era for Hawkeye Football. The changes of both coordinators are part of it. The new practice facility, football offices and giant weight room are part of it too. Iowa now has a dedicated recruiting coordinator and recruiting - over the course of three months - is keeping pace with the new industry trend. Eric Johnson, LeVar Woods and Brian Ferentz are taking to Twitter and Facebook to bolster the Hawkeye brand. They are proving to be more than X's and O's coaches. They can also market the business.

Ultimately, Kirk Ferentz and Gary Barta are responsible for these changes. Things appear to be going well but the seven or eight win prediction for 2012 doesn't change. These changes aren't about the immediate future, they are about 2013 and beyond. My hope, moving forward, is that with Brian on staff maybe there's a coach in the meetings that if needed will say, "Dad Coach, that kind of thinking isn't going to work any more."

More after the jump.

PENN STATE AT IOWA WILL BE A NIGHT GAME IN KINNICK. The Big Ten Network announced it's prime time schedule for the 2012 football season. On October 20th, when Penn State comes to town, Iowa will host a 7 PM kickoff. It's the only night game on the schedule this year and the last time Iowa hosts Penn State for awhile as they rotate off the schedule.

FERENTZ SAYS THE DEPTH CHART WILL LOOK DIFFERENT IN THE FALL. There's probably no doubt we can expect some incoming freshmen to appear on the two-deeps before Iowa's first game of the season. Greg Davis mentioned speed, hopefully the new recruits have it.

GARY BARTA LIKES NEUTRAL-SITE FOOTBALL GAMES. I mean why not? Iowa will take a million dollars home from their game with Northern Illinois in Soldier Field. Barta has yet to find another but it's in the works.

HAWKEYE MEN'S HOOPS HAD THEIR AWARDS BANQUET LAST NIGHT. To no surprise, senior Matt Gatens won the Chris Street Award for the 2011-12 season. More about the honor,

The Chris Street Award is presented annually to a Hawkeye player, or players, who best exemplify the spirit, enthusiasm and intensity of Chris Street. Street was an Iowa basketball player who died in an auto accident in 1993, midway through his junior year. 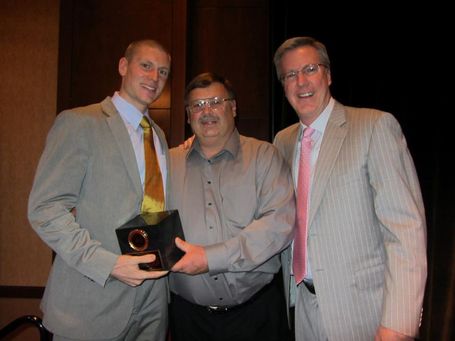