It's Not Plagiarism If You Link To It: McCaffery Offers 2014 Shooting Guard

Share All sharing options for: It's Not Plagiarism If You Link To It: McCaffery Offers 2014 Shooting Guard

BEFORE THE RECRUITING STUFF THERE'S REGGIE EVANS DOING THIS.

PER TWITTER, FRAN MCCAFFERY HAS OFFERED 2014 SG PEYTON ALLEN. Allen is a 6'5" shooting guard from Chatham, Illinois. Allen is part of the Southwestern Illinois Jets AAU program that visited Iowa City as a group earlier this month. Per UM Hoops,

Peyton Allen is a deadly shooter who's range already earned him an additional scholarship offer this weekend, this one from Iowa. Allen has already had multiple games scoring over 20 points in the tournament and led the Jets to a perfect record in pool play.

Both Allen and Cliff Alexander were named to the Chicago Tribune's all-state special mention team as sophomores. Allen could potentially be a Top 100 player when the rankings for the 2014 class are released next year. In addition to Iowa he holds offers from Bradley and Oklahoma State. Several Big Ten schools inlcuding Michigan and Purdue are interested.

MCCAFFERY WAS IN MINNEAPOLIS TAKING IN THE NIKE EYBL. He, or members of his staff, also took in the Nike Spring Showdown in Merrillville, Indiana. It's the early evaluation period and recruiting for hoops is in full swing. In Indiana were the Southwestern Illinois Jets team with Peyton Allen. Also there, Aaron Brennan, a 2014 forward recruit with an Iowa offer.

Michigan is also showing interest in LeVert. He originally committed to John Groce at Ohio but was allowed out of his LOI after the coaching move. He is a Rivals three-star recruit that may be the wing McCaffery is looking for.

HAWKEYE DRIVE IS TALKING TO HAWKS ABOUT THE UPCOMING DRAFT. Brendan Stiles, of Hawkeye Drive, has a one-on-one with both Jordan Bernstine and Adam Gettis. Both talk about their NFL Draft preparations and what they are doing this weekend for the draft. 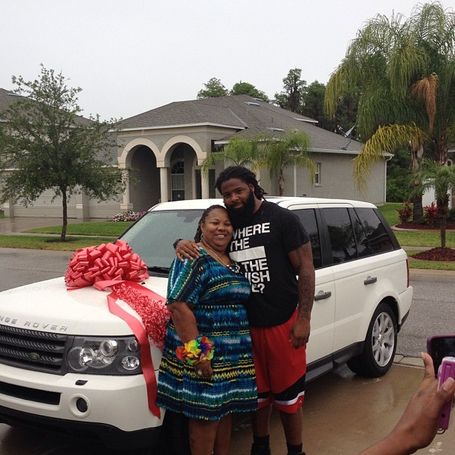 THERE'S THIS, WHATEVER IT MEANS:

At the Arkansas spring game today!

HAWKEYE FOOTBALL OFFERS 2014 WIDE RECEIVER PROSPECT. Austin Roberts "held back tears" after receiving a scholarship offer to play football at Iowa. Roberts is moving from Florida to play football at Carmel in Indianapolis. His dad, Alfredo Roberts, coached for the Tampa Bay Buccaneers and took a job coaching tight ends with the Colts.

BTN'S TOM DIENHART IS RANKING BIG TEN FOOTBALL OOC SCHEDULES AND THINKS IOWA'S SUCKS. Well, not in those words, but Dienhart ranks Iowa's schedule 10th of 12. He does note he thinks Iowa can start 4-0 and because Soldier Field will be mostly Hawkeye fans and Iowa will have zero road games to start the season.

IOWA FOOTBALL ADDS ANOTHER KICKER. Brent Wilker, of Dubuque Senior, will join the Hawkeye football team next winter as a walk-on. Here's some video of him kicking at a Kohl's professional camp.