The Pain Of Second Place: Brent Metcalf And The U.S. Olympic Trials

Share All sharing options for: The Pain Of Second Place: Brent Metcalf And The U.S. Olympic Trials 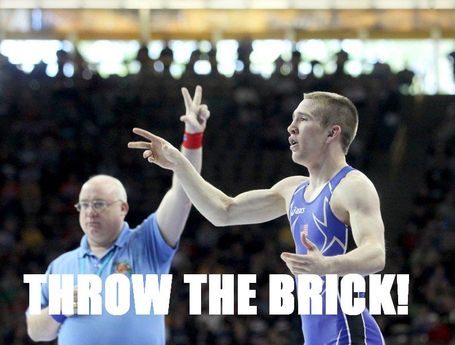 In many ways, the U.S. Olympic Trials in Iowa City this past weekend were a smashing success: they set (again and again) attendance records and the action was (frequently) thrilling and exciting (although not always, but more on that later). In one important way, though, they were a failure: no Iowa wrestler (present or former) made the U.S. team for the London Olympics this August. In fairness, only two Iowa wrestlers were really given a serious chance at making the team -- longtime freestyle competitor and current Iowa assistant coach Mike Zadick (at 60kg) and beloved recent two-time national champion Brent Metcalf (at 66kg).

Zadick bowed out Saturday morning in the Challenge Tournament, losing to current NCAA Champion (at 133 lbs.) Logan Stieber. Brent Metcalf took a dramatic, thrilling route to the finals at 66kg (every single one of his matches Sunday lasted three periods and most periods were decided by a single point), only to come up just short to former Iowa strength and conditioning coach, Jared Frayer. Ultimately, Metcalf was eliminated via tiebreaker -- he had scored a tying takedown in the final seconds of the third period of his second match against Frayer (the finals were best two out of three matches; Frayer had already won the first match between them), but that tying point was overruled by the fact that Frayer's two points in that third period came on a single two-point move -- which trumped Metcalf's two one-point moves in that period. The agony of defeat indeed.

There may be no crueler second-place finish in wrestling than a second-place finish at the Olympic Trials. Obviously, finishing second is always bittersweet -- the goal is to finish first and be a champion -- but second-place in, say, the NCAA Tournament is still a pretty impressive accomplishment. Second-place at the Olympic Trials is still impressive... but the Trials are a classic win-or-bust event. They're a stopgap competition on the way to the real event -- the Olympics -- and the only way to stay on that route is to finish first. Unfortunately, Brent Metcalf couldn't do that. And to take nothing away from Frayer -- he wrestled well and absolutely deserves to win and go to the Olympics -- but that sucks. Chances are, if you're reading this, you think that sucks. The overwhelming majority of the 13,000-plus in attendance at Sunday's finals thought that sucked. Because, frankly, the possibility of Brent Metcalf, one of the most beloved Iowa wrestlers of the last decade, taking first at the Trials and going to the Olympics was definitely a factor in those record crowds that came to the Trials. There's probably more natural affinity for wrestling in Iowa City than anywhere else, but I don't think they're basically selling out Carver-Hawkeye if not for the fact that a few Iowa boys (Zadick and Metcalf) had legitimate chances to make the U.S. Olympic Team.

The good news for Brent Metcalf that he's still young -- 25 years old -- and barring injury, he should still have an excellent opportunity to make the Olympic Team in 2016. (For instance, this year's winner at 66kg -- Frayer -- is in his early 30s.) The bad news is that that's four long years away. There are still important, prestigious tournaments in the interim -- for instance, the World Championships and the United States Opens -- but none of them are the Olympics. And who knows? Given the smashing success of the Trials this year, Metcalf may even have a home-mat advantage in Iowa City at the next Olympic Trials, too. I wish the U.S. Olympic Committee good luck on finding another city that will sell 50,000 tickets to watch wrestling.

No matter where the Trials are, though, Metcalf will need to wrestle better than he did on Sunday to make the Olympics. It was disappointing that he lost to Frayer, but it wasn't hugely surprising based on his form throughout the day: every match was a tense, back-and-forth dogfight, from his opening match against a bumped-up Jordan Oliver to the hard-fought finals with Frayer. Every match Metcalf had went the full three periods and he routinely looked tentative and had difficulty stringing together offense -- in just three of the fifteen periods Metcalf wrestled yesterday did he score at least two points. That's not the Metcalf we came to know and love when he wore a black-and-gold singlet. Maybe it was just an off day for him. Maybe the pressure of the situation got to him. Maybe his opponents just had him scouted too well. Whatever the case, he needs to be better to get to the top of this particular mountain. But I'm sure he already realizes that better than anyone -- and chances are he's already working on ways to improve.

In terms of the other former (or current) Iowa wrestlers in action, Matt McDonough and Phil Keddy had the most standout performances. McDonough, one of several current college wrestlers who received wildcard entries, performed about as expected: he easily bested former Big Ten nemesis Brandon Precin (even using the same sweet headlock takedown he used to pin Precin at a dual in 2011) and recent college competitor Frank Perrelli, but came up short against more experienced freestyle competitors (to eventual 55kg runner-up, Nick Simmons, and Obe Blanc). McDonough should be exciting to watch in freestyle competition once his Iowa career concludes, though.

Keddy was perhaps the surprise of the event from an Iowa standpoint, blasting past Penn State phenom Ed Ruth in three periods (he manhandled Ruth in the final two periods after dropping a tight first period) and beating former Iowa State wrestler Jon Reader in two, before suffering a very narrow loss to longtime nemesis Jake Herbert (who beat him in all of their college encounters, too). There are some very difficult guys at 84kg -- Herbert first and foremost, although Travis Paulson and Keith Gavin are also very good, and Ed Ruth and Quentin Wright could develop into fearsome opponents when their college careers wind down -- but Keddy's performance here suggested that he's not as far away from the top guys as I had previously thought. If he can continue to develop and improve... who knows? Maybe Keddy will be doing a little samba in 2016, too. (Also, I'm well aware that freestyle and folkstyle are different beasts... but watching him take Ruth apart made me really, really wish he still had a little more eligibility left for Iowa. Lord would he be a welcome sight at 184 again...)

And speaking of freestyle versus folkstyle... it was interesting to note the differences, some good and some bad.

* The push-out rule is great and should be adapted by folkstyle immediately. It would really cut down on wrestlers who try to wrestle the entire match around the edges (coughcoughOklahomaStatecoughcough) and it's less of a judgment call than the recently-enacted (but rarely called) fleeing the mat rule.

* The lack of riding time is a major difference between freestyle and folkstyle and while I'm a fan of good mat wrestling, I found myself being swayed to the freestyle point of view (i.e., no riding time) by the end of the weekend. Good mat wrestling is fine, but too often in folkstyle riding time is accomplished by wrestlers simply laying on top of an opponent. Sure, that's often supposed to get you dinged for stalling... but we all know how often that actually gets called, right? There's something to be said for an approach that stands wrestlers back up immediately after a takedown, unless they're truly working for a pin or exposure/nearfall points. I'd be in favor of keeping riding time, but making it harder to obtain -- if you legitimately work for a minute or more to turn a guy after a takedown (or, more likely, a few separate takedowns), then by all means you deserve a riding time point for your effort. But you probably don't deserve a riding time point if you get one takedown and then just lay on a guy for a minute-plus.

* I'm not sure how I feel about the fundamental difference in overall scoring between freestyle and folkstyle: freestyle is best two out of three periods, while folkstyle is the cumulative score over all three periods. Freestyle's method is nice because it doesn't unduly punish a wrestler who gives up a big move in one period. If that happens in freestyle, you probably lose the period, but that's all -- you can still win the match if you win the other two periods. If that happens in folkstyle, you have a pretty big mountain to climb. On one hand, cumulative score seems like a good way of determining who the better wrestler was over the course of all three periods. On the other hand, it doesn't always work that way -- you can have one big period, coast through the other periods, and still win. In freestyle, there's no getting around the fact that you have to be better than your opponent in two out of the three periods. So I dunno - I'm still undecided on this point.

* Challenges are an interesting idea (especially with the GIANT FOAM BRICk that they use to signal them; take that, dopey little red handkerchiefs), but definitely one in need of some tweaking. Too often they slowed the match to a crawl. (And the idea that you can challenge a challenge seems like the sort of absurdity that Kafka or Heller would have dreamed up.)

* Finally, the ball-draw is a totally stupid way to decide anything outside of a lottery pick 'em. I understand the logic behind it: you don't want matches that drag on forever and ever because neither guy wants to take a shot. Folkstyle's overtime methods aren't always satisfying (as anyone who's watched wrestlers go through 3-4 of the ride-out periods in one match can attest), but I'll still take them in a heartbeat over the ball-draw and the clinch. Imagine if a tie basketball game was decided by a coin-flip with the team that won the coin toss getting to attempt a winner-take-all lay-up against the team that lost the coin toss. Or if a tie football game was decided by a coin-flip that gave the team that won the toss the ball at the two-yard line with one play to win it all.