Share All sharing options for: Iowa to play throwback opponent 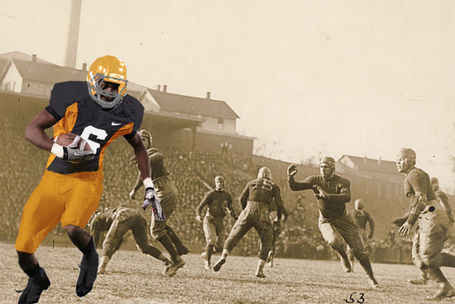 Keenan Davis absolutely destroys his 1922-era opponents in this BHGP simulation of the upcoming contest.

In the latest twist to the "throwback" craze, the University of Iowa has announced that their football team will be playing, and absolutely destroying, teams imported directly from earlier eras. The school announced today that, in addition to wearing 1922-era throwback uniforms in their game against Iowa State, the team will also face off against (and brutally destroy) the 1922 Drake University football team on September 1st. The Bulldog team, coached by the legendary Ossie Solem, will be brought back through time via what UI athletic director Gary Barta called a "HawkGate."

"It was a matter of economics," stated Barta. "Last year we paid Louisiana-Monroe $1.05 million to come play us, and while we won, that victory did not do much to raise our team's profile or improve their computer ranking. By investing only slightly more in this time travel equipment, we will be able to bring in historically great teams from a variety of eras. This should guarantee an interesting game experience for the fans, as well as improving our standing in the all-important computer rankings."

"Oh yeah, and we are going to absolutely bulldoze these chumps."

The 1922 Bulldog team finished 7-0 and is widely recognized as one of the top teams of the era. The match-up will allow football history buffs to settle the age-old question of what would have happened if the 1922 Iowa Hawkeye team had actually played the Drake team. The two schools had a game scheduled, but the University of Iowa canceled their game, allowing both teams to finish the season with undefeated records.

The Drake team was considered a strong team for its era, but will be hampered by its ignorance of modern football techniques, lack of strength training, and by the fact that its heaviest player was 210 pounds.

"Man oh man is it going to be a bloodbath," added Barta, visibly salivating at the thought of Iowa's 280-pound defensive linemen tossing the antiquarian footballers aside like so many tackling dummies. "They haven't heard of the cover-2 defense, zone blocking, or the downfield passing game. Heck, I bet the end around and the bubble screen will even work against them. They will be like little children encountering all this stuff for the first time. It's going to be beautiful."

The technology for the breakthrough was provided by a collaboration between the UI Athletic Department and world-famous Hollywood actor and weirdo James Spader. "I met Mr. Spader while we were both wandering through Oakland Cemetery, waiting for the Black Angel to come to the life, when he pointed out a strange arch-shaped memorial," said Barta. "He told me: 'you know that thing was designed to bring back old-timey football teams from the past, right?' Needless to say, I was intrigued."

After a generous $5 million donation from the Athletic Department and months of research, Spader's team finally found success, bringing back a visibly confused Fielding Yost on March 13th. Shortly thereafter, Barta made the trip back to 1922-era Des Moines, posing as Chet Jones, a supposed older brother to Iowa coach Howard Jones, and convincing the Drake coaching staff to agree to a decisive game in Iowa City. "They think they're playing the 1922 Hawkeyes, so they may be a bit surprised when they walk out and find themselves facing a crowd of 75,000 and a field full of man-mountains that run 4.5 40s", said Barta as he wiped a fleck of foam from the broad grin affixed to his face.