It's Not Plagiarism If You Link To It: The Day The Bubble Burst

Share All sharing options for: It's Not Plagiarism If You Link To It: The Day The Bubble Burst 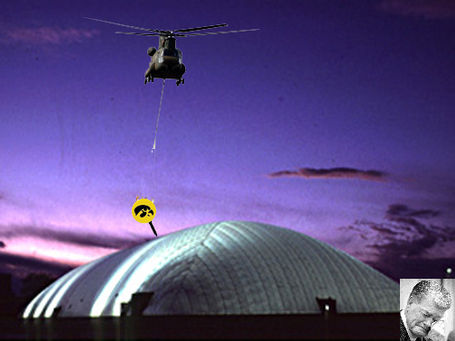 THE PRACTICE BUBBLE POPS TODAY. At, or around, 9:30 am. Marc Morehouse is promising to "live blog" the event. There will be pictures and historical perspectives and a few stories of legend Hayden Fry, which is good.

PAT HARTY IS GETTING NOSTALGIC AND TELLING TALES OF WHEN HE ALMOST RUINED EVERYTHING. Harty is writing about the Hawkeye football practice bubble and it's pending demise. Harty notes a day when the "bubble" almost deflated and at his doing.

IF YOU'RE STILL LOOKING FOR SPRING GAME ANALYSIS HAWKEYEGAMEFILM HAS AN OFFENSIVE BREAKDOWN. Over at HawkeyeNation.com, contributor HawkeyeGameFilm breaks down the good and the bad from last Saturday's open practice. It's quite an extensive look at the spring practice that aired on the BTN last night.

INCOMING HOOPS RECRUIT ADAM WOODBURY INVITED TO U18 USA BASKETBALL TRAINING CAMP. Before Adam Woodbury can get his start in the prestigious North Liberty Prime Time League he'll head to Colorado to hoop with the nation's best. He is one of 24 under 18 year olds that will participate in the event June 5-12th. Following the training camp a team of 12 will be formed to participate in the FIBA Americas U18 Championship. The tournament takes place June 16-20th in Brazil.

HOPEFULLY THIS MEANS THE TEST SCORES ARE IN? But, I think ACT test scores take longer than a week to come back?

Been admitted into Iowa

DOMINIC ALVIS DIDN'T PARTICIPATE MUCH THIS SPRING BUT HE STILL HAS AN OPINION. Marc Morehouse has a piece on defensive linemen Dominic Alvis in today's Gazette. Alvis has been limited in activity this spring due to recovery from a torn ACL last fall. Alvis figures to be a key piece of Iowa's defensive line, possibly starting at defensive end.

FROM A CURRENT DEFENSIVE END TO A FORMER LEGEND AT THE POSITION. Aaron Kampman is in the news, well local news anyway. Kampman talked with Hawk Central's Randy Peterson about the NFL "bounty" issue. Kampman will receive the Robert D. Ray Pillar of Character Award Friday night in West Des Moines.

ESPN RELEASED THEIR TOP 150 BASKETBALL RECRUITS FOR 2013. There's not a single player from the state of Iowa on next year's first release of the Top 150. Hawkeye Insider's Rob Howe did speak with several of Iowa's talented basketball players following the Spring Fling. Howe has quick interviews with Iowa City West's Dondre Alexander, Jeremy Morgan and 2014 prospects Casey Schlatter and Seth Bonifas.

ESPN ALSO RELEASED THEIR 2013 FOOTBALL TOP 150. Here's a warning, there's a lot of block M's on the page. Iowa has struck out with a lot of their early offers to these "elite" prospects. There's still a few names on the board with Iowa offers. The interest might not be mutual but it's still early yet. Here's some names of ESPN Top 150 players that are still undecided and hold Iowa offers: Ty Isaac, Joey Bosa, Jaylon Smith, Ethan Pocic and Elijah Daniel.