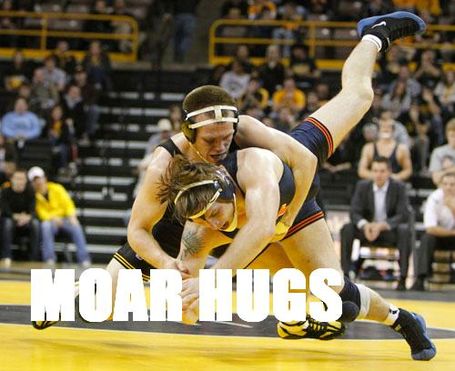 If Lofthouse has upped his game from a year ago, there's a clear path to very solid finishes at Big Tens and NCAAs for him. Heflin and (particularly) Blanton could prove to be real threats in the Big Ten, but for now Lofthouse's biggest impediment to a Big Ten title looks to be Ruth; he closed the gap on Ruth significantly from the time of their dual meet match to the Big Ten Tournament, so it's possible that with a bit more seasoning, Lofthouse could slip past him this year. Even if he can't do that, though, he should be able to duplicate his 3rd place finish at the Big Ten Tournament. He should also have little trouble improving upon his disappointing NCAA showing and, frankly, an All-American finish seems well within his reach this year. Let's say 2nd place in the Big Ten and 5th place in the NCAA.

The Verdict: As you probably noticed with yesterday's write-up on 165, we've now entered the challenging part of the Iowa line-up. And few Iowa wrestlers were more frustrating to watch in 2011-12 than Ethen Lofthouse. With Montell Marion's departure, Ethen seems destined to take over the role of "the most aggravating wrestler in the line-up." Every match is a toss-up between whether Good Ethen or Bad Ethen will show up. Lofthouse has been the full-time starter for two years and he's wrestled almost 70 matches and yet... I still don't know how good he is. I don't know if he does, either.

He has a 7-7 career record against the other seven guys who were All-Americans this year, so he's certainly capable of competing against guys on that level -- and beating them. And, in fairness, only 7 of his 19 career losses have been to guys who weren't All-Americans last year or this year. He doesn't regularly lose to guys he "shouldn't" lose to. This year only 3 of his 9 losses were to non-All Americans (and Iowa State's Chris Spangler probably would have been an All-American, if not for late season concussion issues). Unfortunately, while he's beating (most of) the guys he "should" beat, he isn't beating them decisively -- just 8 of his 20 wins last year included bonus points and only 10 of his 28 wins this year included bonus points. Too often, Lofthouse seems content to wrestle a close match decided by a late takedown or escape. Unlike some Iowa wrestlers, Lofthouse's problem isn't really a lack of firepower -- he's certainly shown himself capable of pouring on the points in matches (see: his first weekend performance at this year's National Duals for a recent example) and while quality of competition does play a factor there, not all of his decision wins were tight, back-and-forth duels with highly-rated competition.

Lofthouse is maddening because it's hard to identify why his results aren't better. We know why we didn't get good results at 149 or 197 last year: we didn't have very good options at those weights. But Lofthouse seems like he could be better than his final results said he is. The only two wrestlers at 174 who seemed to be definitively better than him were Ed Ruth (the NCAA champion) and Nick Amuchastegui (the NCAA runner-up, and even that is speculative, since Lofthouse never wrestled Amuchastegui). Was Chris Perry? Lofthouse lost to him 3-2 in OT in a dual and had several opportunities to score a decisive takedown. Was Jordan Blanton? Lofthouse beat him four times last year. Was Nick Heflin? Lofthouse lost to him at the NCAA Tournament, but does own a win over him from 2010-11. Was Logan Storley? Lofthouse had just a 1-3 record against him this year, but he should have been at least 2-2 (if not 3-1), if not for some late-match fuck-ups. Yet Lofthouse finished behind all of those guys.

Lofthouse's problems appear to be almost entirely mental; on a physical level he's not the freakish athlete that Ed Ruth is or the slick technician that Chris Perry is -- but he's more than capable of holding his own against anyone at 174 on that front. But Lofthouse's confidence and self-belief seem far more fragile. I'm not a fan of armchair psychology, but it's hard to find an alternative explanation for Lofthouse's often-tentative approach to matches and his hesitation during matches. Unfortunately, until he gets that sorted out, it's hard to see him reaching the heights we'd like him to reach.

Well, that's a lot of returning talent -- six of this year's eight All-Americans are slated to return next year, including Ed Ruth, the defending NCAA champion. Of course, it's also essentially a done deal that Ruth will be moving up to 184 (evidently the cut to 174 has not been pleasant) next year, which should make things quite a bit more interesting at this weight. Ruth was clearly a cut above all of the returning guys at this weight, so the intrigue would have been in seeing if anyone had made a leap forward in ability -- or seeing if Ruth just stumbled somewhere along the way. With Ruth out of the picture, though, there's no clear-cut favorite at 174. Perry, Blanton, Heflin, Storley, and Lofthouse all return and all should vie for spots on the podium next year. As the highest-returning finisher, Perry will probably be the early favorite at this weight but while his slick defense and funky offense make him a difficult match-up, he doesn't look nearly as challenging as Ruth did.

Ruth's absence will likely pave the way for Matt Brown, a former Iowa State transfer, to take his spot in the Penn State line-up. Brown had excellent results a year ago (including bumping up and grabbing a pair of wins over ranked opponents at 197), but it's unlikely that he's going to virtually lap the field the way Ruth did. All-American contender? Yes. Odds-on NCAA champion favorite? No. Beyond Brown, though, there aren't a lot of notable new faces (or returning faces who failed to achieve All-America status). Northwestern's Lee Munster (#8 seed) was the only wrestler seeded in the top-8 to fail to make the podium this year; 174 was a remarkably scratch weight at the NCAA Tournament. Oklahoma State is bringing in a pair of highly-ranked recruits, Jordan Rogers (#4, per InterMat) and Kyle Crutchmer (#17), although their path to the lineup at 174 will likely be blocked by Perry (Rogers is probably more likely to wrestle at 184 anyway). Mind you, as we discussed yesterday, there's also the possibility of one or more elite guys moving up from 165 -- perhaps David Taylor, maybe Andrew Howe, or even Tyler Caldwell. Any of them would likely be immediate contenders at this weight.

Iowa is also adding a pair of highly-touted freshmen around this weight, Sam Brooks (#16) and Alex Meyer (#52), although they might also go around 184/197. Meyer seems a bit more likely to serve as a long-term replacement for Lofthouse; if he redshirts next year, he could step into the starting lineup as a redshirt sophomore in 2014-15. Still, even if guys like Brooks and Meyer don't immediately push for starting spots, the hope is that their presence will help push the actual starters -- Lofthouse here, Gambrall at 184 -- to improve, making the team overall better. Hopefully that's exactly what plays out next year. I suppose we could also discuss the possibility of Mike Evans bumping up to 174 and replacing Lofthouse here, with Nick Moore replacing Evans at 165. If that happened, I don't think Lofthouse would simply move up to 184 -- he's not a big 174er (he's a bit short, in fact) -- he'd just be out of the lineup. I don't think that's terribly likely right now, but it's probably not worth ruling out entirely. Brands did not seem happy with the way Lofthouse was wrestling at the end of the season and if that problem persists, I could see him looking for alternatives. Long story short, there's a lot of uncertainty at this weight heading into next year. If none of the big names from 165 move up and if Lofthouse is able to develop a more effective attacking mindset, I think he will have every opportunity to vie for a Big Ten title and a top-4 finish at the NCAA Tournament. But those are two big ifs right now.