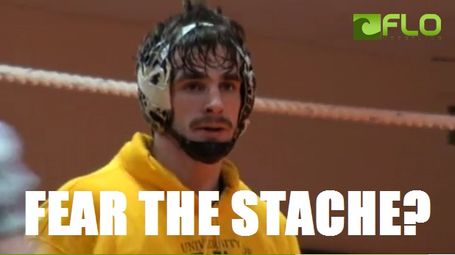 A year ago, Aaron Janssen emerged from a similarly close battle for the starting spot (with Jake Kerr) and put together a decent season: 28-9, 3rd place at the Big Ten Tournament, and R12 at the NCAA Tournament (just missing out on All-American status). Can either Moore or Evans trump those numbers this year? It's hard to say until we see them go against some legitimate competition (right now the best opponent either guy has faced is... each other), but right now I think it's possible. Taylor is the odds-on favorite to win the Big Ten, but the race for 2nd place is wide open. Yohn hasn't exactly looked like a world-beater over the last few seasons and Kokesh and Jordan have some question marks. Taylor is also the odds-on favorite to win the NCAA title and (as noted above) there are some returning All-Americans that will be favored to repeat that this year. Can Evans or Moore crack into that upper crust? I think so. So let's say 2nd or 3rd in the Big Ten and 6th-8th in the NCAA.

The Verdict: Well... I was half-right on that prediction -- Evans did finish 2nd at the Big Ten Tournament. Unfortunately, he wasn't anywhere near 6th-8th at the NCAA Tournament. His tournament was done by Friday morning, which is never a good thing for a wrestler at NCAAs. The cliche says that you shouldn't underestimate the power of first impressions, but in wrestling the reverse is often true: it's impossible to overlook the power of final impressions. And while Evans had a solid year on the whole, he did not leave a good taste in the mouths of Iowa fans with his 1-2 flameout at the NCAA Tournament.

Evans began the year by edging out fellow highly-rated 2010 recruit Nick Moore (Evans was ranked 5th, per InterMat, while Moore was 12th) for the starting spot at 165. The hope was that Evans' redshirt freshman season would follow roughly the same path as Derek St. John's redshirt freshman season a year ago: some ups and downs along the way, but ultimately ending with a strong finish that raised hopes for next year. A year ago, St. John muddled through the early going before hitting his stride in January and steadily improving; he ultimately finished as a B1G runner-up and 4th at NCAAs. Like DSJ, Evans was a highly regarded blue chip recruit. Like DSJ, Evans had the misfortune of matching up against Penn State's David Taylor, a phenom. But unlike DSJ, Evans crashed and burned at the finish line.

On one hand, it was unthinkable that Evans would have such a miserable showing at the NCAA Tournament: he was coming off a 2nd place finish at the Big Ten Tournament, he'd handled several ranked wrestlers over the course of the season (most notably Nebraska's Robert Kokesh), and he'd even wrestled Taylor fairly tough in two losing efforts. On the other hand, it was all too plausible that Evans could be an early exit because all season he had a glaring flaw: his offense from neutral. On the mat, Evans was (usually) an absolute terror; for an excellent case study look at Evans' Big Ten semifinal match with Kokesh, where he stretched and torqued Kokesh into a pretzel, racking up gobs of nearfall points on the way to a tech fall. Unfortunately, if Evans couldn't get a guy on the mat, he struggled mightily; he never developed a go-to shot on his feet and never looked comfortable attacking. That ultimately caught up to him at the NCAA Tournament, where his lack of offense doomed him.

It should also be noted that Evans' mat game is slightly overrated; for all his moments of mat wizardry, there were several times when he was unable to do much of anything to turn a guy, as well as more than a few times where he struggled to get escapes while being ridden himself. Suffice to say, he has a lot of things to work on in the offseason. And that's really the key point: how much better will Evans get? He still has an awful lot of potential and it would be beyond absurd to give up on him, but he needs to improve in several areas if he wants to take that step to the next level of competition.

There are two ways to look at the future of this weight class: what's Iowa going to do here and what's the rest of the nation going to be like. From an Iowa perspective, the question is whether or not Mike Evans is the man here again next year. In a way, Evans' situation here mirrors the situation Blake Rasing faced a year ago. After the 2011 Big Ten Tournament (where Rasing won a Big Ten title at HWT), it seemed slightly crazy to suggest that he might not be the starter in 2011-12. Three weeks later, after he struggled and crashed out early at the NCAA Tournament, that line of thought didn't seem nearly as crazy. Likewise, off a pretty solid regular season campaign and a good Big Ten Tournament ('til the loss to Taylor in the finals, at least), Evans seemed like a pretty sure bet to be the starter at 165 in 2012-13. But after his NCAAs performance, those odds took a hit.

I still think he's the favorite to start at 165 (he did beat Moore in their h2h encounters this year, 4-2 at wrestle-offs and 3-0 at the Lindenwood Open) and he was having a good season until the NCAAs... but the chance of Moore getting the job seems greater now than it did at any other point during the season. As for Moore, his season wound up being a mixed bag in terms of development: it was a good thing that he got experience in big matches and big events and against a higher caliber of opposition than he would have faced in open tournaments, but it was a bad thing that he wasn't able to wrestle at his more natural weight and that he lost so many of those matches against better competition. My guess is that the battle here comes down to the early season showings for both guys next year. Who has the better offense? Who has the more attacking mindset? Who looks better? My early pick is Evans, but time will tell.

Whoever wins the starting gig had better be ready to hit the ground running, though, because 165 could be a nightmarish weight next season. Only four 2012 All-Americans return, including just one of the top four (Taylor, the champion), but this weight is in line for a serious talent injection: former national champion Andrew Howe is expected to return after taking an Olympic redshirt in 2011-12, as is 2011 NCAA runner-up, Tyler Caldwell. Of course, there's also rampant speculation about which weight they'll return at (there's been some suggestion that Howe could bump up to 174) and who they'll be wrestling for (at one point, Howe was expected to return to Wisconsin and Caldwell was moving from Oklahoma to Nebraska -- which raised its own problem, since Nebraska already has a fine 165er in Kokesh -- but who knows where things stand now). Regardless, if Taylor, Howe, and Caldwell are all in the same weight class (and, potentially, all in the same conference) there should be some serious fireworks at 165 next year. To say nothing of the possibility of superstar Kyle Dake moving up from 157 to 165 in his quest for a fourth NCAA title.

The Big Ten should prove to be a particularly nasty meat grinder at 165 next year. Evans largely solidified himself as the #2 guy at 165 in the Big Ten last year, but maintaining that position will be extraordinarily hard. In addition to Taylor and (maybe) Howe and Caldwell, the Big Ten returns another All-American (Illinois' Conrad Polz) and (like Evans) a highly seeded wrestler who failed to reach the podium (Kokesh), plus Minnesota's Cody Yohn, who came on fairly strong at the end of the season. There's also a talent influx coming in the form of true freshmen -- Michigan's adding stud recruit Taylor Massa (#1, per InterMat), while Illinois is adding Zac Brunson (#18, per InterMat), though obviously either Brunson or Polz will have to move to a different weight for both guys to see the mat for Illinois next year.

It's going to take more than a wonderfully sleazy mustache for Evans to compete at the upper echelons of the Big Ten next year -- let's hope he's up to the task. 165 also represents the first weight we've looked at where Iowa has a legitimate chance to significantly better their NCAA performance from this year. At 125, 133, and 157 we're largely hoping to maintain this year's performances again next year (with slight improvement at 133 and 157, of course). At 141, we're mainly hoping not to backslide too far from this year's performance. And at 149, we're just hoping for something, anything. 165 is a weight where Iowa has serious talent, All-American talent. That talent grossly underperformed at this year's NCAA Tournament, but it's not outlandish to think that it could do much better next year. Which is good, because Iowa's national title hopes will likely be riding in part on a much stronger showing at this weight next year.