It's Not Plagiarism If You Link To It: So Iowa Had Their Spring Football Thing

Share All sharing options for: It's Not Plagiarism If You Link To It: So Iowa Had Their Spring Football Thing 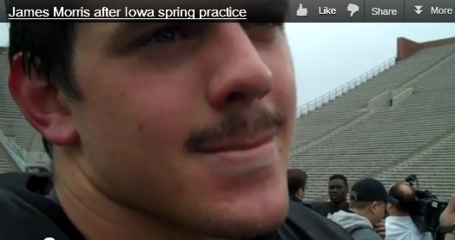 AND THERE IS PLENTY OF COVERAGE FROM THE LOCAL MEDIA. The defensive line is one area of concern. Marc Morehouse shot some video of both the offensive line and defensive line working through some two-on-two drills. Even if you watched the spring practice live these videos are a good chance to see some of Iowa's future linemen working to get better.

MOREHOUSE HAS STATS TOO. It wasn't a good day for the offense but it's only April. Damon Bullock's 84 yard touchdown propelled him to 124 yards on the day. Of course, tackling rules were feelingsball-y (but somebody didn't tell Nico Law). All three quarterbacks threw an INT. Vandenberg finished 12/30 according to the stats.

FERENTZ BELEIVES BOTH INCOMING FRESHMEN RUNNING BACKS COULD PLAY. Damon Bullock flashed some solid hands and break away speed but Iowa still needs all the offensive weapons they can get. Ferentz told the media,

"We'll give everyone an opportunity to help out the team - at some positions more than others - and running back is a spot where people will have that opportunity."

AUSTIN BLYTHE LOOKS TO BE THE STARTING RIGHT GUARD. But his future may be taking over for James Ferentz at center. According to Ferentz,

"We'd like to get our best five on the field, and we thought (Blythe) had the makings of a real good center. He spent a lot of time last year working as a No. 2 center, and there's no question that he can play well in there."

C.J. FIEDOROWICZ IS GETTING A LOT OF PUB THIS SPRING. He figures to be a huge part of the 2012 Iowa offense. C.J. has slowly developed into a threat after learning the nuances of the Iowa tight end his first two seasons. Ferentz said of CJF,

"This spring, he's clearly at a different level, which is good. That's what you hope to see in players. I think he's really ready to play football for us. He's got a lot of good gifts and skills."

IOWA'S LINEBACKING CORPS IS GROWING UP. James Morris, Christian Kirksey and Anthony Hitchens are veterans despite none being seniors. Ferentz talked highly of the trio and even made this comparison:

"I think it's interesting with both James and Christian. They're both veteran players, if you will. If you look at it, they've got two years left. A couple of years back Hodge and Greenway were in that spot after four years; that's where these guys are after three years. So they're younger in terms of their chronological age but experience-wise, they're about there."

TOLD Y'ALL MCCAFFERY GONNA GET PAID. Gary Barta is set to meet with Fran McCaffery and one of the discussion topics could be an contract extension. Pat Hary writes that Barta isn't in a hurry because there's still four years left on McCaffery's current contract.