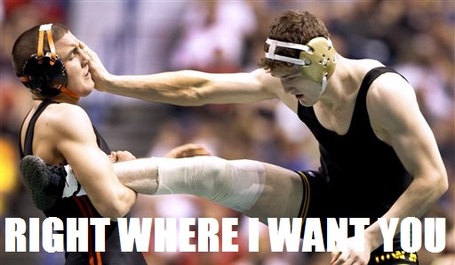 A year ago, I ignored the underwhelming recent returns at this weight and gave into the DSJ hype, pegging him for a top-8 finish at the NCAA Tournament and a top-3 finish at the Big Ten Tournament. He met -- and exceeded -- those fairly lofty expectations with a 4th place NCAA finish and a 2nd place Big Ten finish. So it will come as no surprise that based on his excellent results last year and the state of the rest of this weight, I'm aiming a little higher this year. With Taylor's bump up, St. John should be the clear favorite at this weight in the Big Ten, so anything less than a finals appearance would be a letdown. And barring the emergence of a dark horse challenger, St. John's biggest threat nationally appears to be the very formidable Dake. Matching his 4th place finish last year is the floor of my expectation -- and exceeding that to be a runner-up or even a national champion -- is a reasonable expectation for DSJ. He came on very strong at the end of last season and he's evidently looked solid in practices since then; if he has the weight cut under control and isn't dealing with the injury or stamina issues that plagued the first half of his season last year, he seems well-positioned to become one of the top wrestlers on the Iowa team.

The Verdict: St. John's final results lived up to my predictions almost perfectly... and yet also felt like a wonderful surprise. How's that work? Well, that's what a serious injury partway through the season can do to perceptions. The full extent of St. John's knee injury was never revealed, but it was clearly pretty bad: he missed over a month of action between December and January, then missed another month after a comeback against Ohio State in January resulted in a setback. That second return didn't look much better than the first return after DSJ was utterly swallowed up by Oregon State's R.J. Pena during the NWCA National Duals. I was ready to throw in the towel on DSJ's season at that point, believing that it was better to shut him down and let avoid further injury while recuperating for next season.

DSJ not only didn't hang up his headgear -- he positively thrived over the last month of the season. After the Pena loss, St. John lost exactly one more match the rest of the season: against Cornell's unstoppable Kyle Dake in the NCAA Finals. No one who saw DSJ struggle through those bad losses against Pena and Ohio State's Josh Demas would have thought DSJ would be standing atop the podium at the Big Ten Tournament or standing one step down from the top at the NCAA Tournament. DSJ's wins during that stretch weren't always pretty, but it was impossible not to watch him and be hugely impressed. He was clearly wrestling on just one good leg, which certainly limited his explosiveness, but he never stopped battling. Nor did he stop battling during several matches where he found himself trailing or when he found himself going to a do-or-die sudden victory period. St. John's wins over Nebraska's James Green, Penn State's Dylan Alton (twice), and Jason Welch (also twice) were some of the most thrilling matches of the last few weeks of the season -- and DSJ came out on top in all of 'em. Well done, DSJ.

Of course, that lengthy injury-related absence meant DSJ only wrestled about half the season for Iowa -- and precious little of the dual meet season. Fellow Iowa City West alum Nick Moore filled in for DSJ while he was out and the results were... mixed, to be charitable. He went 9-6 at 157 in DSJ's stead, and just 3-4 in dual meets. To be fair, it was hardly an ideal situation for Moore: he had to wrestle several tough 157ers (four of his six losses were against guys who went on to be All-Americans at 157) and he had to do so after making an unexpected midseason cut to 157; he'd spend the first part of the season in a tooth-and-nail battle with Mike Evans for the starting spot at 165. So it's unfair to be too harsh on his performance.

But... it was frustrating to watch him out there, especially since he kept making the same mistakes in several matches. He had a bad tendency to look flat-footed and give up easy takedowns (especially early in matches), which left him scrambling to dig himself out of a hole in most of his matches. He also looked hesitant to unleash his offense at times. Moore's HS accomplishments and recruiting hype (4-time IA state champion, #12 in InterMat's 2010 rankings) have created high expectations for him, which isn't terribly fair. Certainly, an inconsistent stretch as a RS freshman is no reason to give up on him as an option down the road. He did some good things (five of his nine wins were bonus point wins and he had competitive losses against Alton and Green) along with the bad, and generally showed promise. That'll do for now.

Yep -- yet another weight that returns a ton of All-Americans. (If you're sensing a trend here, you're right; youth was served at the NCAA Tournament this season.) Seven of eight All-Americans are projected to return -- everyone but American's Ganbayar Sanjaa (6th) -- including three-time NCAA champion (at three different weights) Kyle Dake, and the B1G power quartet of DSJ, Alton, Welch, and Green.

On the bright side, though, the competition drops off pretty severely after those returning All-Americans. The biggest returning name among the non-All Americans is BHGP's favorite non-Iowa wrestler, Virginia Tech's Jesse Dong, who redshirted this season after suffering an injury early in the year. He's joined by a pair of other top-12 seeded wrestlers who failed to reach the podium: #8 Frank Hickman (Bloomsburg) and #12 Steven Monk (North Dakota State). Among incoming freshmen, Iowa State super-recruit Destin McCauley could easily slot in here if he doesn't go at 149.

Nationally, the biggest question mark at this weight is Kyle Dake. Will he bump up to 165 to try for an unprecedented fourth national title at a fourth different weight? Or will he stay put at 157 and try to dominate all comers again next year? His decision will have a big impact on DSJ's ability to claim a national title next year. If Dake bumps up, DSJ is probably established as the early favorite to win it all at 157. If Dake stays, DSJ's almost certainly going to need to find a way to solve the riddle of beating him if he wants to claim a title.

Regardless, St. John should find himself solidly established as a very solid favorite in the Big Ten next year: he's beaten all the other top contenders, although the results haven't always been decisive. On the other hand, the fact that he beat them when he was so clearly not at 100% makes his wins over them a bit more impressive. St. John's toughest B1G challenger looks to be Penn State's Dylan Alton, who lost a pair of 3-1 SV matches to DSJ at the Big Ten and NCAA Torunaments. Still, on paper, the Big Ten looks like it's DSJ's to lose and the NCAA sets up for a rematch with Dake. I could certainly live with those results.