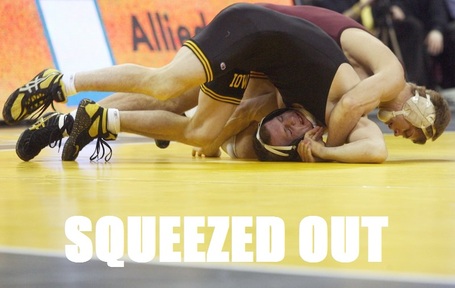 Um... pass? Seriously, until we know who's going to man this spot (and see them against legit competition), it's damn near impossible to provide any sort of informed prediction here. Based on what we've seen out of 149 thus far, I think we'd probably be doing really well to get a .500 record in duals and an NCAA qualifier out of this weight. Expecting a high finish at Big Tens or even sniffing All-America status at NCAAs is a little too pie-in-the-sky for now.

The Verdict: Oof. I punted on a prediction for 149 before the season because it was impossible to know what we might get out of this weight when it was so hard to know which of 4-5 guys might actually man this spot in 2011-12. But even in my most pessimistic predictions, I didn't think we'd get results as miserable as those we saw a year ago -- and even that might be charitable. Bad weights happen -- in today's age of scholarship restrictions, it's going to be very hard to fill out a team with ten top-flight wrestlers -- but for the same weight to be bad two years in a row... well, that's a bit harder to stomach.

A revolving door of wrestlers manned this weight over the course of this season -- Dylan Carew (very briefly, before yet another injury killed yet another season for him), Jake Ballweg (who was unimpressive in limited action), Josh Dziewa (wrestling up a weight for one match), even true freshman Brody Grothus (albeit only at unattached tournaments, so that he could preserve his redshirt this season). Michael Kelly ultimately won the spot after a solid showing at the Midlands in late December. Unfortunately, that tournament might have been the apex of his season. He won five matches there (six if you include a forfeit) -- and four matches total the rest of the season. We put a lot of faith in his near-loss to former Purdue star Jake Patacsil there and his overall efforts (he finished 5th), but that may have been fool's gold. Patacsil spends most of his time now wrestling freestyle, not folkstyle, and Kelly's wins at Midlands didn't exactly come over a who's who of 149ers.

Kelly perfected the art of the close loss to such an extent that even Kirk Ferentz thinks he may have gone overboard there. Kelly was almost never blown out (3 bonus point losses; he lost just 11-5 against Molinaro, and that was only due to a late flurry from Frankie), but even if a decision loss doesn't hurt quite as much as a major decision or tech fall loss, it still hurts. The idea is (INCREDIBLY OBVIOUS STATEMENT ALERT) to get wins, even ugly ones. But Kelly just could not get that over that hump. The Big Ten qualified a stunning nine wrestlers for the NCAA Tournament -- and yet Kelly still couldn't wiggle his way into the mix there, which meant a second-straight year with no Iowa representative at 149 in the NCAA Tournament. To call the drop-off at this weight "precipitous" is probably under-selling it, frankly; before last year, Iowa had an NCAA finalist at 149 for three years running (Brent Metcalf). You expect some regression after standout results like that, but to go from that all the way to not even being able to field a truly competitive option? Maddening.

Kelly had expected to wrestle at 157 this year, so I commend him for his sacrifice in cutting to 149 to try and improve the overall quality of the team, but ultimately the results just weren't there. The hope is that Kelly could do better at this weight next year if he sticks with it, that not having to contend with losing 8-10 pounds in the middle of the season could make him a more explosive and dangerous wrestler. And that could happen. But it's difficult to have much confidence in that hope coming true when Kelly's spent so many matches looking so un-aggressive and when his offense looked so unimpressive. He's good at throws (just ask this guy!), but it's tough to rely on those moves as the backbone of our offense. He needs to be able to get to an opponent's legs and get a takedown that way; if he can't do that, he better figure out a way to Hulk out at 149 and become "the strongest one there is."

(click to embiggen)
Here's the good news: two-time NCAA finalist and defending national champion Frank Molinaro is gone; we'll never have to worry about the Italian Stallion boring us to death again. Here's the bad news: almost everyone else should be back in 2012-13. The only All-Americans not returning next year are Frank the Tank and 5th place finisher Tyler Nauman of Pitt. Everyone else should be back. In addition, five of the top 12 seeds at the NCAA Tournament didn't attain All-America status, but they are slated to return next season (including the wonderfully named Cole VonOhlen of Air Force). There's also Mario Mason, a perpetual top- ten wrestler from Rutgers who has had the misfortune of getting injured before the last two NCAA Tournaments; he would have been a strong bet to be an All-American if healthy. There are also two notable names returning from redshirts, 2011 All-American Jason Chamberlain (Boise State) and Andrew Alton (Penn State). And's there a dynamite incoming freshmen, Iowa State's Destin McCauley, who was one of the top 2-3 recruits in 2011 (he spent 2011-12 at the Olympic Training Center).

Here's the good news for Iowa: almost any success would constitute a step up from what we've seen the past two years. Here's the bad news for Iowa: there's no guarantee that any of the available options will be more successful than what we've seen the past two years. At this point, the legend of Dylan Carew far exceeds his actual college accomplishments (honest-to-God college record: 3-0). Jake Ballweg has the best profile from a recruiting hype standpoint (#27 in InterMat's 2010 rankings) and has looked good in unattached competition (19-2 last year, 16-4 this year), but he floundered when handed the reins (very briefly) last year. Grothus generated some early hype last season, but he was regularly beaten in h2h competition with several of his teammates and he's likely nowhere near being a big point-scorer at 149. That essentially leaves a handful of guys wrestling outside their natural weights -- Mark Ballweg and Josh Dziewa might be able to move up from 141 and Mike Kelly might be able to move down from 157 again -- but we've seen that movie already and it didn't win any awards. Nor are there any stud incoming freshmen at 149 -- Nate Skonieczny could eventually be big enough to fill that spot, but almost certainly not as a true freshman.

No, if Iowa is to see success at 149 in 2012-13, it will come from Dylan Carew being visited by the Good Health Fairy (and the Confidence Fairy, if other reports are to be believed) and finally getting a chance to live up to his considerable talent -- or it will come from one of the "been there, done that" options showing actual marked improvement. The latter seems more likely than the former -- even if Carew is healthy, let's not forget that he's had precious little mat time over the past two years, which is hardly a recipe for excellence. It's not outrageous to think that Ballweg could genuinely improve enough to be a solid option or that Kelly might develop some actual point-scoring offense or that Grothus could take a few steps forward. Even with improvement, it's hard to see any of Iowa's options raising too much of a ruckus at Big Tens or NCAAs. The Big Ten returns five quite good wrestlers at 149 (six, if Andrew Alton handles the move up to 149 as well as expected) and the NCAA has a host of good wrestlers coming back (just scroll up and look at that table again). But Iowa got ZERO points out of this weight in 2011-12 -- literally ANY points would be an improvement. Can we find a wrestler who can win a match or two at Big Tens and at NCAAs? I sure hope so.