Share All sharing options for: Black and Gold Clad Men: The Editorial 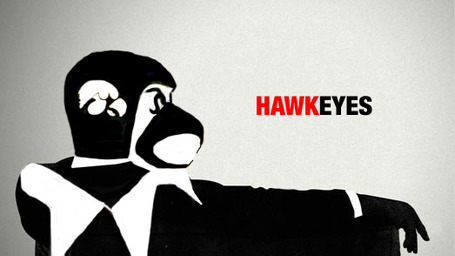 A lone figure walks to his office, passing co-workers that cannot help but stare at his absolute audacity. 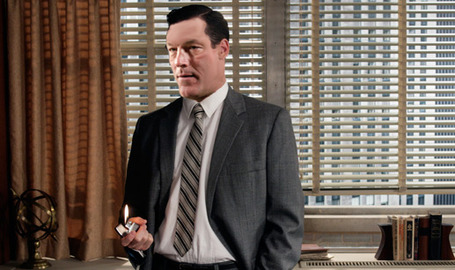 The door flies open and the four men file in.

(Slamming newspaper on the desk) What the hell is this?

Something I've been waiting to say for a long time.

(Picks up newspaper and reads) "Why I'm Quitting On Running the Ball - recently my football team ended a long relationship with the running back position, and I'm relieved. For over 100 years, Iowa football has devoted itself to using a position for which good work is irrelevant because teams can't stop themselves from using it. A position that never improves, constantly gets injured and makes people unhappy. But there was money in it. A lot of money. In fact, our entire university depended on it. We knew it wasn't good for us, but we couldn't stop. So, as of today, the Iowa football program will no longer recruit running backs. We know it's going to be hard. If you're interested in running backs, here's a list of schools that do it well: Wisconsin, Nebraska, Georgia Tech, Virginia Tech and Texas A&M. As for us, we welcome all other skill positions because we're certain that our best work is still ahead of us. Sincerely, Kirk Ferentz, Iowa football.

This is suicide. I mean I coach wide receivers and I'm all about throwing the ball, but this is a death wish. We need running backs. You're going to get our receivers and this program killed. Is that what you were thinking?

(Speaking in British accent) I've done my darndest to save this company and here you go and pull the plug. And in spring ball!

Oh for Godsakes you should know by now. I'm from that foreign land known as Texas.

Do you realize what this means for our other positions? Now how are they going to be sure that you are not going drop them at a moment's notice and put another ad that blasts them. You're crazy.

Gentlemen, this is not a death wish. This isn't suicide. It's an ad. We make them all the time. And I didn't even have to be wined and dined.

Keep joking. You're cynical and craven. Running backs put a roof over your head and fed your children.

And then, it killed our program.

I cannot believe I'm hearing this. Running backs have been the cornerstone of the team. Ronnie Harmon, Nick Bell, Sedrick Shaw. These were all crown jewels on successful teams. I cannot be a part of a program that does not share that vision. Gentlemen, I bid you adieu.

Mr. Fry leaves in a huff

You've put me in a lose-lose position here, Kirk. Everything I've done here has been in the full understanding that we would have a running back. It'll be tough to sustain the program without one.

I just don't know what the big deal is. We should be used to not having a running back by now. Everything is going to be fi---

Sir, I hate to interrupt but you have a call.

We're kind of in the middle of something.

Ferentz reaches for the phone

Hello, this is Kirk Ferentz.

I read what you had to say and I was impressed, it's that kind of open minded approach that'll do wonders in our country.

It's your old buddy Beliema. Thanks for the plug in today's newspaper. I'm used to poaching quarterbacks, but an extra running back or two will not be a problem behind our behemoth line. Thanks again Kirk. Have a good fall.

I think this meeting is over. We've got work to do.

Well, I gotta go learn a bunch of people's names before I fire them.

Meanwhile in the break room

What do you think they're talking about in their meeting.

Probably how many of us they are going to release. And just as television was about to take off.

What are you talking about? Television has been around for almost 70 years.

Not 3D television. And now all of it is down the drain.

I don't think you should worry. You have an in with the boss, plus didn't they just hire your brother.

Yeah, but the ones hired first are always the first to go.

What about you Vandenberg? We never heard your thoughts on what you think of Kirk's letter.

Well everybody thinks that it's the death knell of the program, but I think it's the exact opposite. I think it will open some new opportunities. And who doesn't like an exciting passing offense. I think the rumors of our demise are a little exaggerated.

Mr. Fry walks by holding some of his belongings in a box.

I just wanted to say that it was a pleasure to work with all of you. An absolute pleasure.