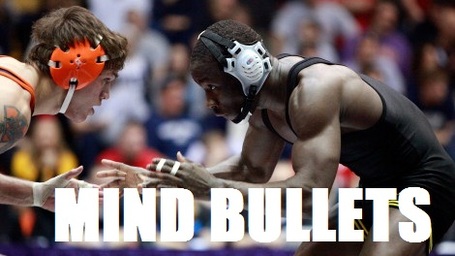 Aside from McDonough, Marion is probably Iowa's most realistic option at having an NCAA finalist. He made it that far two years ago and he's a stronger, better wrestler now than he was then. There's no Iowa-Michigan dual this year, so unless Marion and Russell tangle at a tournament (Midlands?) or National Duals, they won't have a chance to tangle until the Big Ten Tournament. The $1,000,000 question is: can Marion beat Russell? He's been absurdly, painfully close in the past and he's a senior, so this is his last opportunity to get to the top of the podium. My heart says Marion is finally able to topple Russell, either at the Big Ten Tournament or at the NCAA Tournament, but my head isn't so sure -- Russell's uncanny balance and flawless defense makes him awfully hard to pick against. Either way, I like Marion's odds of at least making the finals and racking up a lot of points for Iowa.

The Verdict: The answer to that $1M question? Unfortunately, it was "no." Russell bested Marion in both the Big Ten and NCAA Tournament finals in 2012, denying Montell Marion his long-sought asterisk (the mark that denotes your status as a champion at Iowa). I wrote quite a bit about Montell just a few weeks ago, so I'm loathe to rehash it again here: suffice to say, Marion's season (and career) was ultimately a bit better than he'll get credit for, but it was also undeniably a bit disappointing, given Marion's prodigious natural talent. Personally, I think his pair of losses to Russell is less disappointing than his lack of bonus point wins. Just 13 of his 31 total wins in 2012 included bonus points (and only two of those 13 wins were more than major decisions).

To be sure, Marion wrestled arguably the toughest schedule of any 141er (he had eight matches against fellow All-Americans this year and all four of his losses came against those guys) and he displayed impressive perseverance in his finals runs in the Big Ten and NCAA Tournaments (in both tournaments, he reversed losses from earlier in the season, most dramatically in his NCAA semifinal match with Kendric Maple). Still, there's always going to be a whiff of "what could have been..." from Marion's career. His lack of bonus points was doubly troubling because of his status as a senior team leader; on a team that started six freshmen or sophomores, he needed to be one of the guys setting the tone for the rest of the team and wrestling aggressively and looking to dominate. Too often, that wasn't the Marion we saw on the mat. The accomplishments are still quite impressive -- again, Big Ten runner-up and NCAA runner-up are nothing to sniff at, particularly when the guy who topped him for both titles was Michigan's excellent Kellen Russell -- but the way they were achieved was often more workmanlike than wizardly.

It's a damn shame Marion doesn't have one more year of eligibility left, because 2013 would have presented an excellent opportunity for him to get that long-awaited asterisk. Just four All-Americans return from 2012, including none of the top three finishers (Russell, Marion, Cal Poly's Boris Novachkov). There's also a noticeable lack of elite talent returning from redshirts -- there's really none to speak of. There isn't even much in the way of highly ranked guys who failed to attain All-America status in 2012 -- the best guy who didn't finish on the podium was probably Minnesota's Nick Dardanes... and he was the #9 seed at the NCAA Tournament, so he wasn't really predicted to be an All-American, either. Hell, there are really only two stud freshmen of note entering the ranks at 141 this year -- #2 Jason Tsirtsis (Northwestern) and #8 Nate Skonieczny (Iowa). Tsirtsis is the brother of former Iowa wrestler, Alex Tsirtsis (who also wrestled at 141) and if he's as good as the hype, he could absolutely make some noise in this diminished weight class. As noted yesterday, there's also the possibility of some 133 guys moving up to 141 next year; right now, Kendric Maple and Mike Mangrum look like the top dogs at this weight, but if Scotti Sentes or (especially) Jordan Oliver bumped up to 141, they could immediately change the complexion of this weight.

But whither Skonieczny? Tom Brands has never started a true freshman during his Iowa tenure and he believes strongly in the potential benefit of a redshirt season for freshmen. But what if Skon is clearly better than the other guys in the room at 141? What if he's Iowa's version of a freshman like Nico Megaludis, a true freshman that can more than hold his own with the best at this weight class? If that's the case, Brands might have no choice but to pull that redshirt, especially with Iowa likely to need as many points as possible if they want to have a realistic shot at toppling Penn State. But that might be putting the cart before the horse: to win the job, Skonieczny will have to be markedly better than the other options Iowa has at 141 and not only is that impossible to know now -- such a presumption is awfully unfair to the guys who are at 141 now.

Mark Ballweg struggled mightily up a weight at 149 a year ago and didn't wow in several of his tournament appearances this year, but Ballweg did look very solid while filling in for the suspended Marion in the first part of the 2010-11 season. He picked up 15 wins and displayed an impressive knack for getting pins (a skill which is sorely needed on this current Iowa team), so if he can regain that form, he could give Iowa a solid point-scorer in 2012-13. If Ballweg is the current favorite (based largely on his past experience), then Dziewa is the intriguing second option at this weight. He was a key member of Iowa's lauded 2010 recruiting class (ranked #16 overall by InterMat), lost his entire 2010-11 redshirt season to an injury, and wrestled sparingly in 2011-12 (he went 12-3). He lacks the experience of Ballweg, but he may have more overall talent -- it's just a matter of harnessing that talent (and becoming more defensively sound) and displaying it consistently.

Gun to my head, Ballweg is the starter in 2012-13, but that's very much subject to change -- I fully expect Ballweg, Dziewa, and Skonieczny to battle for this spot over the first few weeks of the season. Nothing is likely to be settled until Midlands. No matter who emerges as the man at this weight, though, it's unlikely that he'll be able to duplicate Marion's tournament production: a top-four finish in the Big Ten and a low All-America finish seem plausible, but that's a definite step down from Marion's runner-up finishes in both events.