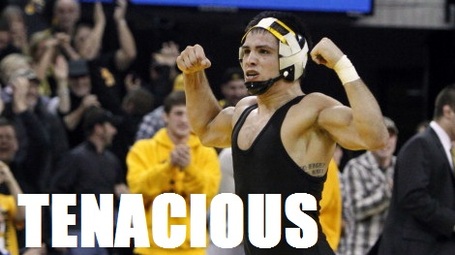 This is a weight class where it should be far easier for Iowa to make hay in the Big Ten ranks than in the national scene. Oliver is a devilish match-up for almost anyone, but even moreso for an undersized guy like Ramos, considering that Oliver has been dogged by talk that he could easily move up to 141 and, as we saw at the NCAA Tournament, Sentes is a pretty rotten match-up for Tony as well. On the other hand, with Long and Graff gone, the Big Ten looks considerably more wide open, which should benefit Tony. On the other hand, there's also no shortage of potential threats in the Big Ten at 133: not including Ramos, four of InterMat's preseason top ten hail from the Big Ten (Quiroga, Stieber, Minnesota's David Thorn, and Illinois' B.J. Futrell. Ramos split a pair of matches with Futrell last year, losing to him at Midlands but beating him in the third-place match at the Big Ten Tournament. He swept Thorn last year, although all of the matches were close (7-3, 4-3, 7-5 OT). So what's the expectation? All-American seems reasonable, since Ramos was very close last year and should be better this year. It's tough to see him getting past either Oliver or Sentes at this point, but any finish between 3rd and 8th seems plausible. In terms of the Big Ten, becoming a Big Ten finalist seems eminently possible this year -- and winning it all certainly doesn't seem beyond him at all, either.

The Verdict: As it happened, Thorn and Sentes were no problem at all for Ramos -- Thorn lost his starting job to Chris Dardanes early in the season and Sentes spent this year redshirting -- and Ramos actually beat Oliver in their one and only encounter this season. If you'd told me all that before the season, I would have assumed Tony would have ended the season with some serious hardware. Alas, that preview neglected to mention the man who emerged as Ramos' biggest obstacle in 2012: Ohio State's Logan Stieber, who beat Ramos in three matches and eked out a controversial win over Oliver in the nCAA finals. Stieber was often infuriating to watch, but he was very, very good at a few things -- namely, riding guys like crazy from on top (he used and abused Tony in that position in their first match) and displaying some very tough defense from neutral. He's also extraordinarily strong.

The upside is that while Ramos did go 0-3 against Stieber, there was a definite sense of progress in their matches. In the first match, Stieber nearly majored him (he won 7-0) and Tony never really came close to scoring on him. In the second match, Ramos was able to score a takedown, but a reversal proved very costly (as did his continued struggles on bottom against Stieber). But the third match looked far more even and Tony's looked like he had a legitimate shot at beating him -- he was able to get a reversal of his own after a Stieber takedown and he was pretty close to a winning takedown in the waning seconds of the match. Obviously, Tony will need to keep improving -- Stieber isn't likely to get worse -- but the progress of their matches gave me hope that Stieber is a riddle that Ramos might actually solve in the future. Which is good, because odds are we'll see them tangle quite a few times in upcoming seasons -- Ramos will be a junior next year and Stieber will be a sophomore and I'm not sure he'll move weights since Ohio State has well regarded guys at the two weights above him (including his brother, Hunter, at 141).

The Stieber series (and accompanying lack of first-place hardware) aside, it's hard not to look at Tony Ramos' season overall as a success. He improved his finishes at the Big Ten Tournament (from 3rd to 2nd) and NCAA Tournament (from crashing out in the Round of 12 to 3rd place and an All-America placement), became one of Iowa's most exciting (and consistent) wrestlers, and improved his bonus point production. A year ago, he had nine bonus point wins out of his 22 wins (1 pin, 3 tech falls, 5 major decisions). This year he had 19 bonus point wins in his 33 wins (8 pins, 7 tech falls, 4 major decisions). There's no question that Ramos got better and that progress was a delight to watch. There's still room for him to improve, of course -- he still struggles at times on the mat (both riding guys and being ridden), most notably -- but so far, so good for Ramos.

It's a good thing Ramos improved in 2012 and we certainly need to hope he can keep it up in 2013 because this could be one of the nastiest weight classes in the nation next year. Seven of eight All-Americans from 2012 return -- everyone but 7th-place finisher Zac Stevens of Michigan. That includes both this year's champion (Stieber) and last year's champion (Oliver), two newcomers who took the scene by storm in 2012 (Minnesota's Chris Dardanes and Virginia Tech's Devin Carter), and poor B.J. Futrell, who seems destined to inhabit a gatekeeper role at 133: good enough to beat most guys at 133, but not good enough to beat the cream of the crop (Oliver, Stieber, Ramos).

The return of those guys alone would make 133 a fearsome weight next year, but you've also got two 2011 All-Americans returning from redshirts in 2012: Wisconsin's Tyler Graff and Central Michigan's Scotti Sentes. There's also a trio of guys who were seeded around All-American placement in 2012 but failed to achieve that distinction -- UNI's Joe Colon, Edinboro's AJ Schopp, and Purdue's Cashe Quiroga. There's also a highly regarded crop of true freshmen who could be entering this weight next year, including five of InterMat's top 14 recruits -- #5 Alex Cisneros (Cornell), #6 John Meeks (Iowa State), #9 Mark Grey (Cornell), #10 Thomas Gilman (Iowa), and #14 Zane Richards (Illinois). Some of those guys will probably be blocked by existing upperclassmen (Gilman and Richards, say) and the returning guys at this weight will make it very difficult for a true freshmen to make too much noise, but after the success of freshmen this year, I'd be remiss if I didn't mention the possibility of one of those guys blowing up in 2013.

Of course, there's one thing that could throw a monkeywrench in the staggering depth of this weight class: weight changes. Oliver has been rumored to be moving up to 141 for a few years now -- he's a big 133er and the cut is allegedly not easy. Sentes has a big enough frame that he could probably handle a move up to 141 fairly easily. Graff could possibly move to 141 to make room for incoming freshmen Jesse Thielke at 133. And that's without even discussing the fact that guys could move to 141 just because it looks like a considerably easier weight class next year. There's a lot of time left 'til next season and a lot of ways for things to shake out, but barring a slew of surprises, 133 should be loaded with talent next year. Hopefully Tony Ramos eats his Wheaties.