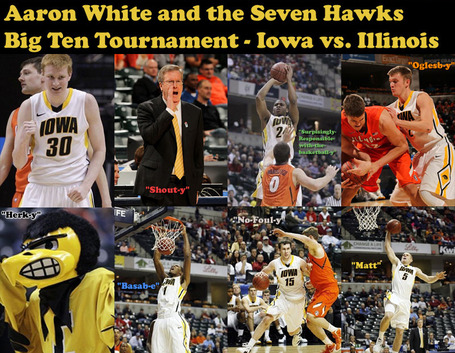 The pedestrian 64-61 score belied what was, in fact, a very weird and wonderful game. To get an idea of just how unusual this game was, look at the following numbers:

Michigan State is up next, and really who knows what will happen. One positive for Iowa is that one of the Spartans' better scorers and rebounders, Branden Dawson, is out of the lineup with an ACL injury. Iowa will need a repeat of its unusually great rebounding performance against the wide bodies of Draymond Green and Derrick Nix, and that's where the fatigue from the Illinois game may come back to bite them.
Post-script on Weber
This may mark the end for Bruce Weber, which is kind of a shame. He always seemed like a good coach and a decent guy to me, but there's a sort of Tom Davis-like scenario in action now where Weber's previous success is almost being held against him as a standard he can't meet. For Illinois fans who are out for blood today, consider the following numbers: 2, 11, 33, 40, 24, 53, 18, 69. Those are Illinois' Ken Pomeroy rankings from 2005 to 2012. So Illinois was a top-40 team six out of the last eight years, and this year is their first below fifty. The fans know their team better than I do, so they'll have to judge if this year is an anomaly or something more serious. Also consider the number of seniors who played significant minutes for this Illinois team (one) and compare it to the number of freshmen and sophomores who did the same (seven). The popular take on their season seems to be that they were a massively talented team that just wasn't coached well enough, but the impression I got was that they were a massively young team, and one that was pretty thin on talent to boot after Leonard, Paul and Richardson. Maybe that's Weber's fault, but maybe it was just one bad year. Take it from an Iowa fan who has learned better: change for its own sake is not always a good thing. Wait, why am I trying to help Illinois? Fire him! Fire him now!