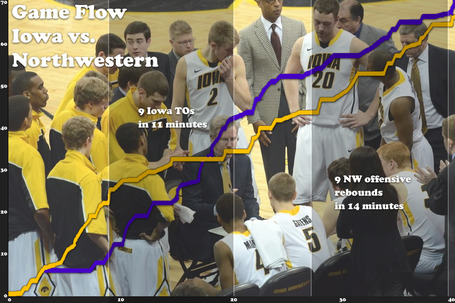 If you would have said before the game that Iowa would shoot 55% from the field, would hold Northwestern to 42.1% and just five three-pointers, and that John Shurna would score in single-digits, I would have said Iowa would win in a walk. In fact, I would have said it would have been almost a mathematical certainty that Iowa would win, unless Northwestern shot some crazy number of free throws. But when you look at the box score and see that Northwestern took 17 (!) more field goal attempts than Iowa, then you glance at the turnover and offensive rebounding totals, you begin to see how the impossible happened. Despite an impressive defensive effort, Iowa lost for three simple reasons: turnovers, offensive rebounds, and just a smidge of help from the referees. Let's look at the reasons, ranked by descending importance.

This is almost the entire story of the game. Iowa was in a very favorable position midway through the first half, up 28-13 with 9:38 left. Shortly thereafter John Shurna was called for an offensive foul (his second) and Bill Carmody was forced to put his star on the bench. This should have been the stretch where Iowa took their already commanding lead and made it insurmountable. Instead, the Hawks commenced on a run of indecisive play and baffling turnovers.

It was no accident that Iowa's struggles coincided almost exactly with Northwestern's more aggressive use of their 1-3-1 zone. The absence of Shurna may have even improved the Wildcat defense, because it allowed Carmody to use his three athletic wings JerShon Cobb, Drew Crawford and Reggie Hearn at the top of the zone and the stouter post defender and rebounder Davide Curletti at the back. Northwestern did a good job of anticipating Iowa's passes and trapping the ball when it got into the post or on the wing. Partially as a result, and partially because Iowa's players seemingly lost their minds, the Hawks committed an astonishing variety of turnovers:

It was one of the most painful sequences of play Iowa has had all year. The really frustrating part is that most of the turnovers were not directly forced. Northwestern's zone put just enough confusion in the minds of Iowa's players that the Hawks voluntarily gave the Wildcats the ball time after time after time. The Iowa players looked like they had no plan of attack and no confidence. Part of the blame has to go to the players, especially Marble, who made three lazy passes during the stretch, but some has to go to the coaches, too. The one thing Iowa needed during this sequence was a steadying hand, say a four-year veteran with the experience, strength and height to handle an aggressive trapping defense; for some reason, however, Matt Gatens was stashed in the corner of the zone during this run and Marble, Oglesby and Cartwright were left to mind the store.

The turnovers continued to kill Iowa in the second half, and Cartwright has to take a hefty share of the blame here. He committed several turnovers on very low-probability lobs to White, and of course made the crucial turnover in the final minute when Iowa had a chance to tie the game or take the lead. Cartwright did a lot to aid the Iowa comeback, it must be said, making tough jump shots and handing out several sweet assists, but the turnovers were just brutal. Iowa finished with 18 turnovers in a fairly slow 63 possession game, reprising almost exactly their dreadful turnover rate from the previous Northwestern game.
2) Offensive rebounds
As I noted in my pre-game guide to the game, Northwestern is a truly awful rebounding team, ranking in the basement nationally in opponent's offensive and defensive rebounding percentage. Yet they managed to dominate the boards against Iowa, grabbing 13 offensive rebounds to Iowa's 5 and extending multiple possessions in the second half. Over the last 14 minutes, the Wildcats grabbed nine offensive rebounds, leading directly to 14 points. Take those "extra" possessions off the board and, well, maybe Iowa wouldn't have needed that Oglesby three to go down to win the game.
So why was Iowa so pathetic on the boards? Part of it was the highly inconsistent way that the refs were calling contact under the boards, but a lot of its was due to Iowa's poor box-outs on Northwestern's guards. Cartwright and Marble, in particular, both seemed to forget that they had any obligation to get a body on a man when the ball went up, allowing Northwestern's guards (especially Drew Crawford) to sprint all the way to the rim without obstruction. Another factor was simple dumb luck: Northwestern took a lot of long shots and many of them just happened to bounce right to a Wildcat player.
3) The refs
Not all of the venom the crowd hurled at the officials in the final minutes was justified -- the ball did hit the heel of the rim at the end of the game, Cartwright did push that guy out of bounds, and Marble probably did get a hand on that Shurna shot -- but there was still plenty for Iowa fans to complain about. There was the time Shurna tripped on his own feet and it was called as a foul on McCabe, there was the tie-up where no Northwestern player had a hand on the ball, and of course Sobolewski's dramatic flop* on McCabe earlier in the game. 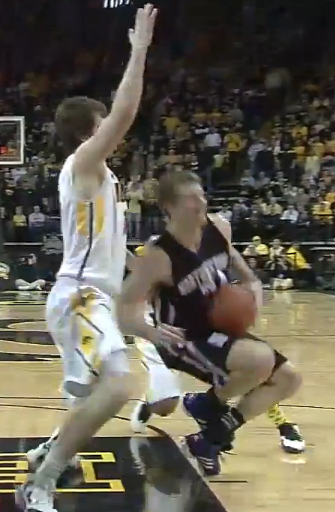 This is an obvious foul.

*Another amusing Sobolewski moment: one time the whistle blew just as Aaron White was going to take the ball up for a lay-up while Sobolewski was under the basket; White halted his move abruptly as the whistle blew, never making contact, but Sobolewski's instincts must have been too strong to resist and he flopped anyway. It was actually kind of fascinating to see the flopping mechanism in its pure, isolated form. By the way, if you were wondering who would take over as most-hated Northwestern player, I think this dude is a good choice. Possible nicknames: "SOB", "Soboflopski" and "the Polish Infantry." 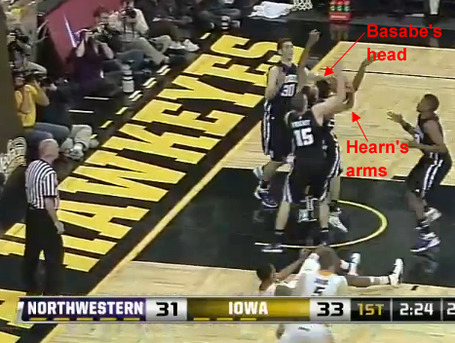 This is not a foul.

The really irritating thing, though, was the inconsistent way the refs called contact on rebounds. Northwestern played a very small lineup almost the entire game, and the smaller players seemed to get the benefit of the doubt every time there was a collision under the basket. When a Northwestern player went over an Iowa player's back or used an arm to push off, it was a no-call, but when a taller Iowa player did the same, it was a foul. The best refs establish a standard early of what is and what isn't a foul, call it consistently for both teams, then become invisible. It's not that good refs don't call fouls, it's that they demonstrate to everyone involved -- the fans, the players, the coaches -- what to expect and thus become a predictable and natural constraint in the game, almost like the height of the rim or the length of the court. The refs yesterday were not predictable, and stuck out like a sore thumb.

With all that said, it wasn't as if the refs forced Iowa's players to commit turnovers, not box out, and miss free throws. The Hawks did plenty on their own to bring Northwestern back in the game. They turned a 15-point lead into a seven-point deficit in 11 minutes, for crying out loud! They fouled a three-point shooter in the act of shooting -- TWICE! They threw the ball to no one in particular multiple times. In short, they put themselves in position where they were forced to depend on the good graces of Ed Hightower and Mike Kitts in the final minutes, and that's no place to be.
The real shame is that Iowa wasted an outstanding defensive performance. Northwestern is one of the better offensive teams in the country (#30 in offensive efficiency) and they dominated Iowa on that end the last time the two played, going for almost 1.4 points a possession and an effective field goal percentage of 72%; this time, Iowa held Northwestern to 1.1 points a possession and an eFG% of just 46.5%. The Hawks did an excellent job of rotating and denying the three-pointer, and Matt Gatens justly earned Fran McCaffery's designation of an "epic" defensive performance on John Shurna. Despite a four-inch height differential, Gatens did an excellent job of shading Shurna on the perimeter and then bodying him up when he got the ball in the post. The whole team played well on defense (at least until the shot went up), and Iowa even got five foul-free minutes of good defense from Brommer, which is rare. If it weren't for the points off of turnovers and the offensive rebounds, Iowa would have suffocated Northwestern's offense. Unfortunately, taking care of the ball and rebounding are both, in their own way, parts of playing good defense, and Iowa couldn't do either Saturday.