It's Not Plagiarism If You Link To It: Canzeri, Coe, Derby And Woodbury News

Share All sharing options for: It's Not Plagiarism If You Link To It: Canzeri, Coe, Derby And Woodbury News

JORDAN CANZERI'S SEASON IS OVER. RossWB already covered it well. Jordan Canzeri will red shirt this season, according to his father. If you're looking for a bright side to Canzeri's injury it is that he still has four years to play three. Ferentz has yet to comment and probably won't until the next time he meets with the media. That will be next Wednesday when coach Campell and Morgan speak.

IOWA MAY HAVE PICKED UP THEIR FIRST VERBAL FOR 2013. Kinda. I'm not sure there is even a scholarship offer there. I assume there is, after certain requirements are met, like graduating from Junior College. Coe, if you recall, took to Twitter to complain about his coach asking him to switch to defensive line from running back. Later, Coe tweeted he was enjoying the defensive line in practice. Now, he says he can't wait to get to Iowa.

KIRK FERENTZ THE 6TH BEST COACH IN THE BIG TEN? According to Athlon.com he is. Athlon ranked the current Big Ten coaches and placed Urban Meyer at the top of the list. Ferentz is sandwiched between Bret Bielma and Bo Pelini. After Meyer Athlon lists Brady Hoke number two, Mark Dantonio three and Pat Fitzgerald number four.

IS IOWA MEN'S BASKETBALL A DARK HORSE FOR THE BIG TEN TITLE NEXT SEASON? The Hoosier Scoop is taking a too early look at 2012-'13 Big Ten basketball. Ryan Kartje believes Devyn Marble will become the go-to guy and Gesell could have a "2011 Dave Sobolewski role at Iowa." The upside for Iowa? A seven or eight seed in the NCAA Tournament. The potential downside? Another NIT invite.

AJ DERBY COMPETING FOR THE STARTING QUARTERBACK POSITION. Derby, who left Iowa to pursue his dreams of playing quarterback, is getting that chance at Coffeyville Community College in Kansas. Per Pat Harty, the QB position is wide open and Derby's new coach says "he's working hard."

MCCAFFERY GOING WITH GATENS, MAYBE TO TRY OUT FOR THE NBA. Alright, not really. But, Hawkeye hoops head coach Fran McCaffery is heading to the Portsmouth Invitational Tournament. Matt Gatens will participate in games there for NBA scouts. The PIT takes place April 11-14th. McCaffery is going purely for support of his player.

KING KONG HAS NOTHING ON ADAM WOODBURY. Courtesy of Mike Gesell's Instagram: 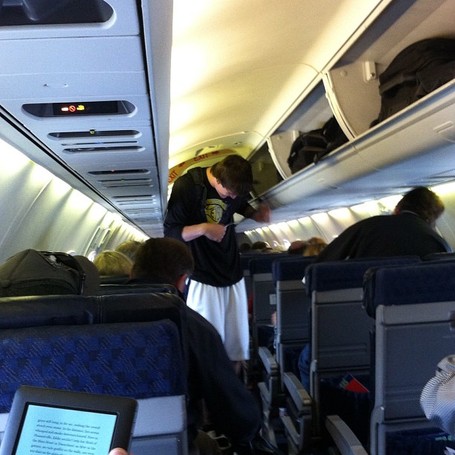 The two are on their way to New Orleans to play in the All-American Championship Sunday.

ANOTHER FOOTBALL SCHOLARSHIP OFFERED. Iowa is known for offering diamond in the rough recruits. Nathan Gerry is a 6'2" 206 pound athlete from Sioux Falls, South Dakota. Gerry currently holds offers from the Dakota schools and Montana. For a glimpse of Gerry in action, check his YouTubes.

IOWA DIDN'T GET A COMMIT FROM COLIN GOEBEL TUESDAY. But the 6'4" 275 pound Naperville, Illinois prospect was in Iowa City to take in spring practice. Goebel will decide between Iowa, Illinois and Wisconsin (to name a few) in the next couple of weeks. Goebel didn't commit but Iowa is currently his leader.

WHAT'S WRONG WITH IOWA BASEBALL? Ben Schuff, at the Daily Iowan, says it's the "lack of passion." Schuff is quoting coach Jack Dahm, overheard scolding his team. Dahm had the chance to clinch win #200 over Nebraska-Omaha Wednesday night. The Hawkeys fell in that one 3-1.