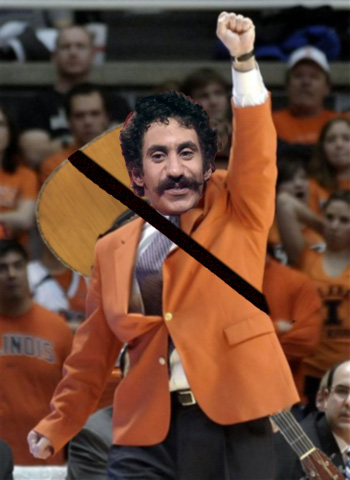 This is what our photo recreation experts believe the new Illinois coach might look like on the sideline.

In a surprising move, the University of Illinois has, apparently, named folk singer-songwriter Jim Croce as their new head coach. The news, which BHGP obtained by glancing quickly at the sports page of a fellow bus passenger, comes on the heels of the school's rejected offer to VCU coach Shaka Smart. Details of the new coach's deal are sketchy, as are the specifics of his basketball background, so we are left to speculate about what direction the hirsute Italian-American song-smith will take the team. Luckily, Croce has left an extensive catalog of song lyrics that allow us to guess at what we, as Iowa fans, can expect from the new coach of one of our most bitter rivals.

1) He already has made recruiting inroads in Chicago

Croce has extensive knowledge of a shooting guard/small forward from the south side of Chicago named Leroy Brown. Brown is reported to be 6'4" and has a reputation as a "mean" player. His nicknames include He is reputed to be "meaner than a junkyard dog", "badder than ol' King Kong", and is known as the "Meanest Baddest man in the whole damn town", "Treetop lover" (by the ladies) and "Sir" (by the men). It is unclear if Brown is any relation to former Illinois point guard Dee Brown.

2) He will likely slow things down

Croce appears to value time of possession very dearly and has stated a desire to "save time in a bottle... till eternity passes away." Although NCAA rules will limit his team's possessions to the maximum 35 seconds, look for the Croce-led Illini to milk the clock to its maximum extent. As the new head coach said, "But there never seems to be enough time/to do the things you want to do/once you find them," which we believe refers to Croce's Bo Ryan-esque commitment to using the clock to find the best shot.

3) He expects Illinois to contend immediately

This one is a bit cryptic, but Croce has said: "You don't tug on Superman's cape/You don't spit into the wind
You don't pull the mask off/the ol' Lone Ranger/and you don't mess around with Jim." We are assuming that "Superman" here refers to Ohio State, "the wind" is Michigan State, "the ol' Lone Ranger" is Wisconsin, and "Jim" is, of course, Jim Croce's Illinois team. Croce does add the caveat that "Jim" is vulnerable to a man named "Slim" with a cut-heavy offense. This could refer to the $limes of Iowa, or the back-cutting style of Bill Carmody's Northwestern teams.

Upon further study, it appears that Illinois has hired former Ohio University coach John Groce (pronounced "gross"), not Jim Croce, to head their program. It also appears that Jim Croce has been dead since 1973. We apologize for the error.

Thanks to the careful eye of reader Flakbait, even more errors have been found in the original article. Certain lyrics attributed to the non-coach Croce regarding the non-recruit Brown were in error, and have been corrected.