A Week of Practice in the Book

Share All sharing options for: A Week of Practice in the Book

Alright lets bring it in. Gentlemen, we've had a good week of practice. It's the kind of start that I and the rest of the coaching staff was looking for after how disappointing last year was. Now... I want you to be smart this weekend, don't ruin this good start by doing something stupid. OK, next week we'll dive in even...

...remember to read your playbook (holds up binder), you may not believe it but it does have some new stuff in it. What the hell is that noise? 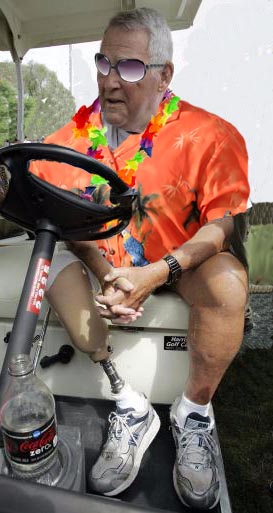 I know, I know. I'm late. As you can probably tell. Me and the Missus was in Hawaii and we decided to cap off a great vacation by becoming members of the "Mile High Club." Now evidently you're supposed to do the dirty in the bathroom and not the cockpit. You should have seen the pilots when we started D.B. Coopering.

Everyone is still stunned

Don't tell me you guys don't know about D.B. Coopering. Let's just say it involves $10,000 in one dollar bills, a parachute and a jar of applesauce. Anyway, we got put in the pokey for doing the pokey, but you're not going to believe this. The arresting officer was Erik Estrada and you remember how I directed that the episode of ChiPs? Well, let's just say it came in handy and long story short. I'm here now, so let's get down to business. But first I will take any questions.

A number of hands shoot up

Ummmmmmm Norm can I have a word with you?

Sorry, but your hand was not up. (Points) You there, young man.

Yeah, um, what the hell is going on?

Norm drives around the practice field in his golf cart

There are you happy?! Next question.

I've missed you too, George.

Oh, like James Earl Jones. Let me tell you, James Earl Jones can drink. We were on the set of Star Wars which always confused me because he just did voiceover work, while all I did was choreograph the lightsaber scenes. Anyway, we're drinking anything we can get our hands on, I mean it's the 70s, what else are you going to do? Anyway, James invites me into the recording studio and he's supposed to sound imposing, but I'm making faces and all he can do is laugh. And now the sound technicians are getting pissed, but that just makes us laugh more. Finally, we get all serious and he's recording his lines when all of a sudden I have to break wind really bad and I'm trying to hold it and trying to hold it, but I know it's no use and out comes the loudest, longest, smelliest fart I've ever had. It was so bad they had to literally burn the studio to the ground, I've got some of the ashes in an urn in my living room. Long story short, that's how they got the sound of the Death Star exploding.

Norm, that's great but I really need to talk to you.

Not now. Yes, question over there.

Yes, coach I had a question about one of the plays in the playbook.

I mean it looks like me and James are supposed to blitz, but two linebackers blitzing at the same time. That doesn't sound like something you would do.

Wait, did you say two linebackers blitzing at the same time? Give me that!

What the hell is this! How many times do I have to tell you: 4-3 Cover 2! It works Kirk, it works everytime. Every single time. Do you know how long it took and how hard it was to craft this play?

Let me guess. You were at Woodstock in 1969 when Jimi Hendrix got up and wailed and you and the Missus got so excited that you bumped a stranger, who spilled his bong water all over your love blanket and the spill showed a 4-3 defense with two safeties deep.

Wow, that is incredibly accurate. Except it was Sha Na Na playing and some security guard dumped water on us. I guess it's only free love if it isn't done on the stage. Fascist.

Here's the thing, this is Phil's play. Remember when you came up to me in December and told me you were going to retire.

You told me, you were going to resign.

Yeah, I was going to re-sign my contract and come back for two more years.

Those two words are usually pronounced two different ways Norm. You didn't even go to one coaches meeting after the bowl game.

You told me to enjoy my time off. Plus, have I ever attended a coaches meeting?

Alright, let's take a vote. All those in favor of having me back say aye!

All the players say AYE!!!

There you have it, I'm back. Now give me that playbook.

Norm rips everything out of it.

Alright, alright. I'll see everyone on Monday. Let's break it down. Hawks on three. One... two... three.

Everyone walks toward the lockerroom, except a few stragglers.

Are you really back?

Hahahahahahahahaha. No, you're not. But OK, I'll play along... who is the other defensive end?

I've made a huge mistake.