MARCHIFORNICATION 2012: THE SECOND ROUND LOOMS!

Share All sharing options for: MARCHIFORNICATION 2012: THE SECOND ROUND LOOMS!

With AIRBHG's highly suspicious win over Coach Vending Machine earlier today, the first round of Marchifornication V: The Not-So Final Frontier has wrapped up. Here's an updated bracket for your perusal. 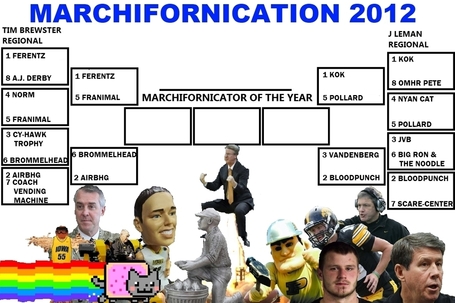 It was a bad year for 4-seeds, but the only true underdog win so far this year has been Brommelhead's triumph over the much-loathed New Cy-Hawk Trophy.

Can the Brommelhead keep his winning ways going in round two? It won't be easy; he's drawn a match-up with the great and terrible AIRBHG.

Will Iowa fandom be torn asunder by the titanic KF/Franimal clash in round two?

Can anything prevent a final showdown between KF and KOK?

Will Jamie Pollard be rendered inconsolable by yet another Marchifornication failure?

And what the hell is Matt Gatens up to anyway?

Predictions, wild musings, and death threats are welcome in the comments.