It's Not Plagiarism If You Link To It: Hawkeye Football Holds Pro Day In Iowa City

Share All sharing options for: It's Not Plagiarism If You Link To It: Hawkeye Football Holds Pro Day In Iowa City 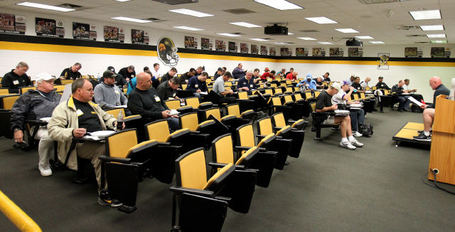 IOWA SENIORS SHOW OFF FOR NFL SCOUTS. The Hawkeye football team held their "Pro Day" in Iowa City yesterday. Local media isn't allowed to report from "Pro Day" but there are some tidbits around the web. There were 29 NFL team scouts in attendance. The Redskins, Cowboys and Jets' scouts were not there. In addition to scouts there was Kansas City Chiefs GM Scott Pioli and Chiefs head coach Romeo Crennel. Steelers GM Kevin Colbert and Packers GM Ted Thompson were also there.

THESE AREN'T COMPLETE RESULTS BUT SOMETHING FROM NFL.COM. Here are some of the notes posted.

Here are some results from the combine for comparison: Early results
MIKE DANIELS ISN'T LISTED. And according to this tweet he's still recovering from shoulder surgery. Daniels will workout for scouts on April 4th.
ACCORDING TO THE SPORTING NEWS, REIFF AND MCNUTT WERE OK, GETTIS AWESOME. Russ Lande, of The Sporting News (dot com), writes that Reiff and McNutt were "solid but unspectacular" in their Pro Day workouts. Reiff does not appear to Lande to be a "premier athlete" and has a "bit of a gut." McNutt lacked "explosiveness" and looked "upright and stiff." Adam Gettis got some work at center and according to Lande, displayed "good strength."

JORDAN BERNSTINE IS GETTING INTEREST FROM AN UNDISCLOSED AFC TEAM. Per this Scout.com article, Bernstine will participate in a private workout for the team not named. In the interview with Scout.com, Bernstine says he's hearing NFL scouts "like (his) versatility" and that he's a "physical player." Bernstine also added that Bob Sanders is his favorite player and the safety he tries to emulate the most.

FORMER HAWKEYE ROBERT GALLERY IS A PATRIOT. Gallery, released by Seattle last week, signed a one-year deal with the New England Patriots. Big Bob is entering his ninth season as an NFL offensive lineman. He's battled injuries his last three seasons in the league and may serve as a back-up option at guard for the Patriots. Starter or not, Mike Hlas writes that finally, Gallery can play for a winning team.

STICKING WITH IOWA FOOTBALL AND LOOKING AHEAD AT CURRENT HAWKEYE WIDE RECEIVERS. Part three of Morehouse's Four Downs takes a look at Iowa's wide receiver position. Iowa loses the best wide receiver in its history, James Vandenberg loses his top target. Marvin McNutt will play on Sundays but how does that leave Iowa?

There's two returning seniors, Keenan Davis and Steven Staggs. There's also Kevonte Martin-Manley, a sophomore-to-be that shined at times and disappeared at others. Looking for experienced wide receivers beyond that on the roster is a difficult task. Jordan Cotton and Don Shumpert have played a few snaps. That's it, a few.

There's also a chance Damon Bullock switches back to wide receiver from running back again. Ferentz said he fits at running back, that was during Insight.com Bowl prep. Still, something to watch.

Jacob Hillyer (RS Frosh) is my newcomer to watch here (and Mas Casa's too). He and Marcus Grant were two wide receiver recruits that signed with Iowa in 2011. Grant has since moved on and will be playing football at Boston College. Hillyer is a legit 6'4" 200 pound wide receiver. He'll wow some people at Iowa's Spring open practice simply by his size alone. He'll have some ups and downs as freshmen often do but he'll be a good one when it's all said and done.

MEN'S HOOPS WALK-ON BRANDEN STUBBS WILL TRANSFER. "Stubby" as head coach Fran McCaffery called him will move on from the Iowa basketball program. Fans may remember him most for his infectious enthusiasm seen on Iowa's bench. Hopefully Stubbs finds a place to play and also a place to pay for his final two years of school.

ZACH MCCABE IS REACHING GLENN WORLEY FOUL MASTER STATUS. Zach McCabe's season ended after he fouled out of Iowa's loss to Oregon in the NIT. McCabe finished the year with 119 personal fouls. That breaks down to an average of 3.4 per game. Worley also once had a 119 foul season (02-03). Worley's per game average was an impressive 3.8. Worley also recorded 116 fouls ('01-02) and 88 ('03-04). McCabe only had 69 fouls his freshman year but assuming he plays two more years he might become the foulest fouler to ever wear a Hawkeye uniform.

KAMILLE WAHLIN SETS RECORD IN IOWA'S LOSS TO CALIFORNIA. In her last game as a Hawkeye Kamille Wahlin became the program's iron women. Wahlin broke the record for most games played in a career with 127. She also leaves Iowa eighth all-time in scoring (1,473 points) and third all-time in assists (427).

EXPECT A DECISION ABOUT IOWA VS. NORTHERN IOWA IN DES MOINES WITHIN 30 DAYS. Gary Barta told Scott Dochterman that now the season is over he's getting to work on Iowa's future schedule, particularly in-state games. Iowa vs. Iowa State is happening. Iowa versus Drake or UNI is still to be decided. Iowa won't travel to either but may meet one or both at a neutral site, that being Wells Fargo Arena in Des Moines.