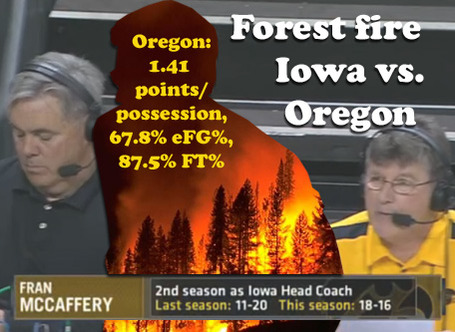 It was sad but completely appropriate that Iowa's season ended in an offensive fire-bombing by an opposing team. All year, Iowa has been susceptible to these kinds of defensive performances, and now that the season is over it's fair to say that this is just who they are. Or were. Especially against teams with quality perimeter players, and especially on the road, Iowa was always a bone-dry stand of Ponderosa pine, ready to ignite. They just chose a particularly inopportune time to get burned last night.

To put Oregon's performance in context, this was Iowa's worst defensive efficiency number of the year, and that is in a year where they put up some very high numbers in this category. The Hawks gave up 108 points, which is bad enough, but on a per possession basis it was... also bad: 1.41 points per possession, which barely edges their previous worst against Northwestern. That number may not jump out at you, but think about it this way: if Iowa just allowed the opposing team to walk in for a layup every possession, they would give up 2.00 points per possession. Giving up 1.4 points per possession is not quite as bad as making your defense a layup line, but it's not that far off, either.

Do you think that's hyperbole? It is not. In the second half, Iowa gave up 61 points on 36.8 possessions, which works out to an efficiency figure of 1.66 points per possession. That is unheard of. That is beyond unheard of. It's like a football team giving up 50 points in a half. Oregon made 18 of 25 shots in the second half, made 7-11 threes, and made 18-20 free throws. Iowa had the privilege of pulling down a defensive rebound only five times in the entire second half. They had an effective field goal percentage 86%. For context, 50% is an average eFG% number, 60% is excellent, and 86% should not be possible when there are sentient human defenders on the court.

Which is a roundabout way of saying that Oregon deserves major kudos for their offensive performance last night. They put on quite a show and made all the shots we gave them. And not to take anything away from their excellent play, but we offered very little resistance. In the first half, Iowa got slightly burned by the surprisingly strong play (and free throw shooting) of Olu Ashaolu, and perhaps as response to that (or perhaps because of foul trouble for Zach McCabe and Melsahn Basabe), Fran ordered the team to play zone for much of the second half. That didn't work out at all. E.J. Singler and Garrett Sim feasted on the wide-open looks the zone provided, and a game which Iowa once led by 15 points turned into a rout.

The really sad part is that the Hawks wasted their best offensive game of the season. Iowa scored 1.26 points per possession, had ten three-pointers (including seven from Devyn Marble), made 13-15 free throws, and committed only eight turnovers in a very fast-paced game. Iowa has had better offensive efficiency numbers, but that was against teams like Northern Illinois and Boise State, not on the road against a legitimately good major conference team. The seven Marble threes are particularly shocking: we will likely never seen a game like that from Devyn Marble ever again. I'm not saying he won't continue to be a good player or that he won't improve his three-point shooting, but career 29% three-point shooters just don't make seven three-pointers that often. Hell, 39% three-point shooters don't do that.

You could quibble with a few aspects of Iowa's offensive play -- Gatens didn't seek out his shot very much and wound up with just seven points, McCabe had another inexplicable charge right into a waiting defender's chest, the team kept feeding Andrew Brommer in the post for some reason -- but those were minor problems. Iowa played a brilliant game on offense, thanks largely to Marble, but also to Aaron White, who really came on in the second half, and Basabe, who followed up on his good performance against Dayton with a very efficient 17 points on 13 shots. It would have been nice for Gatens to go out with a bang, but Oregon devoted a lot of attention to him and forced Iowa to find points elsewhere in the line-up. To their credit, they did. Bryce Cartwright did a beautiful job orchestrating the offense in his final game, finishing with 10 assists and just two steals, and McCabe added some quality play as long as the zebras allowed him to stay in the game. Offense wasn't the problem for Iowa.

I hate to end the season on a down note like this, because Iowa really did accomplish quite a bit and the second round of the NIT is more than most fans thought was possible. But the team's tendency to give up these eye-popping totals on defense is a concern heading forward. My hope and honest guess is that it was primarily a problem of personnel, and that it will improve if and when Iowa gets some better defenders at point guard, power forward, and center.

It's some consolation that Iowa got torched by the very best. Iowa put up terrible defensive efficiency numbers (worse than 1.2 points per possession) to the following teams: Creighton, UNI, Iowa State, Michigan State (twice), Nebraska, Indiana, Northwestern and Oregon. Apart from Nebraska and UNI, that's a who's who of the best offenses in the country, so there's perhaps not quite as much shame in those numbers as there otherwise would be. But still, some shame.

To make a brief digression, I've been thinking about whether basketball teams really change or whether they are basically fixed quantities. The popular narrative is that teams frequently "come together" and "get it", but that is often exaggerated. There is a lot of random variation in a team's performance, and when you add in another team with their own fluctuations, it becomes very easy for apparent patterns to emerge that don't reflect any actual change in a team's quality. I'm not saying that coaches don't have an effect or that players don't improve, just that the effect of that kind of thing is pretty marginal when compared with the basic abilities of the players. Iowa's defense provides a good example. If you thought Iowa was catching on and tightening up their defense as the year went on, consider the following chart of their defensive efficiency from November to March: 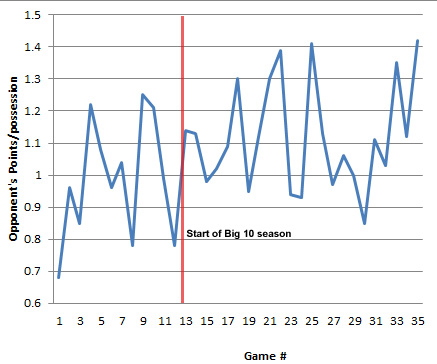 There's a big difference between the Big Ten season and the early games, obviously, but even within the Big Ten schedule, there's not a noticeable improvement in the team's defense. In fact it seems to have gotten worse.

One way to look at Iowa's defense is to think of them the way Warren Buffett might think of a company: strip away the narratives, the noise and the day-to-day news, and focus on what resources the team has and what they can do. If you forgot about the recent history of Iowa's games and just imagined that you drew this particular assortment of players at random from a gym filled with all the players in college basketball, what assets would you have in terms of defense and what kinds of defensive schemes could you use them in? I'll probably go into this more in my season in review article, but I think Fran McCaffery was working with some pretty limited defensive resources. Injuries, especially those to Cartwright and May, only made the situation worse. At a certain point, I think Fran made a strategic decision that this team would only ever win with offense, not defense, and went to a line-up of predominantly Gatens, Marble, Cartwright, White and McCabe. Basabe and Oglesby became the primary bench players, and May, Brommer, Archie and Olaseni disappeared from the lineup almost entirely. Iowa paid the price in terms of several horrendous defensive performances, but the offense did improve a little bit: 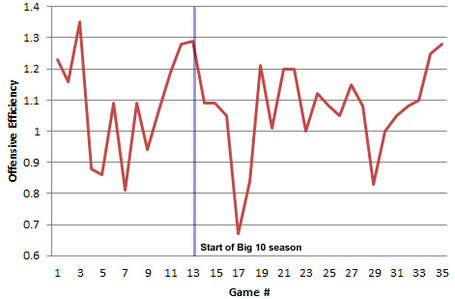 The ball started to move much more fluidly, and the three-point game really opened up once McCabe and White became involved in the pick-and-pop with Gatens and Marble. Iowa wasn't a great team by any stretch of the imagination, but they did win a surprisingly high number of games in the Big Ten and made the second round of the NIT. That's pretty darn good, all things considered.