Share All sharing options for: Why I Don’t Care for the Oregon Ducks (and their garish basketball court)

My best friend is the president of a very successful advertising agency. My wife has worked in advertising her entire professional life. I own my own business, and marketing and advertising is the lifeblood of my success. And, lastly, I am one of those boorish devoted fans of Apple products and am so, to be completely honest, because of their slick branding. So, I appreciate as much if not more than the average person, the value (indeed the importance) of branding and advertising in the everyday consumer culture of America. But I find the degree to which the University of Oregon has pimped out its brand vis-à-vis their college athletics to be extraordinary, if not pitiable. Let me explain.

There is a perception out there that college sports in the contemporary age are critical to the branding and brand awareness of a college or university on the whole and a university's sports programs can (and often do) generate tons of free advertising, publicity and aid the marketing bottom line, and are crucial to alumni and donor connectivity. I get that and support that view. But, I think all too often history is ignored in this country and one would hope the one place it might still have a pulse would be a college campus. It is important to remember that the primary reason sports even exist on college campuses is they intended to add value to the educational experience of the participants. In other words, college athletics were always intended to be about an educational experience that focused on competing, learning and serving. It's not particularly controversial to point out that college sports were not intended to be an overtly commercialized enterprise that emphasizes brand, market share and TV ratings. I recognize that they have all too often become just that. But that was not the role they were intended to play in the beginning.

College sports of course must bow to the changing times, and in the economic environment of the past quarter century, many universities have largely realized they need to rely on commercial elements to grow. History and evolution have shown too that college sports can create positive commercial benefits to the broader mission of the institution. But, and this is important I think, these commercial benefits should NOT reflect the primary purpose of the institution. In other words, the University of Iowa should not exist first and foremost as a great commercial enterprise and an exceptional canvas for commercial entities to market their wares; it should exist for the reasons it was founded in the first place, to be an excellent academic institution. But when it comes to the current purpose of the University of Oregon, it doesn't really appear this way at all.

The disappointing impression I am left with as regards the University of Oregon is this: it looks like a gigantic billboard dedicated to the personal and commercial use and appropriation of Phil Knight and his Nike Corporation.

One would hope that even today - especially today - college sports at the highest levels could exist as more than just a measuring stick for the competitive and commercial value of an academic institution. That seems increasingly lost on us though, because these days college sports are less and less about learning through competition, leadership development and the various core, original values that brought sports on campus in the first place, and are instead precariously serving a newer more ominous mission to zealously gain attention for the purpose of generating revenue. What should most clearly be the secondary for many universities with big time college athletic programs has become the primary, and it's too bad. This is not to say that college sports do not continue to be about learning and developing student-athletes for successful lives, that still very much happens. But when you look at the University of Oregon, you see something over and over again: Nike Corporation and Phil Knight. Phil Knight has almost totally eclipsed the public service aspect of that university's mission. One would hope that Oregon, even today after all the corporate money they've injected into their veins, is able to still operate autonomously in service to the state of Oregon as an academic institution, first and foremost.

It does appear though as if the university desperately needs the money that Phil Knight has given, because I don't know too many academics that could in good conscience covet this sort of irresistible bedfellow. I'm not suggesting either that Oregon is alone in all this, to me the University of Oregon is not completely unlike Oklahoma State and its uber-benefactor, T. Boone Pickens. Although, I would have to think how Pickens' relationship with Oklahoma State has obviously advanced his principal financial goals in the oil and natural gas industry. I don't doubt for one second that they exist, I just don't see them as obviously and overwhelmingly as I see the obvious benefits that Oregon provides for Phil Knight.

And as for that fugly Oregon basketball court... 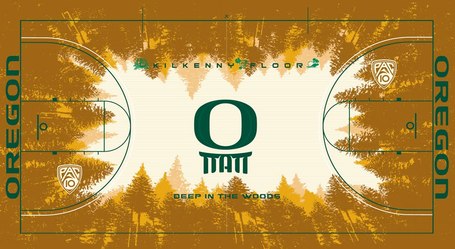 In the beginning it was the Oregon football uniforms that were in service to Phil Knight and Nike, but they're well beyond that now. Consider Matt Court, the school's basketball court, which resides inside Matthew Knight Arena. The court is designed to pay respect to Oregon's 1939 NCAA National Championship Team, the "Tall Firs" as they were known, as well as Matthew Knight---Phil Knight's son who died while scuba diving in El Salvador and for whom the arena was named---and Pat Kilkenny a recent athletic director at Oregon. The garish nature of the floor itself is an effort, says the designer, to make it an unenjoyable place for visiting teams to compete. As far as I can tell, mission accomplished because I would be shocked if any Iowa player derives any pleasure from playing on the court beyond any sort of intrigue due to it's novelty. I can't say that I connect the dots on any elements of the designers intentions outside Oregon's logo, and since I am not an Oregon alum or fan it might be that's the point. The court does not look like anything to me other than a substandard hardwood floor sanding job. The two most prominent aspects of the court beyond the Oregon name and logo are the names Kilkenny and MATT, at center court. "Deep in the Woods" is also printed near center court and not having spent much time deep in the woods, it might be the design that permeates the court is some sort of graphical representation the designer created to channel that experience---when deep in the woods this is what things looks like. I guess I just don't get it but I do get this, it's not pleasurable to watch a basketball game on television that is played on that court.

But back to Phil Knight...I don't begrudge Phil Knight his love of Oregon athletics. I think the sort of dream he is living out with his giving to the Oregon athletic department is the kind that other hyper wealthy donors have dreamed of long before Phil Knight was able to make it a reality. Ultimately it is the University of Oregon's responsibility to protect itself from unwelcome corporate encroachment. They've elected to walk the fine line and all indications are they are comfortable with it, and it might just be that without this dirty dancing they would be a struggling state school subservient to the unpredictable ups and downs of state funding with an identity as little more than a regional operator in higher education. Who knows, they might still believe they are just that when looked at in comparison to most other large Tier I research institutions. The state of Oregon ranks 43rd in the nation in the amount the state spends per student on its community colleges and universities and enrollment at Oregon is sizable but nothing that outstrips the state's population. But indications are that Phil Knight, who I would assume is a hero to many Oregonians, has made the University of Oregon a more national and international university through his branding efforts, as they are trending up in nonresident enrollment and it seems that over-night they have become a national star in college football.

I respect the school's right to grow and choose a path to growth that cut across the grain of a host of histories and traditions in college athletics. Choosing to have an ugly basketball court, a never-ending rotation of branded football uniforms and the like is all-innocent on the face of it. But make no mistake; the University of Oregon is not promoting in any way the sort of values that many in higher education are comfortable. Phil Knight has been given what appears to be free reign to brand the University of Oregon how he likes, and other university athletic departments have seen the enormous public relations benefits of this and are partnering with him to recreate Oregon's success (TCU for example). It was not too long ago that Iowa did this exact sort of thing. Hayden Fry came in and rebranded the Iowa Hawkeyes football program top to bottom in the image of the Pittsburgh Steelers with a logo that no longer resembled Woody Woodpecker but a tiger, and he was so successful that it was copied outright by his former assistant Bill Snyder at Kansas State. But that, to me, is different than what Phil Knight has done and is doing.

Hayden Fry was the coach when he retooled the Iowa identity, which is very much different than being an ubber fan, and while he did strike a pretty good financial deal on the rebranding with Iowa (he made money on T-shirts I am sure and potentially much more), the logo was Iowa's to own and, most importantly, to control. Moreover, Fry did not continue to be the overlord on any other makeovers in any other sport at Iowa, and to my knowledge all these years later, not much at Iowa has been named in Hayden Fry's honor---not the football field, certainly not the basketball court, any practice facilities, or even the pink bathrooms at Kinnick. Finally, Hayden Fry was not a professional marketer who made money off football program and athletic programs by virtue of how they market themselves. He did his service to Iowa and when Snyder rebranded K-State I'm pretty sure Hayden Fry did not benefit much or at all financially (he might have been paid a consulting fee but I doubt much more).

But I want to close with my essential point. I would hope that Iowa and, really, every university would hold the point of view that the institution is the brand, not a billboard. It appears to me that Oregon has chosen another path and for that reason, I don't care for them (or their basketball court).