NCAA Bracket Madness: Who To Love? Who To Hate?

Share All sharing options for: NCAA Bracket Madness: Who To Love? Who To Hate?

NOTE: Don't forget to join the BHGP College Pick 'Em group if you haven't done so yet.

So obviously Iowa isn't in the NCAA Tournament this year (hopefully this year's NIT campaign winds up being a thoroughly enjoyable and incredibly useful stepping stone on our way back to the NCAA Tournament), but there's still an NCAA Tournament going on and you're (probably) still going to watch. Because even without Iowa in the mix, the opening weekend of the NCAA Tournament is still one of the greatest sports experiences of the year. The nonstop flow of games from noon to midnight, the crazy comebacks, the amazing chokejobs, the breathtaking buzzer-beaters, the joyous upsets, the pain of ruined brackets... we love it all, which is why we keep coming back year after year.

But it's still fun to have a rooting interest (and, perhaps more importantly, a hating interest) in this big dog and pony show, so it might be useful to see where we all stand on that issue. My suggestions include:

REASONS TO LIKE THEM: The Shocker and the shocker; a mid-major you might actually be able to root for over a few weeks (unlike the fleeting, one night stand nature of most of the mid-major underdogs in this tourney).

REASONS TO LIKE THEM: The Beach; they're playing New Mexico.

REASONS TO LIKE THEM: Aside from Iowa State, they might be the most local team in the tournament; points for having a unique nickname (Jackrabbits).

REASONS TO LIKE THEM: The rare power-conference school that's a real underdog; pulled off 2001 Iowa's four wins-in-four days trick in the conference tournament; Boulder is awesome; one of the greatest mascots in all of college sports.

REASONS TO LIKE THEM: Fun nickname (the Mountain Hawks), exciting point guard, and -- oh yeah -- they're playing Duke.

REASONS TO HATE THEM: It's no fun to root for the favorite over the plucky underdog.

REASONS TO HATE THEM: Ahem. 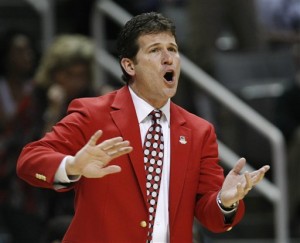 REASONS TO HATE THEM: Self-evident. (If you need a refresher course, though, I'm sure Jebus can help you.)

REASONS TO HATE THEM: Beat our sister-school, Iona, last night.

REASONS TO LOVE THEM: Conference pride!

REASONS TO HATE THEM: We spend most of the season hating these guys; do we really want to change that for a few weeks now? Also, OMHR is one of the B1G teams in the tournament and, by Delany edict, we must hate them.

REASONS TO LOVE THEM: Like South Dakota State, they're pretty local; also have state of Iowa ties with the McDermott father-son power duo.

REASONS TO HATE THEM: McDermott the Elder has strong ISU ties and they did beat the holy bejeezus out of us earlier this season.

Yahoo! Tourney Pick'em supports SBNation and the best college sports tournament of the year. Join the bracket pools of Drew Brees, Michael Phelps, and Lil Wayne-- all while competing in the $5 million Perfect Bracket and $10,000 Best Bracket Sweepstakes. Be part of the best and biggest Yahoo! Sports tourney game yet – sign up today.