On Sunday night, Iowa found out they would host an NIT game against Dayton. Thirty-six hours later, in the middle of spring break, Iowa put 13,190 in the stands at Carver Hawkeye Arena for that game. It wasn't your typical basketball crowd, either; this was as close to the hungry, rabid mass of humanity that inhabits Kinnick Stadium on fall Saturdays as I've seen for basketball. McCaffery started his postgame radio interview not with his frontcourt (which is amazing, considering White, McCabe, and Basabe combined for a staggering 60 points and 24 rebounds), but with the crowd. Dayton coach Arch Miller called the arena "a bees nest" and said his team was victim of "a special environment, a postseason environment."

As Mike Hlas points out this morning, the CHA crowd was larger than any two other NIT attendances combined. The next closest, Tennessee, filled just 29% of capacity. Iowa's second round opponent, Oregon, drew just 5,189 (42% of capacity). The Pac-12 regular season champions, Washington, brought in 2,800 fans to an arena that seats 10,000. And, in the only other game hosted by a Big Ten team, just Northwestern showed why it's never been to an NCAA Tournament: 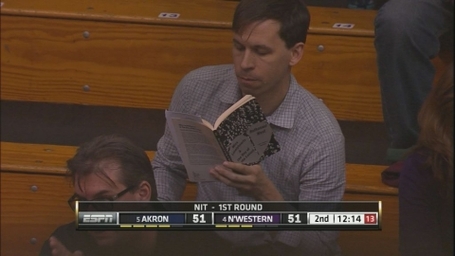 They say a picture speaks a thousand words. That picture of a Northwestern fan reading Miss Lonelyhearts with 12:14 left in a tie game speaks about 2,319, one for each Northwestern fan in attendance for their nailbiting victory over Akron.

(Terrorist fist jab to BTN's Brent Yarina for the screencap)