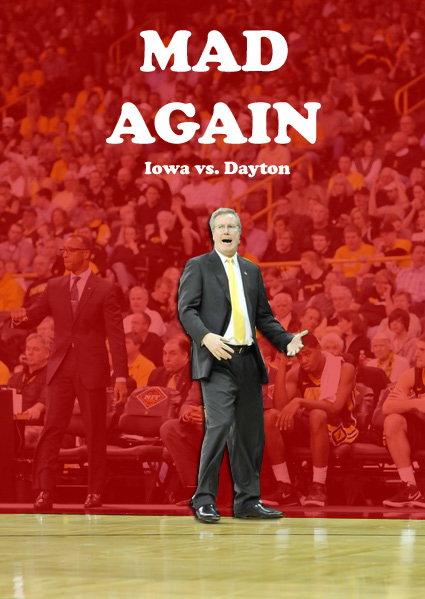 Pure, unadulterated happiness: a 60 year-old man dancing a jig with his grandson in the concourse, grown men howling like banshees, a child wearing a popcorn box as a hat and dancing in the aisles: these were just some of the sights as Iowa knocked off Dayton 84-75 in an absolutely bonkers Carver-Hawkeye Arena. Dayton was probably a little bummed when they heard they would have to go on the road for the NIT, but they couldn't have expected this. No one told them they would be walking into a mental institution.

The mania is easy to understand. It had been six years since Iowa played their last post-season basketball game. Six years. It was as if the fans had been on a hunger strike and then got to break it at the Golden Corral. They gobbled up every morsel of good play, and the Hawks gave them plenty: numerous Aaron White dunks (including an amazing one off a half-court lob from Bryce Cartwright that made SportsCenters top plays), a sick Melsahn Basabe reverse dunk, and Zach McCabe owning the interior like he was Shaquille O'Neal -- and that was just in the first three minutes. The good times just kept rolling on, especially after the Hawks seemed to make an adjustment on their perimeter defense midway through the second half and limited the Flyers' three-point shooting. What might have seemed like a consolation prize to a lot of other teams had the atmosphere of a championship game in Carver.

Here's what it was like: you know how when you go from a hot tub to a swimming pool, the water suddenly seems much colder, but if you went from an icy lake to the same pool, it would seem hot? That's what the NIT is like for Iowa fans. We've been out in the cold for so long that we're overjoyed to be someplace warm for once. You know what else that analogy describes? What it must have been like for the Iowa big men to go from playing against Derrick Nix and Adreian Payne on Friday to playing against the Dayton big men Tuesday. You forget after a while just how different the Big Ten is from other leagues simply in terms of size and strength, but it was night and day. Whereas McCabe and Basabe had sometimes struggled to get position or clear shooting angles against various bruisers in the Big Ten, they had no such difficulties against the Flyers. McCabe and Basabe shot a combined 15-18 and about 12 of those shots were identical five-foot angled bank shots. To combine two analogies awkwardly, it was like going from a hunger strike in an icy lake to spooning up banana pudding at Golden Corral -- in a hot tub.

But as sweet as McCabe and Basabe's play was, Aaron White may have been even better. He was everywhere, running on the break, making jump shots, grabbing offensive rebounds, and dunking on fools. The offensive rebounds especially seemed to break Dayton's spirit. They would defend well for 20 seconds, finally force an Iowa miss, and then that damned red-head kid would fly in and keep the play alive. I almost think "Dunk L'Orange" is too jocular a nickname for this dude. How about Aaron Motherfucking White?

Matt Gatens had a pretty quiet night in what might have been was his last game at home, but it was partly by design. Fran McCaffery stuck Gatens on Dayton's best perimeter shooters for much of the game -- frequently Paul Williams and Chris Johnson -- and Dayton stuck their best perimeter defender -- Johnson -- on Gatens. Johnson and Gatens canceled each other out almost exactly, with Gatens scoring seven points on 2-9 shooting and Johnson scoring 8 on 3-8 shooting.

And while Gatens expended a lot of effort on defense, as a whole the first 30 minutes of the game were pretty defense-light. Iowa put up 44 points in the first 20 minutes on a ridiculous 66.7% eFG%, but Dayton managed to hang in there thanks to 10 offensive rebounds and six three-pointers. Dayton even seemed to have Iowa figured out at the start of the second half, as lightning-quick Flyer guard Kevin Dillard (who had a terrific game) went by McCabe in the pick and roll again and again. The Hawks adjusted by switching to a 3-2 zone (I think) that took the pick and roll out of the equation and did a much better job of keeping track of three-point shooters. The difference showed in the stats, as Dayton went from an eFG% of 51.4% in the first half to one of 40.3% in the second (and that's including two meaningless threes in the last minute).

All in all it was a very satisfying win, and one of Iowa's more complete games of the season. The most positive thing is that it was the first game in a while where Iowa seemed to get stronger as the game went on. The usual pattern is for the Hawks to get up 15 and then hang on for dear life, so it was nice to see them reverse that trend. Not every team will offer as little defensive resistance as Dayton, and the Hawks will be forced to go on the road next and learn how to play on the hideous Phil Knight fantasia that is Oregon's home court, but man, that was fun.