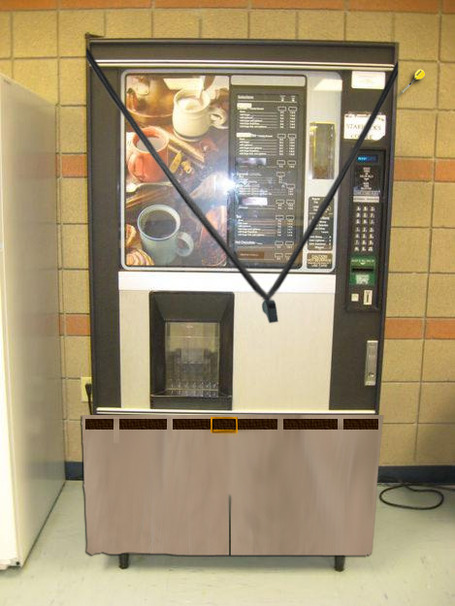 Head coach Kirk Ferentz described how the machine got the job:

"I'll be honest with you: I knew months ago that I wanted to keep a lot of the same guys on my staff, it was just a matter of who would do what. So I got out my sharpie, labeled some darts with "tight ends coach", "linebacker coach" and the like, then gathered the assistants in the lounge. I told them to close their eyes and then turned around and started chucking darts over my head. I guess one of the darts went a bit astray. Must not have heard it over all the caterwauling and 'Jesus Christ, was that a dart!?' and so on."

The matter would have been resolved quickly, but a miscommunication between Ferentz and his assistant resulted in the machine being hired at a salary of $225,000 per year.

"I had to take a call, so I told my feather-brained, near-sighted secretary, Miss [Yvette] Bumblepot, to track down all the darts and assign the proper jobs to the people that I had struck. She dutifully found all the darts, including the one in the machine, and made up the contracts."

When asked if he could rescind the offer and find a more suitable, human candidate for the job, Ferentz said it was impossible. "Those were legally binding darts."

"Besides," added Ferentz, "I think Natty will do a fine job as our QB coach. At first I was kicking myself, but the more I thought about it, the more he seemed to fit. We value continuity here at Iowa, and this particular machine has been with us longer than I have -- since 1982. He's here day-in and day-out, never complains, never seeks out the spotlight, just gives and gives. And we've been paying him pocket change for years, so the raise is due."

Ferentz went on to note that he believes the machine is well prepared for the position. "The main responsibility of that particular coaching job is getting our quarterbacks warmed-up and focused, and nothing is better for that, in my humble opinion, than a hot cup of French vanilla-flavored instant jamoke."

UPDATE: The National vending machine has been let go following a dispute with head coach Kirk Ferentz. The machine, whose digital read-out normally displays a friendly message of "How about some coffee?", reportedly began running an altered message that read "How about that Dana Holgersen? I like the way he thinks" soon after its hire was announced. "The machine had obviously gone mad with power," said a visibly shaken and coffee-bespattered Ferentz late yesterday. "He resisted, of course -- burned me pretty good -- but eventually I was able to fight through the scalding liquid and remove his memory modules. Then, as a precautionary measure, I hacked him to pieces with a safety axe, hauled his components over to the school foundry, and, with my last ounce of strength, threw him into a vat of molten steel. So that position is vacant again. We will take our time with the search and alter our hiring procedures to avoid any more errors of this type. Maybe use a hat or something."

The University of Iowa physical plant announced that the machine will be replaced by National's newest model coffee machine, the N-1000 model, which features eight coffee flavors and enhanced artificial intelligence for "anticipation of the customer's beverage needs."