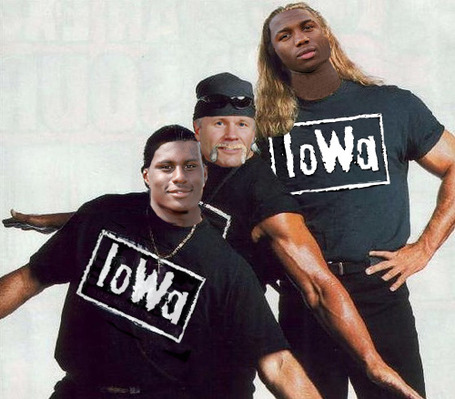 Reese Morgan (center) and the future of Iowa defense

IOWA CITY (AP) - In a move that surprised players and fans alike, veteran Iowa offensive line coach Reese Morgan has decided to switch his allegiance to the defensive line.

The move came Tuesday in the Iowa football team's weight room as Morgan helped the defensive line win a weightlifting challenge in a spectacle which has quickly earned the moniker "Bash at the Bench."

The seeds for both the event and Morgan's switch were planted the day after signing day when recent Hawkeye signee Jaleel Johnson showed up unannounced in the middle of a weight lifting session.

Johnson left immediately after his speech, but returned a day later. This time with fellow signee Faith Ekakitie, who proceeded to lambaste the Iowa offensive line.

Rightly frustrated with the mouthy newcomers, Iowa senior-to-be James Ferentz proposed a battle between the new signees for Tuesday - a bench press competition, most reps of 225 earns bragging rights.

That was fine with Johnson and Ekakitie, who told Ferentz to find two other people and have it be a three-on-three encounter.

Rumors ran rampant during the weekend about who the defensive line's third member would be. Lavar Woods was the prevailing choice, but Johnson raised an uproar with a Facebook post citing New York Giants linebacker coach Jim Hermann.

Ekakitie, for his part, remained mum, only promising that it would be a surprise.

Morgan's appearance definitely sufficed as a surprise. The five participants - Johnson, Ferentz, Ekakitie and guards Matt Tobin and Brandon Scherff - alternated rounds and Ferentz, as the final lifter for the offensive linemen, needed just six reps to give the offense the victory.

Ferentz was through three reps when Morgan appeared in the weight room and sauntered to the contest, clapping hands with players and pointing ominously to Johnson and Ekakitie as he did.

Morgan pulled Tobin away behind Ferentz and acted as the center's spotter. Ferentz easily put up rep four with Morgan's encouragement and locked out on rep five.

Morgan, though, quickly grabbed the bar before Ferentz could bring it back down and put it on the standards, ensuring a win by the defensive linemen in the process.

Stunned and puzzled by what just happened, the offensive players that were ready to celebrate quieted to a hush as Morgan stared a moment at Johnson and Ekakitie before breaking into a huge grin and hugging the incoming freshmen.

That gesture appeared to snap the offensive players out of their stupor and many of them showered the trio with athletic tape and Dixie cups as Morgan mockingly raised his new pupils arms in victory.

To cement his switch, Morgan proceeded to give a rambling speech to all players in attendence.

"The first things you need to realize brother is that this right here is the future of Iowa football brother," Morgan said pointing to Johnson and Ekakitie. "Everybody was wondering who the third man was going to be brother, well who knows more about an offensive line's weakness than me?

Morgan then proceeded to rip his shirt off and play his weight belt like a guitar before exiting with Johnson and Ekakitie. He has not been available to the public since, but is rumored to be growing a dark beard and suddenly has a penchant for bandanas. 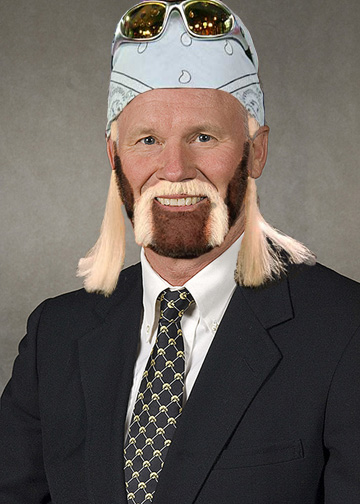