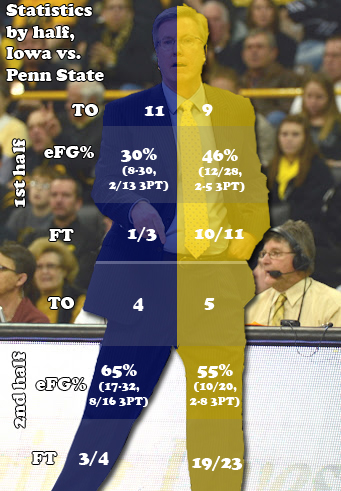 Saturday was a feel-good game at Carver: the 1986-87 team was there and received a very warm welcome from the fans, the current Hawks came out in the sharp-looking throwback unis, and the first half went about as well as any the team has had all year. Aaron White was the star on offense and defense, nailing two threes, sprinting behind the defense to catch and convert long alley-oop pass from Bryce Cartwright, and blocking two shots. And the team's defense as a whole was very good. Many times it looked as though Penn State had the ball in position on the block for a layup, only to have a Hawkeye player step in for a charge, or a strip, or a block. That harassment in the post, combined with some terrifically bad shooting by Penn State, made it feel like the Nittany Lions wouldn't crack 20 all game. The score was 29-10 with five minutes left in the half, and the game felt effectively over.

But just to throw a little cold water on the proceedings, note two things:

To say Iowa let up would be an understatement. They seemed to take the foot off the gas as soon as the second half started, using up almost the entire shot clock on every possession on offense and allowing Penn State open look after open look on defense. Iowa got to the line 23 times in the second half and that was enough to stave off a Penn State comeback, but just be aware of that context when you think about whether Iowa's defense has turned the corner. You have to grade teams on a curve when it comes to defensive performance, and Penn State represented a very easy defensive test. Iowa aced the first 20 minutes, then just filled in "C" for every question on the last 20.

But one good half of defense is better than none, and Iowa played very well over the first 20 minutes. It's worrying that the discrepancy between Iowa's defense when they are focused and when they aren't is so stark, though.

The most encouraging thing about the game was the further development of the starting offensive unit. It's clear now that this unit works much better, offensively at least, when White and Cartwright are in instead of Melsahn Basabe and Eric May. It works because every single member of the unit can, potentially, score from a variety of positions. Double Gatens on the pick and roll? White or McCabe probably set the pick and are going to be open for a three. Man the team up? Cartwright, Gatens, Marble, and McCabe are all very comfortable taking the ball off the dribble, and only White is still a little awkward in that phase of the game. All five players pass well and cut well, something the team exploited a few times in the first half when Cartwright or Marble would back-cut to the rim for a layup. It's a very odd, non-positional sort of offense, sort of like the Dallas Mavericks of last year when they went small (but without the three-point shooting), and it seems to work pretty well.

Of course, defense is the area where this unit is a little lacking. For a while at least, though, they gave a template in this game of how this undersized unit might succeed on defense: taking charges, swiping at the ball when it gets in the post, and relying on the surprisingly good shot-blocking skills of White. It's doubtful that this unit will ever be dominant on defense, but when everyone is focused, they at least can scramble and make things difficult for the offense.

Player of the game should probably go to White, who finished with the well-rounded line of 17 points (on just nine field goal attempts), 9 rebounds, 4 assists, 2 steal and 3 blocks. He really is a fun player to watch, and is proving impressively versatile. He seems to be equally comfortable defending the post, shooting on the perimeter, rolling to the basket on a pick and roll, or getting out on the break. He also displayed some nice passing, dropping it off to Gatens and Cartwright for layups.

Cartwright also had a very solid game, going for 17 points, 7 rebounds and 5 assists. The best number he put up, though, was his one turnover. He's had several games that were otherwise good marred by inexplicable turnovers, usually low-probability bounce passes to a player who wasn't expecting it. On Saturday, there were none of those passes, and he ran the break well and under control. He also seemed to work more off the ball, which helped, I think. He's a very quick player, and has the capacity to get open in the style of a shooting guard off of screens, rather than just penetrating one-on-one.