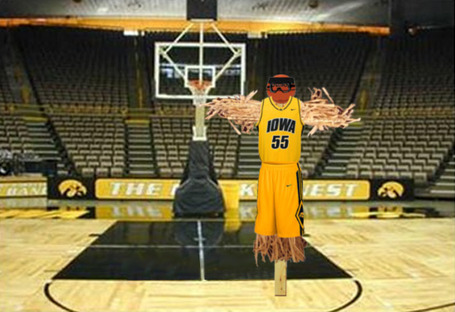 In a shocking revelation today, Iowa men's basketball coach has admitted using a straw-based "center facsimile" in Wednesday's victory over the Minnesota Golden Gophers. McCaffery acknowledged his use of the ploy after eagle-eyed viewers noticed the incongruous site of a tall and intimidating Iowa defender standing firmly in front of the basket.

"What can I say? You got me," said McCaffery. "But you need to understand: we were at our wit's end trying to come up with something that would work on defense."

In recent games the Iowa defense has returned to the bad defensive habits that marked some of their early season performances. Lowly Nebraska scored 48 points on the Hawkeyes in the second half of their victory at Carver-Hawkeye Arena, and #17 Indiana scored 103 points via 28 dunks or layups. McCaffery called his ploy a "last resort".

"We had tried everything: not guarding players, having our defenders switch which players they were not guarding, using a zone defense so that every defender was not guarding a certain area of the court -- you name it, we had tried it, and nothing had worked. So the only thing left was to stuff a jersey full of straw, slap on some rec specs and a headband and hope the other team didn't look at it too closely."

The figure, nicknamed "Hayseed Earl" by the coaches, measures out at an imposing 8'6" and has a wingspan of 9'8". Big Ten Network cameras noted the figure occupying a prominent place near the basket, as well as several Minnesota players seeming to sense the dummy's presence and then giving it a wide berth.

According to McCaffery, the original plan was to use the straw-pivot in addition to the normal starting five, but that proved impractical. "We knew that several of the Gopher players were extremely near-sighted, but it turned out they were still able to distinguish whether there were five or six players on the court. So we played the thing instead of a traditional center." McCaffery described the move as a necessary compromise.

"Ideally we would have liked to have him out along with our current five players. Because, you know, playing defense is much easier with six players than five. But when we were forced to make a decision, the choice was obvious. Our current post players have many advantages over an immobile hay golem, obviously, such as the power of locomotion and ... well, many other qualities I'm sure. But the overwhelming advantage of our straw figure is that he stays put in front of the basket. That and his monstrous size give him the edge over our other options."

The genesis of the origin of the beginning of a plan

According to McCaffery, the idea of a scare-center occurred to him during a recent practice. "I glanced out the window at my car and noticed that there was a flock of birds roosting in the tree above it. Well, I knew what those birds had in mind, so I sent Darius [Stokes] out to stand by the car and wave the birds away for the next few hours. Unfortunately they pecked him up pretty good, and Darius started squawking about 'lawsuit' and 'violation of NCAA rules', so I was forced to throw together a replica of him out of gym socks and spare jerseys." That would have been the end of the story, said McCaffery, but for a serendipitous moment. 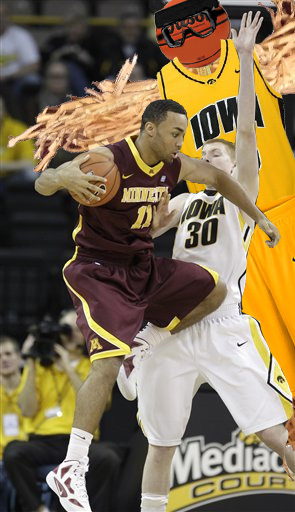 "I was hauling this straw-Darius Stokes through the practice gym on the way to my car when I got a call on my cell phone and had to set the thing down underneath a basket. The team was running a layup drill on that basket at the time, and as soon as I set the straw-Stokes down, I noticed that everybody was pulling up for short jumpers instead of taking it strong to the hoop. The assistant coaches were even asking them to take layups, but the players would just shake their heads and say 'I don't like the look of that basket.' That was the eureka moment for me."

McCaffery then instructed Stokes and the other walk-on players to cease practicing immediately and begin gathering straw from wherever they could. Several hours later, they had collected enough stuffing to expand the dummy to its present size.

The straw man that stirred the drink... and up some controversy

McCaffery stated that he was looking for three things in Wednesday's game, all of which he said his team accomplished: "First, it was imperative that the referees, the opposing coaches, the fans, and the television audience not notice that I had placed a gigantic straw figurine under the basket. That really couldn't be emphasized enough. Now, you all noticed... eventually, but the win is in the record books, so I say mission accomplished. Second, we had to remember to move the straw man when we switched sides in the second half. If we hadn't have done that, then his impact would have been canceled out, obviously. Matt [Gatens] -- and this is so typical of his senior leadership -- alertly noticed that right before the second half and we got the thing moved just in time. And third, we needed to take advantage of our new interior presence and play tough perimeter defense. We cut down the number of layups that the opponent made from the high 20s to something like 10, so I say we did that. We are not a good defensive team right now, but a little discipline and a giant basketball statue made of straw seemed to fix that."

It is unclear whether McCaffery will face any NCAA or Big Ten sanctions for his unconventional approach. Big Ten Conference commissioner Jim Delany did report to USA Today that he had contacted the university's athletic department about the incident. Delany wrote in an unusually candid e-mail, "The conference did communicate its concern with such tactics. We are, after all, committed to our mission of supporting student-athletes, not student-straw effigies. And while it may seem to the casual observer that we manipulate our young charges as if they were soulless straw colossi, this manipulation is merely metaphorical and should not be allowed to spread into the physical realm. Otherwise, where would it end? Would Tom Izzo build a statue out of sticks twelve feet high? Would Thad Matta build a brick wall in front of the basket twenty feet wide? And then how would the SEC respond? You can be sure they would escalate the practice even further, and not necessarily according to the honorable principles of the Big Ten. The conference does not in any way want to initiate a straw arms race with the SEC, and so we have made known Our displeasure with Coach McCaffery's audacious basketball heterodoxy." Iowa Athletic Director Gary noted that he had talked with McCaffery about the situation, and believed the matter to be settled.

"I would describe our talks as productive. We've put the matter behind us, and placed the straw figure in storage." Barta reaffirmed his support for McCaffery, however. "We're 100% behind Fran. And I'll note that he's not the first Iowa coach to use straw-based basketball players at Iowa. Brad Lohaus was 35% straw, and Les Jepsen was the creation of a mad scientist in Bowbells, North Dakota whose life's mission was to animate straw, give it elbows and a really nasty disposition. So we would contest the conference's notion that this is an entirely novel approach."

With the probable absence of the straw man from the line-up, McCaffery is once again faced with the task of improving his foundering defense. When asked to expand on what he thought the root of the team's struggles on the defensive side of the ball was, McCaffery cited a lack of basketball intelligence. "We just play dumb sometimes. Our players will switch on to someone 20 feet from the basket and ignore a man cutting to the rim for a layup, or four guys will all collapse on one player, leaving the rest of the opposing team uncovered. Stuff like that. Let me tell you, I would dance and be merry, life would be a ding-a-derry, if we only had a brain... on defense, that is."