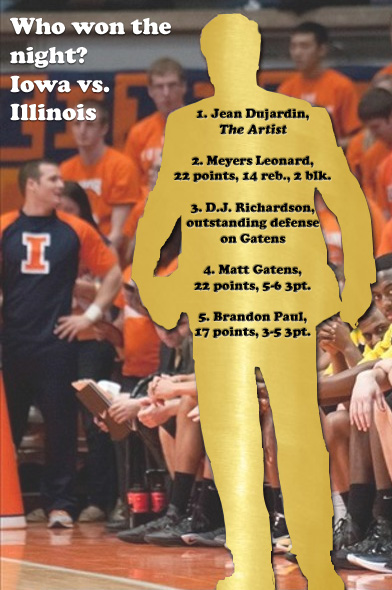 Meyers Leonard. Meyers Leonard. Say it loud and there's music playing, say it soft and it's almost like praying. The man with the most-WASP-y name in the Big Ten* and the face of a 12 year-old completely dominated Iowa yesterday. How do you solve a problem like Meyers Leonard? On offense, on defense, on the boards, Iowa had no answers for a 7'1" player with Leonard's speed and strength. He made his presence felt shortly after coming in: first, he altered a Basabe layup with his size and grabbed the rebound, then he drew a double-team on the offensive end and passed it off for an easy layup, then he erased a sure Basabe dunk, blocked a Bryce Cartwright layup, and forced Matt Gatens to hesitate in the lane and travel. Those last three plays on defense, in particular, seemed to change Iowa's approach to the rest of the game. The Hawks were not nearly as aggressive in the paint from that point on, and their offense suffered as a result.

* Thanks to Ross for this observation. Oddly enough, though, Leonard Meyers would be one of the more Jewish names in the Big Ten.

Winning on the road in the Big Ten is hard, for a variety of reasons, but the plain fact is that a road team has to play several points better than they would at home if they want to have a chance to win. For a team like Iowa, that usually means playing perfectly, and against Illinois, Iowa did not play perfectly. They turned the ball over carelessly too many times, shot an abysmal percentage from the field, and got torched on their full-court press. Despite another outstanding game from Matt Gatens (22 points on just 11 shots, 5-7 from three), the Hawks lost decisively, 65-54.

Which is a shame, because Iowa actually played a very solid defensive game. They held Illinois to an eFG% of just 43.9% and an offensive efficiency of less than a point per possession. And for all the damage Leonard did in the first half (15 points on 4-7 FG, 7-7 FT), Iowa generally did an excellent job of compensating for their lack of size with crisp defensive rotation and a heaping helping of fronting.

No, the loss is not the fault of the team's defense -- offense and offensive rebounding were the culprits here. Iowa started well on offense, scoring five points in the first minute of the game, then went seven minutes before scoring again. The game was marked by long scoring droughts on Iowa's side: six times the Hawks went two minutes or more between scores. The cause of Iowa's struggles was three-fold: 1) Leonard's presence in the paint, 2) turnovers, and 3) very solid perimeter defense by Illinois. To take the last point first, this was partially a case of Iowa getting the sour of home court advantage after tasting only the sweet for the last two games. The refs weren't calling much incidental contact (Illinois got its sixth foul of the game with nine minutes left in the second half), and that meant that Gatens spent the majority of the game with an Illinois player's hand on his jersey. But the Illini also did a very good job of closing out on Gatens on the perimeter and forcing him to put the ball on the court, and credit there goes to two players: D.J. Richardson, for chasing Gatens all game and giving him zero air space, and Leonard, for shutting down the paint and allowing Richardson to pressure with impunity.

It's amazing that Gatens scored 22 points and made five threes considering all the attention that Illinois gave him, but it still wasn't nearly enough. Iowa needed a second player to step up and provide some scoring, but it never happened. At a certain point in the second half, Fran McCaffery seemed to realize that getting Gatens open was a lost cause and ordered Josh Oglesby to do his best Gatens impression. Oglesby made a valiant effort, scoring all nine of his points in the second half and nailing several tough pull up jumpers, but the scoring just wasn't there from the rest of the team: Iowa got just one point from their bench and struggled to score inside, with their front line players shooting a collective 4-16 from the field.

In many ways this was the kind of loss Iowa fans expected from the team going into the year. Not a loss due to shoddy perimeter defense and three-point shots (as so many of Iowa's losses have been), but rather due to a lack of front court size. Leonard and Tyler Griffey formed a brick wall in the paint and deterred Iowa from even attempting forays to the basket, then locked down the rebound when Iowa missed from the perimeter (which was more often than not). And on the offensive end, Leonard and Griffey kept several possessions alive for the Illini by reaching over the heads of Iowa's players and knocking the ball back out to the perimeter. Illinois dominated the defensive and offensive boards and the pair of Leonard and Griffey finished with a combined 10 offensive rebounds.

Despite all that, Iowa still found itself with a shot in this game. They were down just four points with 13 minutes left and by six with three minutes left. Missed shots and turnovers killed any hope for a comeback. Cartwright, in particular, hurt Iowa's momentum with two inexcusable unforced turnovers in the second half. On the first, he tried to hit Aaron White on a court length pass that forced White out of bounds, and on the second, he fired a pass on the break between two men who weren't looking for the ball. He was not seen for the rest of the game, which was telling. Turnovers were a problem all game for the Hawks, though -- Marble had six -- so this wasn't exclusively a Cartwright problem. Those two were just particularly galling because of when they happened and the fact that they were totally unforced.*

* You can usually see the general idea Cartwright is going for on his passes, and almost always it's a really cool idea -- or it would be if it worked -- the execution just isn't there. Cartwright seems to be caught in a typical trap for the struggling player: he makes a mistake, gets benched, then feels the pressure to make up for it by doing something amazing later on. When that fails, he gets benched again, and the cycle continues. This pattern has played out at times with several Iowa players: Cartwright, Melshan Basabe, Eric May, even Andrew Brommer.

Iowa's full-court press also backfired badly in this game. My recollection is that it forced one turnover and led to four Illinois dunks or layups. I could have those totals wrong, but the overall effect of the press was not positive. The problem was that too often the player Iowa chose to trap in the backcourt was Leonard. He simply raised the ball over his head, surveyed the court, and broke the press by himself. He is a tall, tall dude, and Iowa had nobody who could even try to get in his face. It would be interesting to see the numbers on the year, but my guess would be that Iowa's press has been a net negative on the year. Against certain teams and at home it can do wonders, but on the road or against patient teams, it has served more often than not as an injection of instant offense for the opposition.

But all the problems with the press, the offensive struggles, and many of the turnovers had their origin in one guy: Meyers Leonard. Iowa can do a number of things well, but they have no answer for an NBA-ready 7'1" big man. He changed the game in all its aspects -- offense, defense and rebounding -- and allowed his team to play very aggressively on the perimeter. Add in some very physical defense by Illinois and Iowa's meager scoring output is easy to understand. Until Iowa gets some more size or guards who can fight through a good pummeling on the perimeter, they'll be hard-pressed to win many games on the road in the Big Ten.