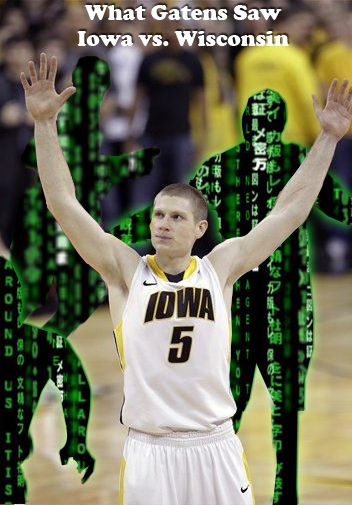 Maybe it was when Matt Gatens hit a jump shot even as a defender knocked him sideways, or when the crowd grew so loud that Devyn Marble was able to sneak up on a Wisconsin ball-handler and pick his pocket, or when Aaron White dunked off of a sweet no-look Marble bounce pass, or when the packed student section began to rock like the sea after a Melsahn Basabe dunk, but at some point, the Iowa/Wisconsin game began to take on the unreal quality of a dream. Gatens couldn't possibly make another three with a hand in his face, could he? He did. Iowa couldn't dunk on Wisconsin again, could they? They did, again and again and again. Carver couldn't be this loud, could it? It was.

It's hard to express it, but for the first 30 minutes of the game, the arena felt like it was under a magic spell -- for both teams. Wisconsin actually played very well, and I'm sure their fans are asking themselves today what else their team could have done better to win this game. Ryan Evans came out and matched Gatens point for point over the first five minutes, keeping the Badgers close, and at various times Josh Gasser, Ben Brust and Rob Wilson all rose to the occasion and scored tough baskets. The Badgers shot 75% from the field in the first ten minutes of the game, made several very difficult jump shots off the dribble, and were on a pace to score 80 points. But somehow Iowa was even hotter. The Hawks made four threes in the first five minutes of the game, Gatens made his first six shots, and Iowa was on a pace to score 96 points after the first 10 minutes.

In many ways the game felt like an announcement: For Gatens, who surely knows that his chances to impress NBA scouts on national television are running out and has embraced a wonderfully effective "carpe diem" attitude by shooting whenever he is even marginally open; for Melsahn Basabe, who has salvaged a disappointing sophomore season by suddenly controlling the paint like Patrick Ewing; for Aaron White, who won the ginger battle decisively over Mike Bruesewitz and already plays like one of the team's smartest players; and for the program, which was clearly going all out to pack the house and remind the country that Iowa basketball was back.

It felt like a plan coming together. Iowa basketball was in the depths just a few years ago, the crowds were shrinking, the play was slow, and the losses were numerous. The general idea with the hire of Fran McCaffery seemed to be as follows:

Okay, so maybe that last step wasn't there, but otherwise, last night felt like the realization of the general idea that Iowa has been aiming for. Iowa played with passion, energy, and speed; they forced turnovers and blocked shots, they got out on the break, and they switched up defenses constantly. Here's what McCaffery said at his first press conference:

That was the first half in a nutshell. Wisconsin committed an unusually high number of turnovers in the first half -- 11 -- and Iowa's pressure deserves a lot of the credit. The crowd also deserves credit. Noise caused at least three turnovers: two 35-second violations where Wisconsin didn't seem to realize that the clock was running down, and the aforementioned Marble steal, which led to an awesome Basabe dunk and made the crowd go basically batshit crazy.

Of course, the key ingredient that started everything going was Gatens. He was simply unbelievable. He made shot after shot in the teeth of very tight defense. He came off of screens and made shots, he made shots off the dribble, he made shots when he was fouled. I'm sure Bo Ryan was getting a little frustrated, because his defenders were actually doing a fine job. They were on Gatens, they were physical with him, they got a hand in his face. He just elevated and made shots right over them. His performance reminded me a lot of J.J. Redick's play at Duke a few years ago, in the sense that both Gatens and Redick needed almost no time or space to get off a shot and seemed to have unlimited range. I've been fairly skeptical that Gatens could make it in the NBA, but if he can continue to shoot threes off of screens as well as he has the last few games, then he just might find a niche.

As euphoric as the first 30 minutes were, the last 10 were, for me at least, filled with white-knuckle terror. Iowa adopted the "run the clock down to five and then throw up a shot" offense, with predictably miserable results, and the Badgers slowly chipped away at the lead. A few head-scratching calls aided Wisconsin in their comeback (no call when they push Aaron White into the bench? A five-second call on Marble?), and Iowa needed clutch free throws by Marble and Gatens to finally put a stake in the Badgers. Then the students, who had begun to gather on the sidelines in the last minute, poured onto the court and hoisted Gatens and Marble on their shoulders. It's hard to be objective about it, but it was pretty moving to see that. It was just one game and one win, but the ecstatic reaction of the fans felt like a collective expression of joy that Iowa might just matter at basketball going forward.