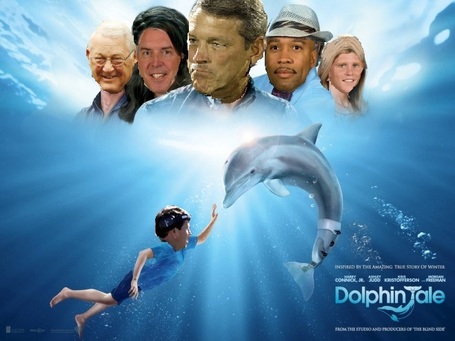 INT: The Iowa Football Offices, a week ago...

We need to talk, Kirk.

I already told you, we can't make an offensive entire formation out of end around plays.

(whispers) Although I still think you're wrong...

/hands Ferentz a piece of paper

I'm handing in my letter of resignation.

Oh god. This isn't going to be like that time you wanted to be an astronaut, is it?

Man's destiny is in the stars, Kirk!

Or like the time you wanted to be a rodeo clown?

I would have been great at it!

Or that time you wanted to dig a hole to the center of the earth to find the lost world?

It would have been historic!

Or that time you wanted to quit during Insight Bowl practice and look for El Dorado?

We were so close! I just know it!

I make four million dollars a year, Ken. If you really want a solid gold toilet, I'll buy one for you.

Whatever. So what is it this time, Ken?

I need to go to Miami, Kirk.

I need to help the dolphins.

They need my help.

Well, they fired Cam Tony Sparano and I'm pretty sure they're gonna tell Chad Henne to pack his bags, so they're on the right track. I think Joe's going to do a great job down there.

No, not the Dolphins, Kirk. The dolphins.

The dolphins are hurting, Kirk! I was watching TV last night and --

-- and the missus came across this program and I don't mind telling you that it was the saddest thing I'd ever seen.

Two guys rescued a dolphin, but his tail was all hurt, so they had to amputate it! It was awful!

Can you imagine a dolphin with no tail? Oh, it was so sad. The missus and I were just bawling.

Luckily, this nice doctor took the dolphin to another doctor and they put a prosthetic tail on the dolphin. It was a miracle!

But what if that dolphin wasn't the only one out there like that, Kirk? I just couldn't bear the thought of some other dolphins out there, writhing in pain with no tails!

So do you see? Do you understand why I have to go?

Ken, this is the dumbest idea you've ever had.

And that's saying an awful lot, considering I once let you take two weeks off in the summer to look for Bigfoot.

I thought I had good intel!

From who, Santa Claus? You went looking for him in the Loess Hills.

Have you been to western Iowa? It was plausible!

Anyway, I need to do this, Kirk. The dolphins need me!

Ken, you don't know the first thing about marine biology, anymore than you knew a thing about astronauts, rodeo clowns, or underground exploration.

/pours another glass of Templeton Rye

Look, a dolphin called me! I heard his cry for help!

Here, listen to the voicemail!

/listens to the voicemail

Ken, this is insane. Dolphins can't use phones.

How do you know that? Dolphins are some of the smartest mammals on the planet!

They don't have any fingers.

Their noses are incredibly sensitive! And what about touch screen phones, huh? Huh?

This is still insane.

Maybe you're insane! You keep doing the same thing again and again, which is the definition of insanity!

First of all, you've completely mangled that expression. Second of all, it has literally no relevance to this discussion at all.

I guarantee you that a dolphin did not acquire a phone, find your telephone number, call you up, and then leave you a voice mail.

Ken, why would a dolphin call you? Like I already said, you don't know anything about marine biology. You're an offensive coordinator. You coach football.

That was the old Ken O'Keefe! The new one is going to save the dolphins, Kirk!

This is still completely insane.

/marches out of Ferentz's office

Norm will never believe this.

/glances at O'Keefe's phone in his hand

I'm Kirk Ferentz, head coach of the Iowa football team. Er, who are you?

Oh hey, coach. How's it flappin'? This is B-Marsh.

Brandon Marshall, fool. About to be the best receiver in the NFL again.

Oh. I coach college ball, so I don't spend a lot of time following the NFL...

Pfft. Your loss, man. So why're you ringing up B-Marsh anyway?

Uh, well, it looks like someone from this number called my offensive coordinator and pretended to be a dolphin.

Aw man, I remember that now. You heard of turtlecalls, man?

Guess not. Me and Davone got the idea to make like a spinoff of that idea. We call 'em dolphincalls.

And I had a one-on-one interview with Coach Joe the other day where he mentioned how much of an inspiration Kenny O'Keefe had been for him when he was at Iowa. He gave me his number, I don't really know why.

But me and Davone were bored as hell last night so we just said what the hell, let's give him a dolphincall. It was so damn funny. Until he started crying. That was kinda weird.

Well, today Ken quit because he said a dolphin called him and told him it needed help.