At most schools, an open coordinator position wouldn't be cause for serious contemplation. Coordinators come and go, in most circumstances. Iowa football isn't most schools, though; the program hasn't hired a new coordinator in thirteen years, and a full-on head coaching search looks to be years away. Offensive Coordinator LET'S TALK ABOUT IT.

In retrospect, we should have seen it coming.

Just one year removed from a spot in the National Championship Game, Texas went 5-7 in 2010, with a horrendous 2-6 record in the Big XII. The Longhorns had lost seven of its last ten games and managed a meager 15.6 points per game in its contests against teams not named Florida Atlantic, Wyoming, or Rice. It was the last straw for Mack Brown; after thirteen years of gainful employment, offensive coordinator Greg Davis resigned (with a helpful push from Brown). Soon after Davis' resignation, Peter Bean of Burnt Orange Nation emailed me to ask about Ferentz's tendency toward continuity and how Iowa fans felt about their own Greg Davis, the now-departed Ken O'Keefe. I don't remember my response; I just remember drunkenly emailing Barking Carnival ten months later, after Iowa's offense had wet the bed in Happy Valley, and asking how they got their mutiny started. 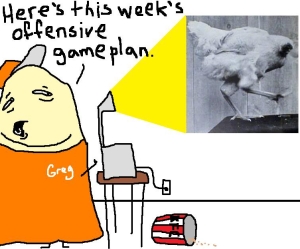 We really should have seen this coming. The similarities are abundant enough to make it a bit eerie: A thirteen-year coordinator with a solid resume, constantly under pressure from the fan base. A solid developer of talent at quarterback -- under his guidance, UT churned out Major Applewhite, Chris Simms, Vince Young, and Colt McCoy -- yet he was constantly criticized for his playcalling and in-game decisionmaking. While he embraced some of the spread passing game that enveloped the Big XII, Texas always remained steadfastly pro-style and conservative, especially against top-shelf opposition. Greg Davis was essentially the Texas-sized Ken O'Keefe, ostensibly more successful on the stat sheet and in the standings but rarely exceptional and constantly lampooned by a fan base that had seen more than enough to make its judgment.

We'll start from the beginning: Davis, 61, played quarterback at McNeese State in the early 1970s. He started by doing what almost every coach in the 1970s did in Texas: Coaching high school ball for five years before catching on as quarterbacks coach at Texas A&M, first for Tom Wilson and then Jackie Sherrill (for the Ferentz kremlinologists out there, this is your loose connection to the Ghost of Ferentz Past). In 1985, he moved to Tulane to coach wide receivers for a former Oklahoma offensive coordinator and fast-rising first-time Division I-A head coach Mack Brown. He spent three years under Brown in New Orleans; they inexplicably got the Green Wave to the 1987 Independence Bowl, Brown took advantage of the opportunity and moved to Chapel Hill, and Davis inherited the head coach position. He went 14-31 in four seasons before being cut loose. Davis spent two years as coordinator at Arkansas, first under Joe Kines (YAW YAW INSIDE TROUT YAW) and then the godlike Danny Ford, then another two under Ray Goff at Georgia.

Let's stop the story here for a second. By now, Greg Davis had been a position coach or offensive coordinator at a BCS-level program for eleven seasons (we won't count Tulane, the coaching graveyard that it is). In those eleven seasons, his teams were 61-58-4 and went to exactly one bowl game (Georgia, at 6-6, somehow made the 1995 Peach Bowl; the administration thanked Ray Goff by firing him and the rest of the staff, including Davis). Not exactly the exemplary record you'd expect from a seasoned coach like that.

Nevertheless, he made an impression on Mack Brown. Following his dismissal at Georgia, Davis caught on with Brown at North Carolina, where he settled in as offensive coordinator. Everything finally clicked: The Tar Heels went 21-3 in his two seasons on the job, finishing in the top 15 both years, winning a pair of Gator Bowls, and scoring a decent number of points in the process. After ten years in Chapel Hill, Brown was a hot commodity, and when Texas came calling, he took Davis along with him. You know where the story goes from here: After a decade of abject mediocrity, Texas took off. They scored points by the bushel. The cranked out halfbacks and quarterbacks, and they landed a boatload of five-star prospects every winter to reload. The Longhorns went a perfect 13-0 and won the national championship in 2005; in their first eight years at UT, Brown and Davis were now a staggering 83-19, as successful through eight seasons as Darrell Royal (and they named the stadium after Darrell Royal). From 2001-2009, Texas was a machine, winning at least ten games a season in nine straight seasons -- prior to Brown's arrival, UT had never won double-digit games in three seasons in a row -- with the offense leading the way. Before the dismal 2010 Texas offense, the 'Horns had been in the Big XII's top five scoring offenses every year he'd been at the helm, and had been in the top half of the conference in total offense in every year but one. Where they got that offense largely varied based on personnel; Texas threw the ball a lot in the early seasons, finishing in the conference's top four passing offenses every season from 1998 through 2002. Vince Young brought the passing game to a halt for a couple of seasons (though it was the one time UT was at or near the top of the conference in rushing offense for a sustained period of time; Texas finished third in rushing offense in 2003, first in 2004, first in 2005, and in the top four exactly one other time when Young wasn't taking the snaps).

It wasn't all wine and roses, though. The knock on Davis' tenure up to that point had been Texas' inability to score in big games, in particular against Oklahoma. While the Longhorns had run up huge scorelines on the likes of Rice and Tulane, they had grossly underperformed against OU ever since Bob Stoops got on his feet: From 2000-2004, Texas averaged just 10.8 points per game and lost five straight to the Sooners. Since 2005, Texas earned a split in the series and (at least up until this year) held its own with OU on both sides of the football. The criticism never really escaped Davis, though, and began expanding to other areas. Take, for instance, this well-reasoned discussion of Davis' tenure from days after he resigned (stop when it starts to sound familiar):

Here is what I will thank Greg Davis for: Twelve years of general success. Building an offense around Vince Young and being humble enough to trust VY to lead us to win. Building an offense around Colt McCoy in 2008 that featured Cosby, Shipley, and for a short period of time, Blaine Irby, where Colt McCoy lit the college football world on fire and should have won the Heisman. That 2008 OU game, maybe Davis' best called game, where we pantsed the #1 ranked Sooners and went on a run that, while came up short, made that 2008 team a fan favorite. Also, as a quarterbacks coach, Davis helped in the development of VY, Colt, and Major (and yes, Chris Simms), and he deserves some credit for that.

There are, obviously, many things to criticize Greg Davis for. He had a maddening tendency to be too complicated when it was time to be simple and too simple when we needed some wrinkles. He failed to develop a consistent running scheme for the past several years and went away from the spread option attack of Vince Young that helped us win a national title. He often failed to attack opponents' weak points specifically, opting to believe (I presume, anyway) that simply executing the Texas offense in a general manner would work simply because We're Texas and they're not. And, most famously, his random screen calls left much to be desired. Nonetheless, he had his successes here, and no one can take that away from him.

Was Greg Davis the best OC money could buy at Texas? I don't think so, and there have been enough episodes where something he did made me want to ram my head against a wall such that I don't regard him THAT highly. However, I refuse to look back at his 12 years and call it a complete failure or that he was simply a lucky bystander that benefited from and even impeded the talent of great recruits. Could we have won more games and more titles with a better offensive coordinator? Perhaps. Personally, I think we could have at least a couple more Big 12 titles (2001 and 2006 come to mind). That said, those Texas fans pretending we'd have a 4 national titles and 12 Big 12 titles with another coordinator are fooling themselves. Greg Davis wasn't quite that bad, and there is no guarantee another OC would have been demonstrably better during those years.

From an outside observer, Davis looks like both the beneficiary of a perfect situation and the victim of his head coach's own success. There is no denying that Davis had obscene amounts of high school talent delivered to his doorstep: From 2002 through his resignation in 2010, Davis and his staff recruited 92 offensive players to Texas; 59 of those players were given 4 or 5 stars by Rivals, and the average star rating of a Texas offensive players over that period was a tick over 3.7 (by contrast, Iowa is generally in the 2.8 neighborhood). But Davis, like KOK, served at the pleasure of a head coach who was (and is) largely beyond reproach from a rabid fanbase. The tongue-biting criticism of Mack Brown had to go somewhere when Texas lost to Oklahoma or underperformed its usual lofty expectations, and that criticism largely fell on the silent partner running an offense that never seemed to get out of its own way without a Heisman contender at quarterback. Davis took it largely in stride and, when it came time to make the ultimate sacrifice for his friend and supervisor, he fell on his sword like the good soldier he is.

There are any number of reasons why Ferentz would look to Davis as his next offensive coordinator (and why we firmly believe he'll be named in the next couple of days). The stats are impressive if void of context. The track record of developing quarterbacks is virtually unparalleled, even if those quarterbacks came with a constellation of recruiting stars next to their names. The resume is full of big football programs, if lacking the sort of across-the-board winning we'd hope to see. The recruiting benefits of a coordinator who grew up, played college ball, and spent the vast majority of his adult life coaching in Texas and Louisiana are obvious, especially for a staff that just lost one of its top connections into Pennsylvania and Ohio. But the way he's handled himself as the shield for Mack Brown for all those years, just as O'Keefe soaked up so much criticism that would otherwise be directed at Ferentz without a cross word, is why he's the inevitable choice. In retrospect, it makes too much sense.

Every possible sign indicates Greg Davis is the next offensive coordinator. And we really should have seen this coming.