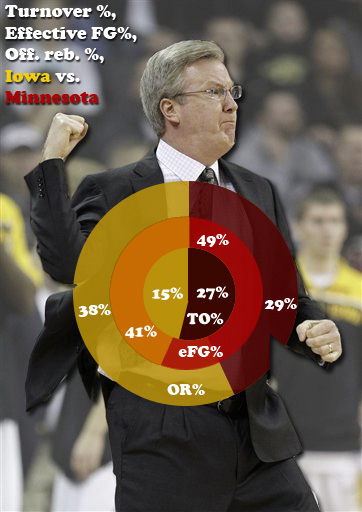 In many ways the game Wednesday night was the polar opposite of several other games the Hawks have played recently:

The beginning and the end of the game was excellent, but there was an atrocious performance smuggled in there for about 25 minutes in between. Iowa surged out to a 15-3 lead in the first eight minutes, then relaxed, gave up a series of three-point plays and regular threes, and found themselves down 27-24 at half. The second half looked to be no better, as the no-movement offense set in. You can see how the Hawks' performance plateaued at the end of the first and beginning of the second half: 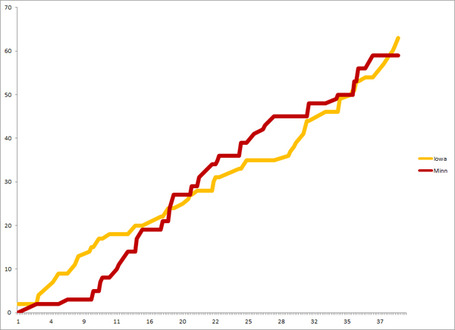 At one point it looked like Minnesota was on the verge of blowing Iowa out of the game, going up 10 points with 12 minutes left. To the Hawks' credit, they didn't fold and kept chipping away at the lead. Via free throws, two Gatens threes, a Gatens layup off his very heads-up steal, and a tough layup in the open court by Bryce Cartwright, the Hawks put themselves in striking distance, down five with three and a half minutes left. And then Devyn Marble finished the game with four straight excellent plays: he knocked down a three in transition to cut the lead to two, fought through a screen to contest a corner three, which Andre Hollins missed, then did this:

That tied the game, and after two free throws by Cartwright and a missed jumper by Welch, Marble ran the clock down to about 15 seconds, then drove to the basket, narrowly avoided a charge, and slipped the pass to Gatens for the clinching layup. Minnesota probably regrets allowing Iowa to run the clock down like they did. Ideally Iowa would have missed a shot and given Minnesota the ball with a chance to tie or win, but that was the only way things could have gone well for the Gophers. If they had chosen to foul, on the other hand, the number of ways the game could have ended in their favor would have increased significantly (especially considering Iowa's poor foul shooting).