If you missed yesterday, you missed a lot. Well, not really, just a whole lot of nothing. But it's something? Marc Morehouse has the story on his On Iowa Blog. Rodney Coe, if you don't recall, was a four-star (Rivals) running back recruit that signed with the 2011 class but went to Iowa Western Community College to get a two-year degree. It was assumed that after receiving an Associates Degree at IWCC Coe would then again commit to Iowa and all would be well.

Not so fast, Coe took to his Twitter account and hell broke loose. For the rest, I'll let the tweets tell the story. 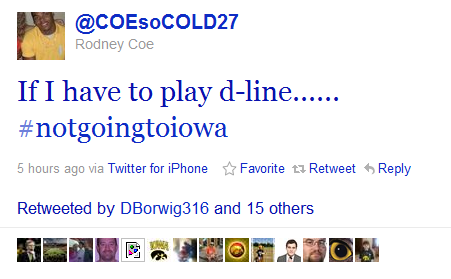 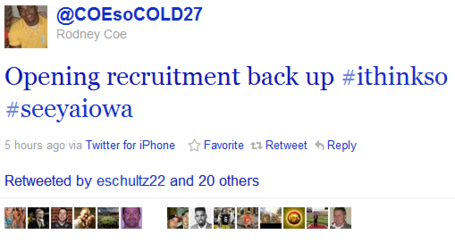 As you can see Rodney's declaration via Twitter was retweeted around and February 13th became the dawn of the Coepocalypse. Fans of Iowa began a barrage of both negative and postitive reactions. Twitter user Drewskie33 said Coe "sounds like a real asshole." Other Twitterers, like beejx, told Coe he'd "love to see you in a Hawkeye uniform." It was the negative comments that stole most of the show. 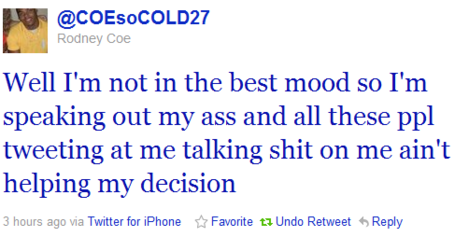 As some of the real ugly stuff started to fly Hawkeye Insider's Twitter account (note:Rob Howe is not the lone user behind this account) decided to retweet those messages of poor taste. Here is their explanation:

The retweets confused some of their 5,906 followers and the vitriol turned back towards Hawkeye Insider. Even former Hawkeye Adrian Clayborn got into the debate and warned,

Of course you don't give used socks as a gift. Especially a Valentine's Day gift. What's the matter with you?

Later, things cooled down. Howe tweeted to Clayborn he was "kidding."

After hours of this back-and-forth on Twitter Hawkeye Insider offered Coe an apology and decided to rethink the "policy."

Coe also admitted that Iowa isn't completely out of the picture. It should be obvious that he's just a confused kid using an Internet outlet to let off some steam. He's declared himself "done with all the negative tweets towards me" and also says he just "wants a chance to prove himself." Prove himself, of course, meaning at the running back position.

In Howe's case, perhaps he let some of the ugly side of social media get to him. I think we can all agree that calling prospective Hawkeye athletes "asshole" or fill-in-the-blank nastiness is uncalled for. While Hawkeye Insider's tweets are prominent in this post he's not the bad guy here. Did HI get sucked in and get too involved? Yes. But why did the Internet need a hero? Because people feel compelled to send terrible messages to athletes via social media because he/she didn't choose their favorite team and he/she decided to pursue an athletic career elsewhere. C'mon people. We're better than that.

Hoops. Scott Dochterman, of the Cedar Rapids Gazette, is breaking down the Big Ten men's hoops race and has NCAA predictions on his blog. Doc writes that if you look at the RPI and history, the league could land seven teams in this year's NCAA tournament. Some projections have as many as eight. There are five, according to Dochterman, that could be considered a lock: Ohio State, Michigan State, Wisconsin, Michigan and Indiana. On the bubble: Illinois, Purdue, Minnesota and Northwestern.

The Hawkeyes sit at 13-12 on the season and 5-7 in Big Ten play. Iowa's current RPI is #130, second lowest in the league and one spot ahead of Penn State. The Hawks finish Big Ten play with a trip to Penn State, host Indiana and Wisconsin at home, a trip to Illinois and then finish with two home games with Nebraska and Northwestern. A .500 or better regular season record and Big Ten record is possible for Iowa. A trip to the NCAA tournament is out of the picture, unless they can win the Big Ten tournament. Possibly an NIT berth is still in the mix and that would be an accomplishment for Fran McCaffery and his staff in their second season at Iowa.