BHGP Has Fun With Sponsorship

Share All sharing options for: BHGP Has Fun With Sponsorship

It began, as many ideas (good and bad) on this site have begun, with a late-night Google chat session: 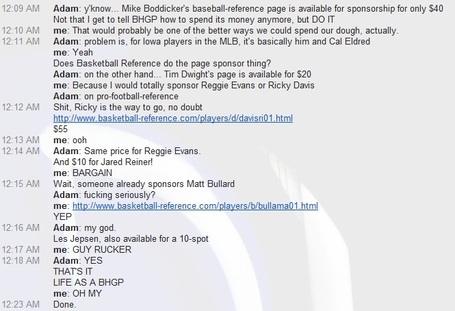 So now everyone who researches Guy Rucker's short but sweet NBA career will get an bonus burst of BHGP. We expect this to drive roughly... tens of new pageviews to the site. INTERWEBZ DOMINANCE: WE HAZ IT.

(And for the record, I totally would have gone for Chris Kingsbury, since he really is the patron saint of BHGP in so many ways, but alas -- he didn't have an NBA career at all. Probably because the NBA is FULL OF HATERS.)