It's Not Plagiarism If You Link To It: A Too Early Look Ahead At Iowa Football Recruiting For 2013

Share All sharing options for: It's Not Plagiarism If You Link To It: A Too Early Look Ahead At Iowa Football Recruiting For 2013

"nothing has changed as much as the pace of recruiting. It continues to really accelerate. I don't see it ending."

"We were half to two-thirds done with the [2011] class. I got 60 juniors there. And I'm recruiting two or three kids who were eligible for the [NFL] draft to stay. I got two or three balls in the air, and I'm [saying to] the coaches on my staff, 'What the hell is going on?'"

Per 24/7 Sports (Voice of the Hawkeyes), Iowa has already offered 32 juniors a scholarship for football. This isn't uncommon for Iowa as the coaching staff needs to offer early and offers over 100 high school prospects each recruiting year. Not all of these recruits were at Iowa's junior day as several in-state prospects and recruits yet to receive and offer were present.

According to Iowa's latest football roster, Iowa has 16 players on scholarship that will enter their senior season. The positions suffering the biggest losses are quarterback (2), wide receiver (2), offensive line (3), defensive tackle (2), and the defensive backfield (4). In addition to scholarship players Iowa will also lose Tom Donatell (LB) and Zach Derby (TE); Both played significant snaps in 2011. That's 18 for a recruiting class, work in some attrition and the number is around 20 for the 2013 class size.

So, that's Iowa and Illinois. For the rest of the prospects I'll list the name (with Rivals profile), position, location, and YouTubes:

Just because Iowa has offered doesn't mean they have a chance. At this time last year Iowa had offers out to Dorial Green-Beckham, Noah Spence, Ondre Pipkins and more Top 100 recruits. The Hawkeyes were eliminated early in the process by those top rated prospects but did land Top 250 players Ryan Ward, Jaleel Johnson and Faith Ekakitie.

That's certainly not a complete list, but plenty of prospects there to creep you the hell out. Iowa has already started working on the class of 2014. EdgyTim reports that current Illinois sophomore Brian Allen already holds an Iowa offer. Ross Pierschbacher, a Cedar Falls offensive tackle has an offer too.

After the jump, Hawkeye sports round-up and more links.

What's $2100 get you these days? It gets you a Fran McCaffrey autographed chair. Not just any chair, a chair from Michigan State (it's not clear if this is the exact chair McCaffery tossed, doubt it). Iowa baseball held a steak fry and auction last night, this was awarded to a winning bid of $2100. 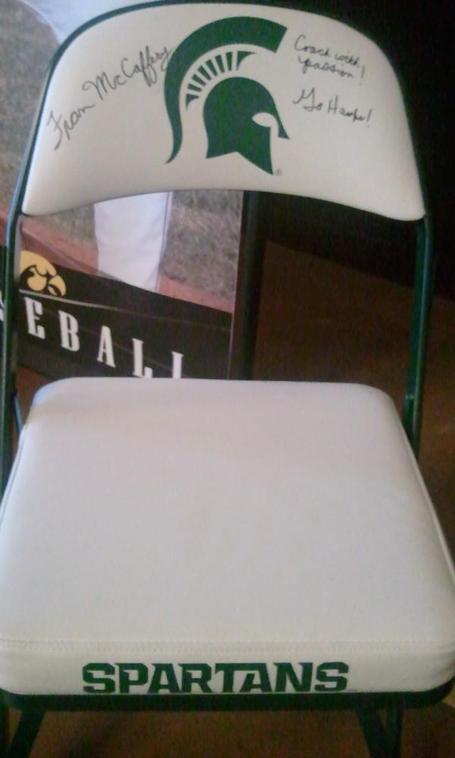