It's Not Plagiarism If You Link To It: Gary Barta Has Some Answers

Share All sharing options for: It's Not Plagiarism If You Link To It: Gary Barta Has Some Answers

Barta says next week is when interviews begin for Iowa's openings on the football coaching staff. The lone opening on the defensive side is linebacker coach and LeVar Woods is thought to be the leader in the clubhouse. An official announcement naming a new LB coach could come next week. The openings on the offensive side could take a little longer.

"[Iowa coach Kirk Ferentz] decided his best option was to promote on the defensive coordinator [Phil Parker]," Barta said. "Now that's done, he [Ferentz] turns his attention to the two assistant coaches first, not the offensive coordinator. We have a process on campus, and football follows that process just like everyone else does."

About the length of time, Barta adds,

"Whether it's hiring a coach or an administrator, we have a process of approval we have to go through," Barta said. "We have to advertise the position a certain number of days and we work with the campus human resources and have done that throughout."

Marc Morehouse points out that the process is same whether Iowa hires from within or from outside the program.

Some other tidbits from Morehouse's piece:

Barta wouldn't disclose why McCall was suspended but added,

"We do not kick off or suspend student-athletes in any sport for a Facebook posting or a Twitter," Barta said. "We have conversations with them about it."

Iowa added that the Athletic Department has "social media guidelines" and that student athlete activity is monitored. Barta concluded with,

"Since I've been here, we have not removed someone from the athletic department or from a team for something they said in social media."

Sally Mason says that Iowa isn't "hiding behind anything." Marcus Coker, like McCall, was suspended and decided to transfer from Iowa. Mason and Iowa officials will not release information about the investigation regarding Coker and cites the Family Educational Rights and Privacy Act (FERPA). Mason adds,

"One of the things we pride ourselves on is that students have a right to privacy,"

releasing student information protected by FERPA could result in the school losing all of its federal funding - about $400million.

After the jump, hoops and more links. 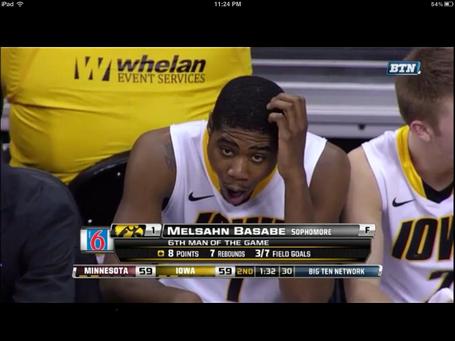 Well, another craptacular performance on the road for the Iowa Men's basketball team is in the books. Northwestern couldn't miss from beyond the arc, same story, different day. The final was Northwester 83, Iowa 64. Aaron White turned in his second double-double of his career finishing with 17 points and 12 rebounds.

The Hawkeye ladie's hoops team got it done for their fourth win in a row. Iowa defeated Minnesota 75-58 in Carver last night. Morgan Johnson poured in 23 points and joined Iowa's 1,000 career points club.

Iowa announced an increase in football ticket prices for 2012. The increase to general public season ticket prices is $2 per game ($388 per ticket). Student ticket prices remain the same as last season. Each game is individually priced, for the per game breakdown read here. Renewal applications begin in March, single game tickets go on sale in June.