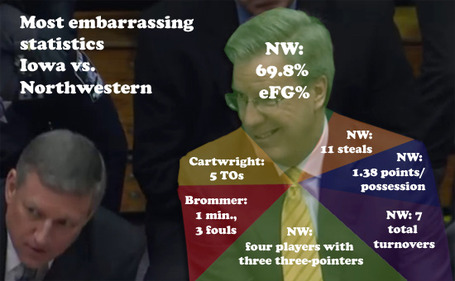 The game in brief: Iowa got absolutely murdered, giving up 83 points in a relatively slow 60-possession game, allowing 13 three-pointers and an almost unheard of 70% effective field goal percentage while turning the ball over one out of every three possessions. And all this to a team that only played six players significant minutes. This was Iowa's worst defensive performance of the year in terms of points per possession; worse than Indiana, worse than Michigan State, worse than Creighton. The only bright spots were that Aaron White played another outstanding all-around game, scoring 17 points on just 10 shots and grabbing 12 rebounds, that Matt Gatens had a good shooting game, and that the team as a whole actually shot very well, finishing with a 58.9% eFG%. In a normal game, that kind of shooting would have been more than enough to win, but this was not a normal game.

Northwestern is basically Iowa's kryptonite, an excellent three-point shooting team that spreads the floor, passes intelligently, and moves constantly. They had Iowa both coming and going, generating excellent spacing on the perimeter and then cutting to the basket whenever Iowa overplayed. MVP of the game would probably go to the Wildcats' impressive freshman Dave Sobolewski, who took advantage of the clean looks he was getting and finished with 23 points on just eight shots and put up an astounding 106% eFG% thanks to 3-3 on threes and 4-5 on twos. But really you could give the award to any one of the Wildcat starters. They are a very good shooting team, and their offense worked like a machine to generate open looks. Four players finished with three three-pointers, and 22 of their 27 field goals were assisted. That's mighty impressive.

It was a blood-bath, and most Iowa fans were probably prepared for that (although perhaps not to that insane degree). Northwestern is a very solid team, especially with the addition of Sobolewski. Looking at their schedule, they only have two losses that could really be described as "bad": their 23-point defeat at Minnesota and their 20-point defeat at Wisconsin. Other than that, they've lost to #8 Baylor, #21 Creighton, #2 Ohio State, and then a trio of very close games (they lost to Illinois, Michigan and Purdue by a combined five points). It may be of comfort for Iowa fans to know that this Northwestern team is truly an elite offensive unit: 10th in the country in Ken Pomeroy's offensive efficiency rankings. If the game felt similar to the Creighton, Indiana or Michigan State games, it might be because those are all elite offensive teams (#6, #3 and #17 in KenPom's offensive efficiency ratings).

The only really surprising thing was how much Iowa struggled against Northwestern's 1-3-1 zone. Bryce Cartwright really seemed flustered by the zone, committing five turnovers and struggling to make good decisions all night. Cartwright does best when he can use his speed to get around defenders, but Northwestern's zone negated that strength. He seemed to want to dribble through the zone, when the best approach seemed to be passing quickly around the zone. To be fair to him, though, his small stature made it difficult for him to throw passes over the defenders at the top of the zone, making dribbling through it his best option. The Hawks shot well when they managed to get shots off, but the fact that Northwestern forced them into their highest turnover/possession number of the season meant that they had fewer chances to shoot than they should have.

But enough about this game. I would like to zoom out and look at the question of what, exactly, makes Iowa so prone to these defensive meltdowns. The topic has been on my mind ever since someone brought up the question in the comments about what kind of team gave Iowa the most trouble. The commenter (whose name I apologize for forgetting) suggested that it was teams with dominant centers. My initial reaction was that this wasn't quite right: Ohio State and Michigan State both had quality big men and gave Iowa trouble, but they give everyone trouble. My impression was that Iowa struggled most against teams with excellent three-point shooting, but I wasn't sure, so I decided to do some research.

My basic approach was as follows: calculate the points/possession differential* in each game, then compare that to a variety of team and opponent statistics to see what factors correlate the most with wins and losses. This isn't a conclusive proof of what causes Iowa to win or lose (correlation is not causation and all that), but it does at least give us a few suggestions.

So what we are looking at are comparisons like the following: 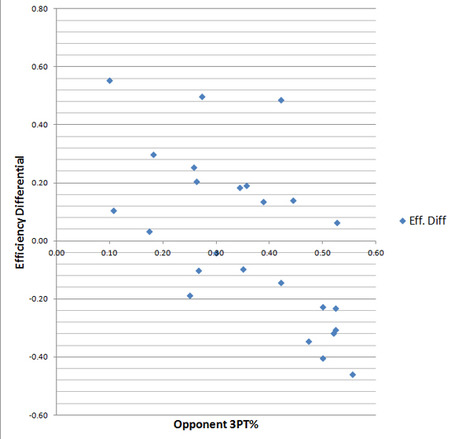 It looks like there's a fairly strong correlation between efficiency differential (on the y-axis) and opponent thee-point shooting (on the x-axis), and it turns out there is: the two statistics have a correlation coefficient of -.62 over the course of the season. A perfect correlation, where the two statistics were related in some exact linear way, would have a coefficient of 1 (or -1), so -.62 represents a fairly strong relationship. Not perfect, but it appears that the better Iowa's opponents shoots from three, the lower the scoring differential. I didn't have time to put together graphs for all the statistics, but the following table lists the correlation coefficients for a variety of tempo-free statistics for Iowa and their opponents for their games so far this year:

You can see some pretty predictable correlations, at least in terms of direction: the better Iowa shoots (eFG%), the higher the efficiency differential from Iowa's point of view, and vice-versa for their opponents; the better Iowa does on the offensive glass (OR%), the better they do in the game, and the more they turn the ball over (TO%), the worse they do. And so on. But what's interesting is the strength of the relationships. The two statistics most strongly correlated with Iowa's efficiency differential are opponent's effective field goal percentage and opponent's three-point percentage. The relationships are much stronger than that of the various rebounding statistics, block statistics, or even Iowa's own shooting.

It isn't conclusive, but it suggests that my intuitions were correct: Iowa struggles with teams that shoot well, especially from the outside, more than they struggle against teams that rebound well (i.e. teams with strong interior play). It's possible, of course, that opponents shoot well from outside because they have strong interior play, but my impression is that this hasn't been the case. Iowa has had trouble with a few interior players (e.g. Jared Sullinger, Cody Zeller, that guy from Campbell), but those were all games where opponents didn't shoot the three particularly well (Campbell made four threes, Ohio State made eight, Indiana made four). And they arguably have played their best against a team that is very strong inside but weak from the perimeter: Minnesota. Their troubles seem to revolve around teams that can shoot accurately from deep. Iowa just has no idea how to defend them.

Earlier in the year, my theory about Iowa's poor defense was that their lack of interior strength forced them to help more to the interior and thus left the perimeter exposed, but as the season has gone on, that just hasn't seemed to fit the facts. Why did teams not post up against Iowa more, why did they take so few mid-range shots? Then it hit me: it's about the perimeter, it's always been about the perimeter. Iowa's problem is not that they can't defend the post; they're actually not terrible at that. Zach McCabe is a very strong interior defender, Melsahn Basabe is a decent shot-blocker, and Andrew Brommer and Devon Archie can both provide some useful minutes if (and only if) they are matched up against true post players. But on the perimeter, Iowa is filled with very weak defenders. And it all comes down, I think, to two things: short arms and slow feet. I haven't done any measurements, but my impression is that almost all Iowa's perimeter defenders, save for Devyn Marble and Aaron White, have short arms: McCabe, Gatens, Cartwright, Oglesby, May. That means it is very difficult for them to contest shots in any meaningful way without getting very tight on their men. If they do go close enough, they leave themselves open to easy drives to the basket. Combine that with some slow feet (I'm mainly thinking McCabe here, but even Gatens, May and Oglesby don't have the best lateral quickness), and you can see why it's difficult for Iowa to contest shots.
This seems to fit with what I've seen. Many times Iowa seems to be in good position to contest three-pointers, but their contests just seem to have no effect. My theory is that Iowa manages to get their bodies close to shooters, but their short arms don't get anywhere near enough to actually alter shots. This kind of physical measurement-as-destiny argument is, to be sure, a little simplistic, but I think it explains why Iowa seemingly gets torched again and again by three-point shooting, even by teams that aren't usually very good at three-point shooting. Most college players can shoot very well when they have clear looks at the basket, and Iowa seems to specialize in providing unobstructed views.
This theory also explains why Iowa struggled so mightily against Northwestern. The Wildcats do an excellent job of spacing teams out and generating good looks from the perimeter. Without outstanding length and excellent speed to shrink the court and alter some of those shots, any defense is going to struggle to limit a squad with four (and sometimes five) legitimate three-point threats on the court at any time. Note that the only teams that really crushed Northwestern are teams with multiple long defenders: Baylor, Ohio State, and Minnesota.
Anyway, that's my theory for Iowa's defensive struggles. Not interior weakness (all jokes about scare-centers aside), but a lack of length on the perimeter and, to a lesser extent, a lack of lateral quickness. I'm not sure if there's any magical strategic solution to these fundamental weaknesses, unfortunately, apart from really pressing the opponent on the perimeter and hoping that the center (Basabe or White or Archie) can block shots when teams escape contain. That was essentially Iowa's strategy against Indiana, by the way, and we all know how that turned out. The unfortunate fact may be that Iowa just needs to wait until they can recruit a few more perimeter defenders with the necessary length and quickness. That's one reason it's so disappointing that Anthony Hubbard was unable to play for the Hawks this year. He would have provided excellent lateral quickness on defense and had the leaping ability and length to contest shots on the perimeter. He also would have been a great help on the boards, and scoring inside, and penetrating... Sigh... what could have been.