The former Wisconsin head coach reveals that he didn't want to leave Madison, but that "the sheet said I had to"

New Arkansas head football coach Bret Bielema revealed at a press conference today that his decision to leave the University of Wisconsin was not based on any personal desire, but rather that he had merely "followed the chart", specifically an elaborate life chart he uses to guide his every decision.

Bielema explained his decision: "Yeah, what happened was that after the Big 10 championship game, I looked at the chart, and there are like these rows and columns that tell you what to do when certain things happen. Well when we beat Nebraska, the rows and columns matched up and the chart said 'move to Arkansas'. I didn't really want to leave Madison and move to Fayetteville, but the chart said to go, so I went."

The chart, which Bielema had drawn up by a team of accountants, drinking buddies and psychics, lists combinations of unlikely events and then recommends actions should those combinations arise. "The idea is that when weird stuff goes down, I can rely on the chart to make smart decisions quickly," said Bielema. "That way I'm not wasting time trying to figure out what to do when, say, "Animal Hospital" sweeps the Emmys at the same time that Maryland and Rutgers join the Big 10. The chart says I chug a brewski in that scenario. Simple" 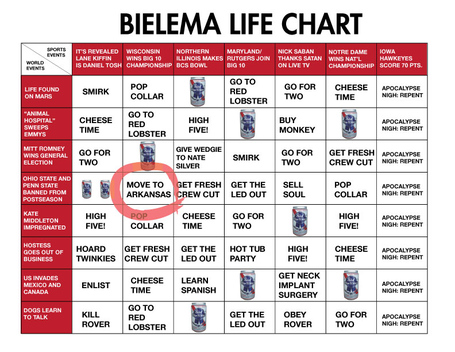 Bielema stressed to skeptical reporters that his decision was not at all influenced by considerations of money or the challenge of coaching in the SEC. "I really don't get what all the commotion is about. We've done the math on these things, and there must be a good reason the chart said I can't stay in Wisconsin. You think I want to go play LSU and Alabama every year? You think I want to recruit against Texas and Oklahoma instead of Minnesota and Iowa? No, but that's not the point. At some point, my personal preferences have to be put aside for the good of the chart."

The new Razorbacks head coach went on to explain that he developed the chart after seeing how well his two-point conversion chart worked for the Wisconsin football team. "I got some heat for using the chart a few years ago, but the team kept winning, so I thought: there must be something to this. That's when I had the brainstorm to use charts in other areas of life."

Bielema explained that his use of charts has gone beyond the merely strategic and that he has developed it into a new philosophy/quasi-religion that he calls "chartism".

"Living by the chart is just so... so freeing. You don't have to think, you don't have to worry -- just look at the row, look at the column, and boom, you know that it's time to get a fresh crew cut." Bielema has his general life chart, as well as specific sub-charts devoted to food, sex, clothing and many other topics. "Here, let me give you a starter charts. They'll change your life, I promise!"

The starry-eyed coach then proceeded to hand out pamphlets entitled "Is Chartism for You?" to the collected media. The pamphlet, produced by Bielema himself, consisted of a short history of his new religion and a simple life chart, every square of which recommended that the reader follow chartism. After handing out the pamphlets, Bielema then consulted his media relations chart, noticed that he had answered ten questions at the same time that the Pope had joined Twitter, and took the indicated action: flipping everyone the bird and fleeing on his Harley. As his form disappeared into the night, he could be heard to yell, "Sorry 'bout that guys, it wasn't me -- it was the cha-a-a-a-a-a-a-rt!"