INPIYLTI: Iowa Hawkeye Links To Read While You Wait For The World To End

It ends today. So, here's some Hawkeye news to keep you occupied until it comes.

Share All sharing options for: INPIYLTI: Iowa Hawkeye Links To Read While You Wait For The World To End

LET'S LOOK TO THE FUTURE (IF THERE IS ONE). The starting lineup and game notes are available for tomorrow's men's basketball game with Coppin State. Clemmons, Gesell, Marble, White and Woodbury. No changes or surprises. The game tips at noon at Carver-Hawkeye Arena. This is the last warm-up before shit gets real.

MCCAFFERY TALKED A BIT ABOUT THE TEAM'S PREVIOUS WIN OVER SCSU FOLLOWING THAT GAME. Josh Oglesby didn't play versus South Carolina State and was "dinged up." Fran added that he was proud of Marble's performance and his play thus far this season.

GABE OLASENI IS MAKING THE MOST OF HIS MINUTES. He had several career highs versus SCSU. Following the game, he said this about his performance, "I try not to think too much when I'm out there and good things happen. So don't let him score and whether he tries to dunk it or not, I'm going to go after it."

Gabe Olaseni's 6.4 blocks per 40 minutes are the 5th most in the nation among Division I players who have played 100+ minutes. #Hawkeyes

LISA BLUDER'S TEAM ROLLED MISSOURI STATE. Before the men tipped off, the ladies put on a show of their own. The Hawkeyes almost broke 100 and did break some records and set some personal bests on the night. In total, ""five players combined to establish 23 high water marks in 12 different categories." Iowa won 97-43.

SOME OF THOSE THAT BRAVED THE WEATHER WEDNESDAY NIGHT GOT A SPECIAL TREAT. Hawkeye Santa hats! 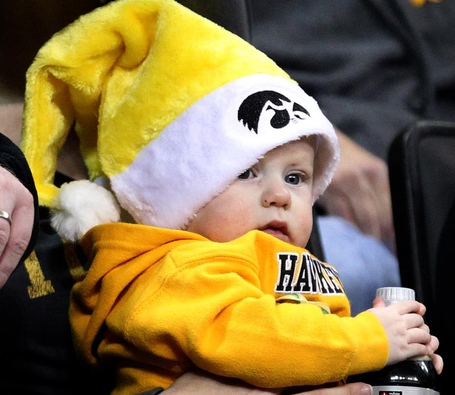 HOPEFULLY THAT LIGHTENS THE MOOD BEFORE WE TALK FOOTBALL. ESPN Big Ten football bloggers Adam Rittenberg and Brian Bennett handed out grades yesterday. Hawkeye Football finished the semester with a 1.41 GPA. There's a "D" for offense, a "C-" minus for defense, a "B-" for special teams and an overall grade of "D".

ALL HAIL KING FERENTZ. Forbes Magazine tabbed Kirk Ferentz the 5th most powerful coach in all of college football. Forbes' reasoning, his rather large contract. Money equals power. Ferentz's program did fall from the Top 20 most valuable programs. Iowa was rated #20 last year.

HAWKEYE VERBAL COMMIT NIC SHIMONEK SHOWED HIS SKILLS ON NATIONAL TELEVISION LAST NIGHT. It was the battle for the Texas 2A State Championship between Shimonek's Mildred team versus East Bernard. Shimonek's team was outmatched from the beginning and Bernard rolled to the title. Mildred could only generate 126 yards in the game and Shimonek was sacked six times. He did show off a strong arm at times and showed he can move a little. He also is the team's punter so perhaps Iowa has their man for short field punting services (btw, that's a joke, kinda).