The Badgers have apparently gone with the untested professional kicker as their new head football coach; will presumably run field goal-heavy offense

Share All sharing options for: Wisconsin to Hire Gary Anderson as Head Coach 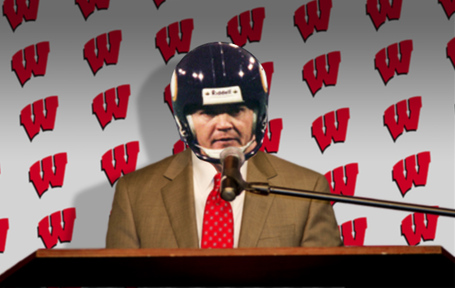 In a move that will no doubt shock the world of college football, the University of Wisconsin will apparently hire former professional kicker Gary Anderson as their new head coach later today. The news, which this BHGP reporter overheard while waiting in the line to buy milk at Hy-Vee in preparation for the coming snow storm, puts an end to days of speculation regarding whom Wisconsin athletic director Barry Alvarez would tab as the successor to Bret Bielema.

Anderson, 53, has no prior head coaching experience and his knowledge of football primarily concerns the marginal activity of kicking the ball, both through the uprights (on field goals) and from a tee (kick-offs), with the very occasional short kick on the ground (on-side kicks). The South African-born former Steeler, Eagle, 49er, Viking and Titan will face a steep learning curve as he transitions from his former role of waiting patiently and then kicking the ball with his foot, to his new job of managing the on-field and off-field operations of a major college football program.

Little is known at this time about Anderson's plans for the Wisconsin program, but if we can infer anything from his professional career, we can safely assume that the Badgers will run a field goal-intensive offense that emphasizes the importance of such little-utilized skills as drop-kicking, frequent on-side kicks, and strategic punting. We can also assume that the Badgers will transition from their current multiple-bar football helmets to Anderson's preferred one-bar football helmet, with the benefit of better visibility and air-flow, but the downside of much more frequent eye-gougings. Lastly, while Anderson will no doubt have a long and successful career at Wisconsin, it seems inevitable that the Badgers will somehow, someway break the hearts of Vikings fans everywhere late in his tenure as coach.

BHGP regrets to inform its readers that there was an error in this article. Further research has shown that Wisconsin hired Gary Anderson, the F1 race car driver, not Gary Anderson the kicker. BHGP regrets its mistake.

BHGP regrets to inform its readers that the previous update correcting the initial article itself needs to be corrected. Wisconsin has apparently hired the well-known Scottish darts thrower Gary Anderson as their head coach.

We are almost positive it's Gary Anderson, the cyclist from New Zealand, who will be the next head coach in Madison.

It turns out Anderson can also be spelled with an "e", which clarifies things considerably. The new coach will actually be Gary Andersen, the former head coach of Utah State.