Does BHGP Have A New Favorite Wrestler in WWE? We Just Might.

Share All sharing options for: Does BHGP Have A New Favorite Wrestler in WWE? We Just Might.

That ridiculously large human being throwing WWE Slammy Award*-winning superstar John Cena around the ring like a ragdoll is one Big E Langston.

* It's like a Grammy, except with more bodyslams. And probably more prestige.

Langston has been plying his trade in the WWE's minor leagues for a while now, mostly on the internet-only show NXT (a show too extreme, fast-paced, and cutting-edge for things like vowels), where he's been doing things like this:

He may want to stay off the mic, though:

Of course, Big E Langston is not his real name -- that would be ridiculous. (Although, for real, don't let Vince McMahon get a look at the rosters of most teams in the SEC; there's no telling what kind of deranged names he might concoct if he was able to get ideas from real-life sources like "Barkevious" or "Jadeveon.") No, Langston's real name is Ettore Ewen and Ewen was a former defensive lineman for... drumroll please... the Iowa Hawkeyes! Which is why we're already smitten with him -- two of our favorite things, Iowa athletics and pro wrestling, smashed together? It's irresistible.

Ewen had an undistinguished on-field career at Iowa; per Hawkeye Sports, he notched just 14 tackles and two sacks during his time at Iowa. Injuries ravaged his stay at Iowa -- serious injuries knocked him out of action in 2004 and 2005. He still seems happy about his time at Iowa, though, judging by his Twitter bio:

(Also: "Professional Mollywopper" is one of the greatest job titles ever.)

After Ewen left Iowa, he got into power-lifting in a big way... and was pretty good at it:

After power-lifting, he decided to do what any ridiculously strong and absurdly over-muscled dude would do: get into pro wrestling. And now he's in WWE, hossing it up and kicking John Cena's ass. Oh, happy day. Go get 'em, Big E. We'll be rooting for you, big guy.

Incidentally, this isn't even the first intersection of Iowa sports and the WWE that I've seen this weekend. Dolph Ziggler and Jack Thwagger Swagger, two decorated amateur wrestlers (Ziggler was a three-time MAC champion at Kent State as Nick Nemeth, while Swagger was an All-American at Oklahoma as Jake Hager) were in attendance at the Grapple at the Garden event in New York City on Sunday: 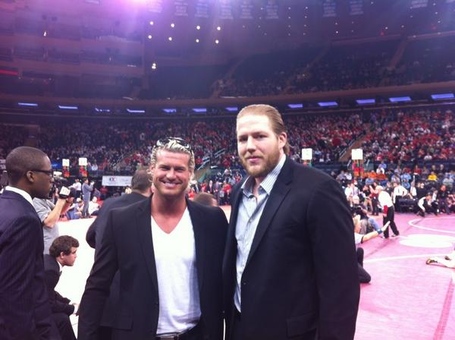 My worlds -- they're colliding!