Editor's Note: This piece feels relevant again, given the news of the the Big Ten Tournament's move to D.C.  Jim Delany's manifest destiny (is it reverse manifest destiny if he's going eastward rather than westward?) cannot be denied -- or stopped. -- RB

PISCATAWAY, NJ (AP) -- Despite recent victories in Maryland and New Jersey, Lord High Commissioner of the Big Ten Jim Delany declared yesterday that he is far from satisfied and will look to expand his football/media empire. In a top-secret briefing held at Big Ten high command's field headquarters, Delany outlined a vision for Big Ten expansion that promises to bring the Big Ten to New England, Quebec and beyond.

"At long last we have a secure foothold on the eastern seaboard" said Delany, the gold buttons on his immaculate commissioner's uniform gleaming in the sun. "With our new redoubts in New Jersey and Maryland, we are well disposed to expand our realm via land and sea and will not hesitate to do so."

Delany then clapped his hands and a servant in white livery produced a large map of the world with the arrayed forces of the college football conferences represented on it. Delany proceeded to demonstrate his strategy by feverishly moving miniature stacks of money and TV screens around on the board. 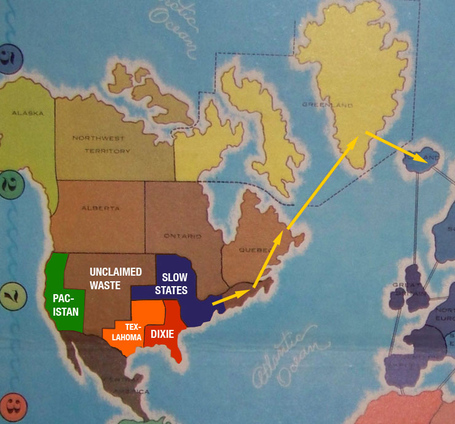 "First we will march through New York, capturing the crucial SUNY system in one fell swoop. Then, we will flank the concentrated ACC forces in Massachusetts and capture New Hampshire, Vermont and Maine, leaving Boston College contained and isolated. From there, it should be a simple matter to capture Quebec and Greenland." A maniacal glint then came into the eyes of the bushy-eyebrowed conference bureaucrat: "And once we have Greenland, it is but a hop, skip and a jump to Iceland... and Europe!"

Delany then adjusted his bicorne hat and directed his adjutants to prepare his white stallion, Fritz Crisler, for departure. As his mount was made ready, he explained his broader strategy. "The ACC and SEC are far too dug in along the Mason-Dixon line for our forces to make a frontal assault, and we regard the barren wastes to our west as scarcely worth the candle of an invasion. Therefore our only option is to move our forces across the sea to Europe, then circle around and attack from the south. No conference can sustain a two-front war, as the Conference USA demonstrated so memorably." 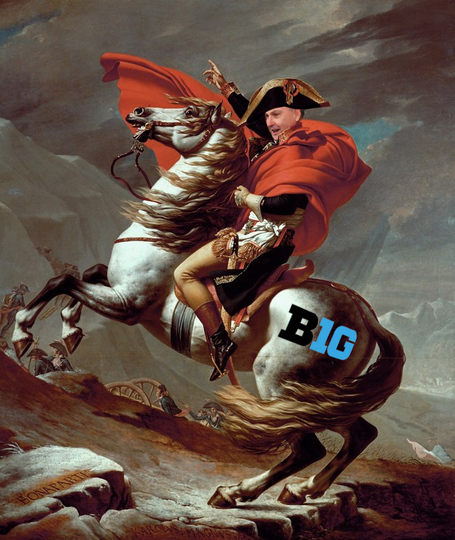 Delany and his horse, Fritz Crisler, leading the charge into Newark

Delany plans to direct his forces through Quebec, Greeland, Iceland and Europe, before reversing course through Africa and making a sea invasion of South America. "Those regions are virtually untouched by college football and should prove easy pickings. I already have verbal agreements with McGill University in Montreal, the University of Greenland in Nuuk, and Bifröst University in Iceland. And I can assure you that there are universities from Wales to Tunisia who are calling me day and night, begging to join our glorious coalition."

When asked what these new members might add to the conference, Delany explained that the benefits might not be immediately apparent. "Sure, Andorra is historically weak in football and only mediocre in basketball, but you need to understand my larger vision -- oh why can these mortals not understand my vision! Once we get the Big Ten Network into the crucial London, Paris, and Madrid TV markets, our media empire will be so vast that the world will look upon it and tremble in fear and awe."

Delany continued: "From Europe, we will target north Africa, then make a marine invasion of Argentina. We will proceed thence to Central America and Mexico, gaining fanatical Latin adherents as we go, finally making a full-scale assault on the Big 12 and SEC from the south. We anticipate Tuscaloosa, Alabama will be ours by the spring."

When asked whether he might possibly be overextending his forces, Delany scoffed. "There is nowhere that Big Ten football cannot and will not succeed. This golden goose cannot be killed, this money-printing machine cannot be sabotaged. My role model here is Gary Bettman, the visionary who saw before anyone else that places like Nashville and Atlanta needed hockey. The world needs the thrill-a-minute spectacle that is Big Ten football, and by God they're going to get it."

Delany brought the press conference to a swift close and had his armed guards roust the assembled press from his canvas officer's tent. As your humble correspondent was forced out of the canvas tent at bayonet point, a purple-faced Delany could be heard to shout: "Begone ye ink-stained wretches -- I have an empress to wed!" Delany's assistants later explained that the commissioner had scheduled his wedding to New Jersey native Nicole "Snooki" Polizzi shortly after the conference. Conference Pope Urban Meyer III led the proceedings and afterward crowned Delany as "Emperor of the Big Ten Network, Commissioner of the Big Ten Conference and Supreme Webmaster of BTN2GO.com."

When reached for comment, Pac 12 Obergruppenführer Larry Scott dismissed Delany's plans. "We our moving our forces into Kamchatka as we speak, and will be ready and waiting for Monsieur Delany as soon as he steps foot on European soil."