It's Not Plagiarism If You Link To It: Hawks Ready In Cancun, Plus More Conference Expansion Business

Share All sharing options for: It's Not Plagiarism If You Link To It: Hawks Ready In Cancun, Plus More Conference Expansion Business

THE HAWKEYES ARE ON A BUSINESS TRIP. That's per head man Fran McCaffery. Fran also mentioned nutrition as his team is surrounded by temptation in all-inclusive Cancun. Iowa will face Western Kentucky tonight, an NCAA tournament team last year. Iowa is favored by seven.

If the Hawkeyes pull out the win they will face the winner DePaul or Wichita State. If they lose, they get the loser of that match-up. The Shockers are the small favorite (-5.5) in that one and they too were an NCAA tournament team last season. DePaul and Wichita State tip at 6:00 pm (CST) and the Hawkeyes follow them (est. 8:30 pm CST). Both games can be viewed on the CBS Sports Network. Click here to find your channel on your cable/satellite provider.

THE FINAL TWO-DEEPS OF THE FOOTBALL SEASON ARE OUT. Mark Weisman is back as the number one running back. He's followed by Greg Garmon. (Damon Bullock is not listed.) There's no major changes besides Weisman. The game notes are also available. The game will be televised by ABC and the crew with the call is Mike Patrick, Ed Cunningham, and Jeannine Edwards.

LIKE LAST WEEK, WE'LL BUMP UP THE FOOTBALL RECRUITING LINK. Iowa might be poaching Illinois for a recruit. Reggie Spearman, once an Illinois verbal commit, visited and is interested in Iowa. Spearman, by name alone, is a must get at linebacker. Also, Delano Hill will visit Pitt but says he still likes Iowa. Safety is a position of need and Iowa has to find a way to keep the four-star prospect in fold.

WELCOME MARYLAND TO THE BIG TEN. Well, that escalated quickly. The University of Maryland's Board of Regents met yesterday morning to decided if they would leave the ACC to join the Big Ten. By afternoon, there was a press conference welcoming Maryland as the 13th member of the Big Ten.

"It's pretty obvious to us that the paradigm has shifted. It's not your father's Big Ten. It's probably not your father's ACC. The paradigm shift is that other conferences had [expanded], we had chosen not to, and we explored the collaboration [with the Pac-12]. It couldn't be executed. The Pac-12 couldn't do what they thought they could do."

Delany did not yet mention Rutgers, calling them "other aspects." It's reported by many news outlets that Rutgers will accept an invitation to become the league's 14th member today.

DOLLAR, DOLLAR BILLS Y'ALL. We're talkin' a lot of cash too. Maryland, currently in financial trouble, will be able to add back the seven athletic programs cut this summer. Pete Thamel writes that Maryland could see double in return from the Big Ten compared to the ACC. The numbers are staggering. Per another Thamel piece,

Frank the Tank also played with some numbers. While Maryland and Rutgers might not excite us Big Ten fans as much as Nebraska or even Penn State once did, the potential numbers ($$$) say they should. In an analysis of Big Ten expansion candidates using market size, cable fees and "fan intensity, " Maryland and Rutgers both make the top four. Texas, of course, is number one. Maryland, Rutgers and Nebraska are the other three. Jackpot Jim Delany. 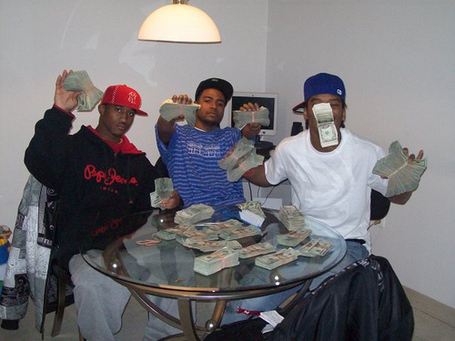 TODAY. Maryland had their day yesterday, today will be Rutgers' day. Steve Politi, of New Jersey dot com, calls Rutgers the "champions of realignment." Politi adds, "now, instead of facing a future with Temple and UCF on the schedule each year, they'll be playing for the same league title as Michigan and Ohio State."

ABOUT THE NEW ALIGNMENT. Maryland's President let the news slip that they will be joining the Big Ten Leaders Division. That would create a need to re-arrange cross-divisional rivals. Also, Delany mentioned that a nine game conference schedule is back on the table.