Voorhees set to return on Saturday the 13th

Share All sharing options for: Voorhees set to return on Saturday the 13th

Voorhees, who was booted off the team shortly after his freshman season with the Spartans, will dress and possibly start when Big Ten-rival Iowa comes to East Lansing this Saturday, the coach said.

"Jason has made his mistakes. We all have," Dantonio said. "The important thing is that he sounds contrite and he seems to have a good head on his shoulders." 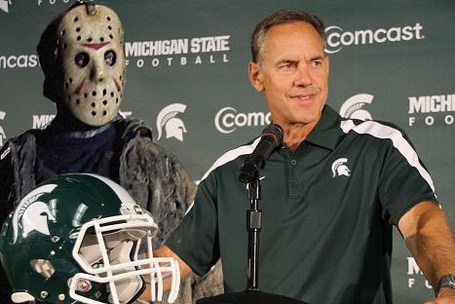 Voorhees came out of high school as an unheralded recruit, but ended up leaving an indelible impression on Michigan State coaches during summer camp.

Running backs coach Brad Salem raved about Voorhees cutting ability and memorably touted him as the best slasher in the state of Michigan. Defensive coordinator Pat Narduzzi was equally impressed with the way Voorhees knifed into the backfield from his linebacker spot.

Fans became equally enamored with Voorhees during his freshman season as the two-way player showcased an icy demeanor on the field and seemed impervious to pain.

Warning flags, however, began to shoot up almost immediately after Voorhees arrived on campus.

School records obtained by the Associated Press showed that Voorhees had 13 different roommates during his first year with the team. All were football players and none are currently with the program (12 of them have not even been seen since their freshman year, the 13th was admitted to a mental hospital and was unavailable for comment).

Even more damning for Voorhees was the revelation that he did not formally graduate from high school and instead spent the most formative years of his youth with his now-deceased mother.

The final straw came the following summer when an obviously intoxicated Voorhees emerged from a lake outside Springwood clutching the severed head of an elderly gentleman.

Dantonio remained mum on the incident even when pictures of the event circulated around the Internet. Voorhees' subsequent arrest, though, forced the Spartan head coach to make concessions and Dantonio announced a one-game suspension.

The suspension ended up continuing indefinitely as Voorhees was sentenced to two year's in prison for possession of drug paraphernalia (the severed head turned out to be a bong). 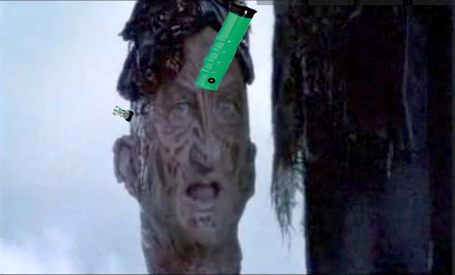 Voorhees was released in August on good behavior and was back in East Lansing studying criminology two weeks later.

That was good enough for Dantonio, who got a big laugh from the gathered media when he stated that ‘if getting high through the use of a severed head is illegal, then throw my butt in jail."

The timing of the move is questionable especially since the Spartans undertook a similar move two years earlier when cornerback Chris L. Rucker was reinstated to the team on the same day he was released from an eight-day prison sentence. The reinstatement occurred three days before the Spartans traveled to Iowa City to take on the Hawkeyes.

The Michigan State head man, though, was adamant that this decision had nothing to do with the opponent before throwing a barb at the Hawkeyes.

"This is not an Iowa thing, it's a Jason thing," Dantonio said as he smiled at Voorhees, who wore his trademark hockey mask and did not comment during the press conference. "Why don't you ask Coach Ferentz why he starts a serial killer as his placekicker."

Iowa junior kicker Mike Meyer is 10-of-11 on field goal tries this season and perfect on 11 point after tries. He is still at large.