Well, this isn't the news we wanted to wake up to on a Saturday morning. Turns out you can't Hyde from the law after all...

Micah Hyde, a senior cornerback for the Iowa Hawkeyes, was arrested Saturday morning for public intoxication and interference with official acts.

There are few details, but , who’s ninth in the Big Ten with five passes defended, was still in the Johnson County Jail as of 8:30 Saturday morning.

Sounds like a little of the ol' drunk and disorderly for Micah. 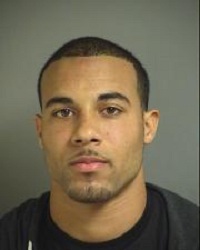 It's hard to say for certain what impact this might have on Hyde's status with the football team. On one hand, this is his first run-in with the law at Iowa and public intoxication is an exceedingly minor offense. (The "interference with official acts" could be more serious, depending on the details there.) On the other hand, he's a senior and a team captain, so he's held to a higher standard than most players. My guess? He's suspended for the Michigan State game next week, back for the Penn State game the following week.

Looks like we're in store for another start for The Greg Castillo Experience. And now it's probably even more important that B.J. Lowery is healthy for the MSU game; we really don't want to go into that game with Castillo and a freshman (Sean Draper? Kevin Buford?) as our starting cornerbacks.