One first quarter series shows how Mark Weisman and the left side of Iowa's offensive line destroyed the Gophers.

The following four plays come from one series of Iowa's game with Minnesota. This is what we're going to call the "Weisman Tape," a devastating series of runs that were so successful that Minnesota actually bit on a flea flicker on the first play of the very next series. 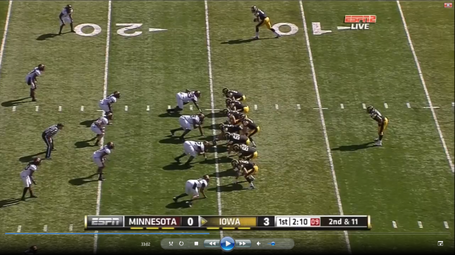 Iowa comes out on 2nd & 11 with two tight ends balanced, with Weisman as the lone back. Minnesota is in their stock 4-3 formation, given that it's a 2nd & long and Iowa could well pass the ball LOL j/k we're gonna run it down your throat. 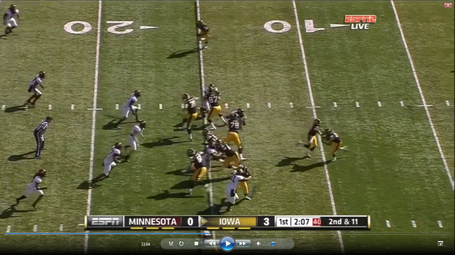 Weisman must be a NASCAR driver, because he spent the whole day turning left. Obviously, the Law Firm of Ferentz, Ferentz, and Davis saw something they liked on the left side. Specifically Matt Tobin and Brandon Scherff, I would assume.

At the snap, Weisman takes the handoff on an inside zone left. The line and tight ends, all seven of them, go hat on hat. The beauty of this play: Do you remember when C.J. Fiedorowicz couldn't block? On this play, he takes a defensive end, seals him off to the outside, and then plants him. That allows Scherff to go linebacker hunting. Hilarity ensues. 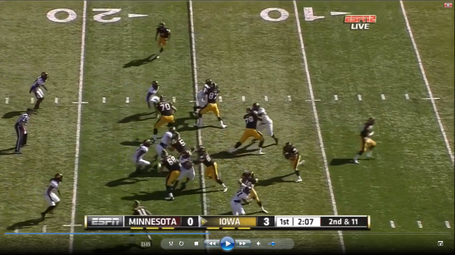 So Polish Hat has his man pinned outside, Tobin is driving his guy out of the picture, the opposite side of the line has actually created a cutback lane if Weisman ever really needed it, and Brandon Scherff (#68) is pretty sure he smells a rabbit. The key to this play is whether Keyvonte Martin-Manley gets to that cornerback. That's a good problem to have. 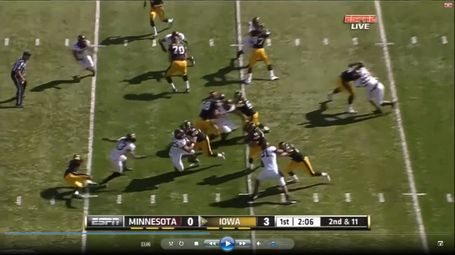 Matt Tobin, who last year was drawing unfavorable comparisons to a turnstile, has driven a defensive tackle two yards backwards and is in the process of planting his ass like a tulip bulb. Scherff and Ferentz have actually smashed two Minnesota defenders together in the hope that they would make one competent opponent. And, while Martin-Manley wasn't able to engage on the block and flailed wildly at the corner, it turns out the cornerback either doesn't understand how football works or wants nothing to do with tackling the 235-lb. guy in the Keith Byars shoulder pads coming his way. He takes an angle so absurd that it is both acute and obtuse. 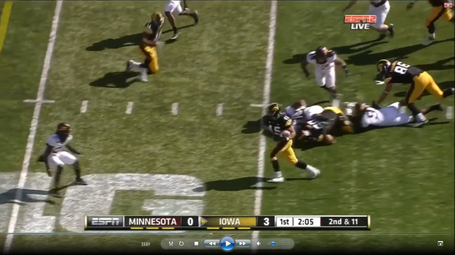 That leaves Weisman in the open field with a safety in front of him, who he quickly jettisoned on his way to a 27-yard run. He also struck the perfect pose for one of the plastic guys in the old school tabletop vibrating football game.

Let's go to the next play. No, really. It's the very next play. 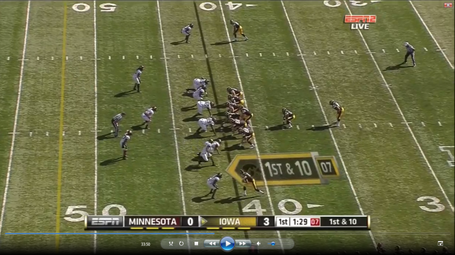 Davis decides that this play really needs a fullback, so Brad Rogers enters the game. The Hawkeyes put a tight end on the field side, but we all know where this is going. Minnesota counters by cheating both safeties up and showing blitz from both the inside right and outside left.

Did someone say outside left?

It doesn't look as dominant at first -- after all, Scherff is on the defensive end now, so he's not just rolling through linebackers like a Tiger tank -- but look where Tobin has his guy, and look where James Ferentz (#53) is before the handoff is even made. This leaves Ferentz and Rogers against two linebackers, with Keenan Davis locked in with the cornerback. There's nobody else in the picture with a prayer of making a play for the Gophers. 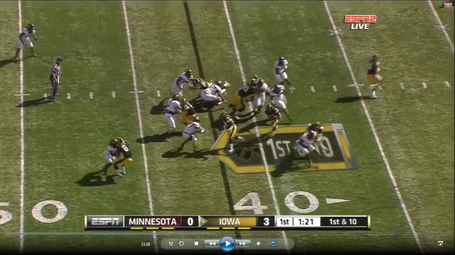 And...scene. Ferentz takes the MIKE linebacker, Rogers the WILL. But the real fun happens in just a second, because that WILL linebacker has a trick up his sleeve. 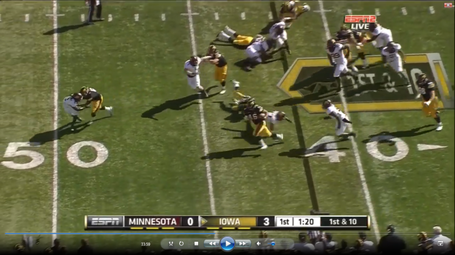 The WILL linebacker hits the O button and spins out of the Rogers block to the outside, which should put him in excellent position to make a play, except that the Hebrew Hammer is already a step by him as he gracefully dives to the ground, grasping at shoelaces. The lesson: Weisman is fast.

Also, note that Keenan Davis has now blocked our geometry-failing corner from the last play a full eight yards from the line of scrimmage. Weisman is in the open field with nobody there to touch him. 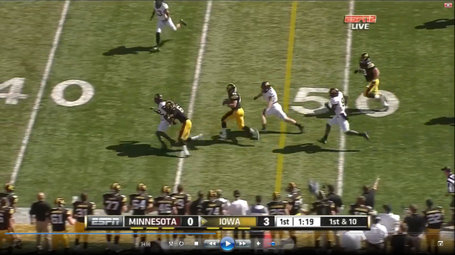 From there, Weis Guy takes over, slipping tacklers and plowing fools like Christian Okoye. But my favorite part of this play is that, when it's over, Keenan Davis does this: 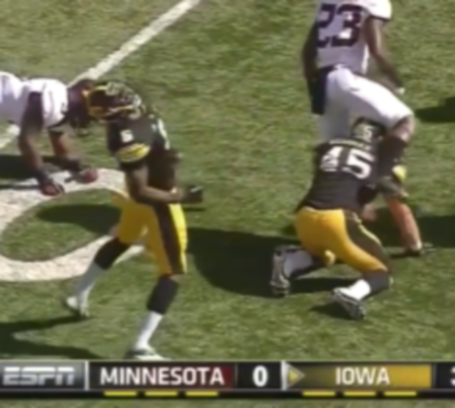 And Greg Davis says this:

Keenan is playing really well now. Not only with the football, but he's blocking better than he ever. In fact, Sunday I showed the offense a play that was an explosive run. The line James got us in the right play, the line picked up to start well. Keenan made it from a 12 yard play into a 30 yard play, and he was actually excited after the play. I told him the only reason I showed the play is that's the first time he's ever been excited about a block in his life. But he has really done a good job.

And he's absolutely right. Just a phenomenal effort by a guy who's been maligned by some. Certainly not by me. Absolutely not.

Play number three is the touchdown, after the change in direction at the end of the quarter. 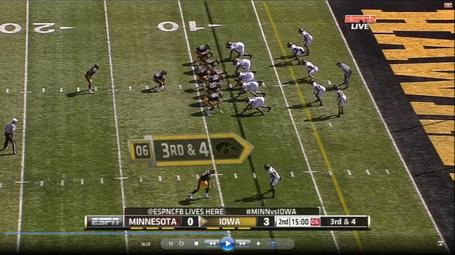 Minnesota's gotten desperate enough to stop the run that they're putting 10 in the box. Iowa goes jumbo, with two tight ends and a fullback. Well, two fullbacks, technically. 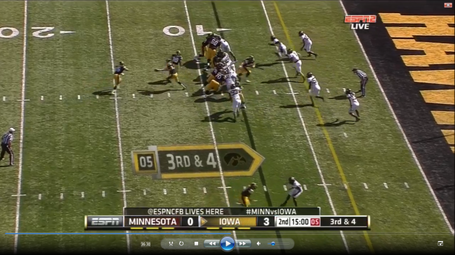 This play is slightly different than the last one: Zone stretch left. Just watch Ray Hamilton on this play. Hamilton is #82, the tight end on the left side of the line. At the snap, only Ferentz gets to the second level to handle the linebackers and safeties of Minnesota, which should be a problem. After all, they're linebackers and safeties, and should run circles around Iowa's big slow linemen.

Rogers elects to take on an interior block against a linebacker shooting the inside gap, and all the defensive end/linebacker on the edge would have to do is shed Hamilton and force the play back inside. Given that Iowa's line hadn't even moved Minnesota off the line of scrimmage, that appears likely. Except Ray Hamilton is good at football. 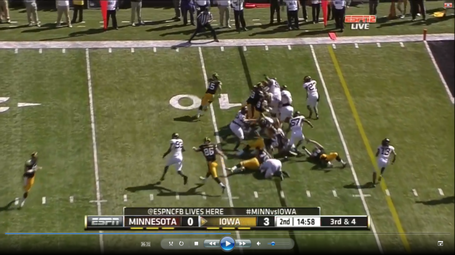 Hamilton gets himself outside the defensive end, turns inward, and walls off no less than four Gopher defenders while his neighbor, Brandon Scherff, blows up said defensive end. Where this play was doomed to failure as the end wrapped Weisman in his warm embrace, now there's only a safety to beat. And Weisman beats safeties like eggs. 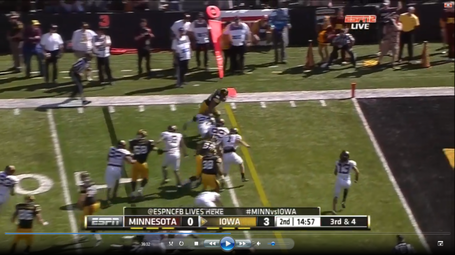 Missed ankle tackle (which is the only way to go at Weisman, to be fair) and it's six.

The best Iowa backs under Kirk Ferentz have a wide variety of physical characteristics; Fred Russell and Shonn Greene had little in common in either size or running style. They did have one overarching quality, a quality shared by Weisman: They were decisive at the line of scrimmage. There is no doubt where Weisman is going to go the second he gets the ball, and he hits the hole with such authority that, even if there is no actual hole, he's guaranteed something positive. Weisman isn't a one-cut runner or a guy you want running the counter, but he's excellent when the hole is there. And with this line as it's currently playing, those holes are everywhere.

There was one run buried in this sequence, one of the few runs in this series where Weisman was effectively stopped, where Minnesota took an interesting approach to handling Iowa's dominance on the left side of the line and, in doing so, may have exposed a problem for Iowa going forward. 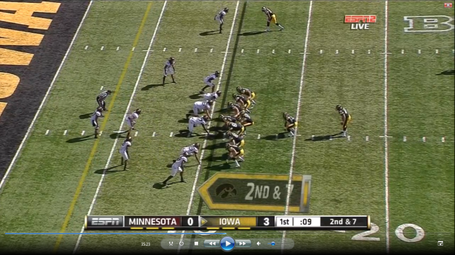 Again, Iowa went with their jumbo formation: two tight ends balanced, fullback, and one wideout. But Minnesota, which had been getting obliterated on the left side throughout the series, makes a peculiar move: The Gophers shift their defensive tackle right (from the offensive perspective) to put him directly over center James Ferentz instead of guard Matt Tobin. On its face, it looks like the Gophers are giving Iowa a hole right where the Hawks had been most effective. Minnesota also shows run blitz off both ends. 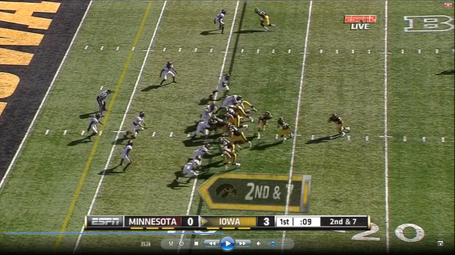 The defensive tackle opposite Ferentz slants hard left, back toward his usual position. Rather than passing him off to Tobin, Ferentz engages at the line of scrimmage and goes left with the defender. It's Matt Tobin who has to get to the second level and go after linebackers. Tobin's barely left the line of scrimmage, despite having nothing in his way.

Now, compare this post-snap with those first two runs. Tobin had been destroying that defender in one-on-one, with Ferentz jumping into the second level to take out linebackers. Minnesota's move forced them to exchange responsibilities and do what they don't do as well. 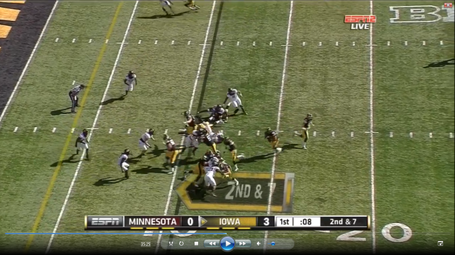 The tackle drags Ferentz into the hole that Tobin was usually blowing into the Minnesota defensive line. Meanwhile, Tobin is chasing linebackers, which is definitely not his strong suit. Rogers is sizing up a cornerback, justifiably not noticing that Ferentz needs help.

Tobin gets a guy, albeit with poor leverage because he's had to go so far to get there. Rogers got through the hole before it closed, but Weisman wasn't so lucky. There's a cutback lane that's ostensibly available, but that's not really Wesiman's bag. He's wrapped up and stopped for a gain of a couple.

The takeaway from this play: These guys really aren't interchangeable. James Ferentz is great at getting that initial push and going to the second level and hammering away at linebackers. Matt Tobin doesn't have the quickness to handle most linebackers without giving up some leverage, but he's a monster against defensive linemen. Expect other teams to try to take those two (and Blythe, when he returns) out of their comfort zone as much as possible. If they don't, Iowa's running game can be dominant.